Fellow Asian-Americans often ask me what it’s like to live in France as a minority. My response usually begins “Well, it’s not bad…but it’s not great…” France has a reputation for being one of the more xenophobic countries, and while I haven’t experienced blatant racism, I definitely feel more day-to-day discomfort than I do in the States.

I think part of this discomfort arises from the lack of diversity in France. It’s estimated that only 15% of the population is non-white, versus 47% in the US. Even more staggering, Asians only make up about 1.5% of the French population, almost four times less than the 5.6% in the US. My classroom demographics corroborate these statistics: of my 200+ students, only two are Asian.

I can’t speak for all Asians in France, and I don’t want to generalize. Instead, I want to share my unsettling experiences as a snapshot of life in France as a minority.

My Experience as an Asian in France

I speak French, thank you.

In the more touristy parts of France, shopkeepers and restaurant employees often address me in English, before I’ve even spoken. Because of my ethnicity, they simply assume that I don’t speak French. Some people may argue that their actions are justified–if most Asians who frequent their stores don’t speak French, it’s easier to start with English (would you speak in Mandarin to a white person in China, for example?). But, you can’t deny that this is only a reminder that you “don’t belong” and that people perceive you as different.

Another time, I was on the tram in Bordeaux, and I noticed girls about my age looking intently at me. As they got off, one of them brushed past and said sorry/excuse me in Mandarin. I could’ve been Japanese, Korean, Vietnamese, Laotian, etc., but they assumed that I was Chinese and that I didn’t speak French. I think they had innocuous intentions–maybe they just wanted to use the Mandarin they’d learned–but this interaction nonetheless made me feel like an outsider.

Not microaggressions, but more like plain rudeness or lack of empathy

A couple months ago, one of my temporary roommates and her boyfriend were over when we were having dinner. Naturally, we offered to share with them. I had made one of my signature dishes, broccoli and tofu, and everyone expressed enthusiasm for the tofu–except the boyfriend. He tried some, then declared that it was “weird” and refused to eat the rest. Keep in mind that we were under no obligation to invite them to join us in the first place, that his presence was announced pretty last-minute, and that the couple did not contribute to the meal in any way, even the dishes.

When I lived with a host family in Bordeaux, the mother and I were discussing refugees one day. Her response shocked me–she said that she understood they needed a place to go, but that they often ended up on the streets, and it wasn’t “very pretty to look at them.” She was thinking only of her own (minimal) discomfort and totally ignoring the life-threatening situations the refugees may have fled, and the difficulties of being homeless.

Again, on the tram in Bordeaux, a 5-7 year-old boy remarked that he “didn’t like the lady sitting next to him.” I was right next to him. And I’m pretty sure I didn’t smell that day or didn’t dress funny, so I can only attribute his remark to my Asian appearance. Also, since he voiced that thought audibly, he must’ve assumed that I didn’t understand French. His mother tried to play it off as “oh, you think the lady is pretty?” and I was too unsettled to say anything.

I’ve also experienced several instances of general yelling in Mandarin. I’ll run to catch the tram, and someone will scream “faster, faster!” in Chinese, or I’ll be jogging and people will make remarks, or strangers will greet me with “Nihao.”

When I arrived in Bordeaux, one of the first things I had to do was get phone service. I signed up with a company that offered 1GB of data and unlimited texts and calls for 20 euros a month. Ten days later, I was out of data–and I had only used 500MB. When I returned to the store, they claimed that I “must’ve misunderstood” the man who had set my plan up. I was fuming–even if I was a foreigner, I could definitely understand the difference between 1GB and 500MB. The store refused to give me more data, even though it was their mistake (which they also refused to admit). I left and changed service providers.

At the Dijon market, I was once looking for peaches near the end of season. One stand had some inexpensive and fresh Saturn peaches at first glance. But, as I was picking some up, I noticed most of them were moldy. So I did what anyone would do–I inspected the ones I’d already selected, and put the moldy ones back. The seller brusquely told me to stop (“arretez, arretez”), and confused, I asked “What? Stop picking?” He said “No one wants to buy the peaches you touch” (notice the “you”). So I put all my peaches down and said “Okay, no problem, I’ll go elsewhere.”

Another time in Dijon, I went to my private gym with a friend who was visiting from the States. He obviously wasn’t a member, but I figured it wasn’t a big deal if he didn’t use the gym equipment. There were very few people there since it was late at night. On our way out, one of the owners ran up to us and asked if my friend was a member. When I said no, he blew up and said he’d cancel my membership next time I brought non-members. He talked over me when I tried to explain that this friend didn’t even use the equipment, and I had only brought him along since he didn’t speak French and I didn’t want to leave him on his own. The owner continued to chew me out when we hadn’t disturbed anyone or anything in the gym. I doubt he would’ve treated me so poorly if I had been French. I doubt he would’ve even noticed my friend if we both had been white (my friend is also a minority).

I don’t want this to read like a list of complaints, or to give the impression that all of France is discriminatory–the country has plenty of open-minded, progressive people. Most days pass without incident. But, it’s undeniable that I experience uncomfortable encounters at a higher rate in France than in the US. In the 7.5 months I’ve spent in France, I faced 10+ microaggressions (or just plain racially-motivated aggressiveness). In the 13 months I spent in the US (July 2017-September 2018), I experienced 3 unsettling situations (1. “Nihao” as a greeting, 2. “Welcome to America” as a greeting, 3. “Are you Korean?” as a greeting).

Basically, if you’re an Asian-American in France, you should expect ruder and more frequent microaggressions than you do in the US, especially if you’re from a more liberal part of the States.

Some of the encounters I describe are ambiguous, and could actually not be motivated by racism. I’ll never know for sure. What I do know is that all of these encounters made me self-conscious of my Asian identity. All of these experiences made me feel like I didn’t belong, that I wasn’t respected, or that I was perceived differently. 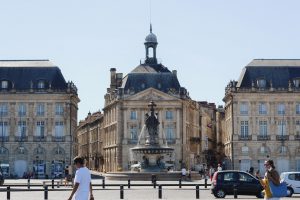 What I’m Going to Miss (or Not) About France 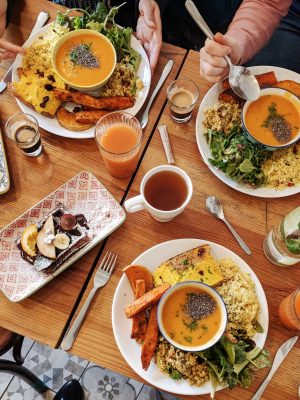 A Vegan/Vegetarian Guide to Bordeaux, France