I wasn’t sure what to expect this race. Less than two weeks before, I struggled to fall asleep several days in a row, clocking as little as 4 hours of shut-eye one night. During this period of sleep deprivation fog, I also went on a hiking trip. I was supposed to be tapering, not traipsing up and down mountains and making my legs sore.

I sometimes put a lot of pressure on myself to perform in races–I become so stressed about getting enough sleep and rest that I actually keep myself tossing and turning for hours. I’m constantly reminding myself that I run because I love it–and if I’m making myself miserable, it’s time to step back.

Eventually, I found some peace the week before the race. I was going to have fun and do my best, whatever that was. I arrived at the expo mid-afternoon on Saturday, the day before the race. It was at Porte de Versailles, a convention center on the outskirts of the 15th arrondissement. Despite there being 60,000 registrants, it took only a couple minutes for me to get my bib. I’d say there were at least 12 bib pickup stands, each organized by estimated start time and number, which divided up the traffic efficiently.

From there on, I grabbed the free race backpack and got my required bracelet (to show that we were real participants on the day of the race, and hadn’t copied a bib or something). The bracelet was one of those wristbands that don’t loosen once on, so don’t tighten it too much if you’re reading this for future editions of the race.

There were a TON of running-related vendors, but not a whole lot of free food/samples (the real priority haha). I snagged a couple free cookie packs and a key chain, but that was really it. There was a food court, which is probably why there wasn’t a lot of free food.

Note: since this is a French race, a physical/medical exam is required to participate. You can upload your medical certificate on the Time To portal beforehand (which I did), so you don’t have to worry about bringing it to the expo. See my post on getting a French race medical certificate for more info, including tips for making sure yours is valid. Thanks Henry for the above two photos!

Start Line of the Paris Marathon:

The race starts on the Champs Elysées, the major street leading to the Arc de Triomphe. I set up a meeting spot with a friend who came from Boston to run the race–we picked Le Duplex, a night club (lol) on Avenue Victor Hugo near the Arc de Triomphe. It was right past the bag drop/finish line area, and it was a great meeting spot since the part of the bar above ground was this black shell–so very noticeable, and good shelter from the wind/cold.

The weather for the 2019 Paris Marathon was actually very chilly for mid-April. It was only in the mid-30s at the start, and warmed up to maybe the high 40s/low 50s by the end. I was not very excited about the cold, but it really was ideal racing weather–once warmed up, your body wouldn’t need to expend energy trying to stay cool (though my arms were numb for the first 4 miles).

My friend Henry and I made our way to our 3:45 corral (while we were pretty sure we weren’t going to run 3:45, the 4:00 corral started half an hour later at 9:30, which is pretty late). The corrals close 15-20 minutes before the start, so be sure to come early. They are very strict about these closures, and we saw hordes of late runners jump the fence to reach the 3:30 corral (some even took the fence apart!).

There are porta potties in the corrals, but the lines get massive as early as 30 minutes before the start. They also run out of toilet paper, as I was delighted to discover 🙁 Get in line as early as possible, and maybe bring yourself some TP!

The atmosphere is pretty energizing though, with music blasting through the speakers, and lots of friendly runners around. The race also donates any clothes left at the start, so I wore some old leggings and a sweatshirt that I later let go of. I look pained, but I promise I’m having a good time! I’d heard that this race wasn’t the easiest, so I was bracing myself for a tough course. I was pleasantly surprised though–here’s why:

I started off with the intention of running 9:30 miles, but ended up clocking some sub-9s. I didn’t feel like I was overexerting myself, so I tried to keep a 9 minute pace or slightly quicker. Henry and I started together, but we split up within the first mile–he had run LA 3 weeks before and his goal was to enjoy the course.

I made it to the halfway point in 1:58:42, on track to run a sub 4-hour time (this was the goal in the back of my mind, but I wasn’t sure that I could do it after the sleep deprivation, and I wasn’t sure that I had done enough speed work). I was feeling relatively good, but I knew that the race wasn’t over until it was over. For my first marathon, I ran the first half in 2 hours, but slowed down by 8 minutes in the second half. In my second marathon, I also had a positive split of 8 minutes.

I kept chugging along though, and didn’t hit a wall until mile 21. Until that point, my pace had felt manageably challenging. The last 5 miles felt horrible. My calves and quads were on the verge of seizing up–I knew that if I pushed myself too hard, I’d end up with non-compliant legs. I could no longer keep the 9-minute pace, and really had to fight to keep moving.

You didn’t run 21 miles on pace to lose your sub-4 marathon now. I repeated this to myself so that I wouldn’t slow down too much. I’d wanted to run in under 4 hours since my first marathon, three years ago.

Nearing the finish line, I vaguely recall yelling. Probably some ugly “AHHHH” mixed with a massive grunt. It was one of those races that was satisfying because I know I couldn’t have run faster; I know I gave it my all. I was expecting a major feast at the finish line for such a big race. Unfortunately, there was really only water, fruit (apples, oranges, bananas, dried apricots), gingerbread (pain d’épices), pretzels, and Stimium recovery sticks (kind of like an energy gel). There were some street food vendors who took up the chance to reach a large, hungry client base though, and their prices were relatively cheap (I got a large order of fries for 3 euros).

Along the course, you could expect similar fare. There was always water, and usually some fruit; I didn’t grab any solid food, so I couldn’t tell you for sure. There were aid stations every 5km or so, but the first one wasn’t until about 4 miles in. Like most races in France, there also weren’t any energy gels or sports drinks at the fuel stops. I carried my CamelBak since the aid stations were infrequent and guzzled 1/3 of an Aptonia lemon isotone before the race (a drink like Gatorade). During the race, I consumed 1 Roctane Gu (miles 1-5), 2 Honey Stingers (miles 10-13 and 17-21), 1 pack of Stimium chews (miles 8-10), and 2 salt tablets (mile 7 and mile 15).

I loved this race–not only because I PR’ed, but also for how scenic the course was, and how well-run the event was. There was also a decent amount of spectators on the course, though it varied. It seemed to be either a sea of people, or only a sprinkling.

Of course, some points of improvement would be:

Performance-wise, I think it was my trail training that helped me finally run a sub-4 on this course. When I hit the hillier section along the Seine, I told myself that the inclines could be much worse. I also think that racing and training for the Barcelona Half Marathon 2 months before helped me get in a decent base of speedwork, even if I didn’t PR then. I had followed a similar pattern for the Lyon Half Marathon in October 2018 by training to race a 5k over the summer. The 5k didn’t go super well, but the track workouts I did were a strong foundation for a 1:45 finish in Lyon (my first sub-1:55 in 3 years!).

Based on my half marathon PR (1:44:03), race calculators say I should be capable of running faster marathons (around 3:40, though race predictors have never been super accurate for me). Still, I’m very happy with how the Paris Marathon went. Marathon training can be pretty volatile for me, as I’ve burned out in both previous training cycles. I only tasted similar fatigue once during this cycle, about 3 weeks out, and I took it easy from there.

I’m looking forward to chasing more PRs and challenges, but I’m happy to get some rest and travel for now. If you’re looking for an international spring marathon in 2020, registration is already open for Paris. Entry starts at 90 euros and goes up to around 130 by the fall. I’m already feeling nostalgic about this race, and can heartily recommend it.

If you ran Paris too, I’d love to hear about your experience. If you ran another race that you think I should consider, I’m all ears too! 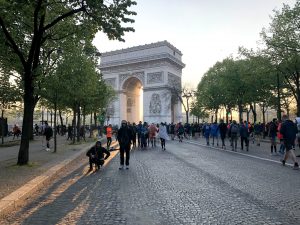 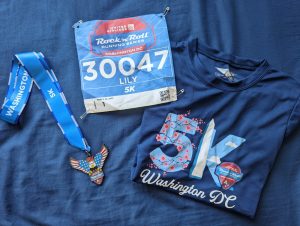 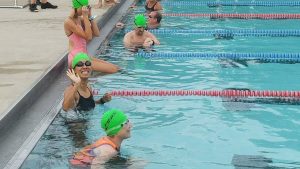