Last weekend, I ran the Columbus Half Marathon with 9,000 other runners (and 3,600 marathoners). One of those other runners just happened to be my brother, and it was his first half marathon. Columbus is my hometown and where my family still lives, so it was pretty special to run the same race as my brother, and have my parents come along to watch.

Here’s what I thought of the event, and my reflections on my performance. The expo was at the Columbus Convention Center in the Battelle Grand Ballroom, where a lot of local high school graduations take place (like mine did!). Packet pickup was open half the day Friday and all day Saturday. There’s no race-day pickup unless you sign up for it in advance and pay an extra fee.

Affordable parking was a little tough to find in the area, as the garages and lots charge $15/hour. My family ended up parking at North Market, which is an indoor food court/market with lots of local vendors. The first hour is only $1 if you buy something at the market and get your parking ticket stamped, so we just grabbed a $4 Belgian waffle, making a total of $5 for parking (proud to have saved $10 and have gotten a waffle in the process haha). If you’re not from the area, definitely check out North Market for lunch, or Brassica (Meditteranean bowls, vegan-friendly) and Eden Burger (vegan burgers). All are within walking distance of the expo. I haven’t been to Eden yet, but it looks heavenly!

The expo itself was well-organized, and getting our bibs was quick. We arrived around 10:30am on Saturday, and there was no line. There were a ton of vendors, but not a lot of free stuff unfortunately :/ (I’m all about the free food sample life). I thought it was cool that they had Goodwill there though, and you could buy workout clothes for $4 each. They were specifically advertising the “throwaway sweats,” or the old sweats you wear to the start line to stay warm, and discard before you start running (don’t worry, everything gets collected and donated to the local thrift stores!). It was honestly a great business idea as Goodwill made money on sweats that would later be donated back to them. Before I talk about the actual course, I’d be remiss not to mention the early start time of 7:30am. It was still dark outside when we started (which I guess worked well for the fireworks that went off at the start). We had to wake up at 5am to get downtown on time, find parking, and warm up. I’d heard stories of people getting stuck in traffic and having to run to the start line, and I didn’t want that to be us! Luckily, we found parking around 6am that was right next to the starting area, and cost $10 (pricey, but worth it for the convenience). The traffic was also not as bad as I’d expected, probably because we arrived almost 1.5 hours early.

The course itself was pretty flat, and my Garmin only registered 292ft elevation gain. There were a couple inclines, but nothing really too noticeable–except the one around mile 12, where you’re really feeling it.

We basically ran a loop around downtown Columbus, though parts of the course were more residential. One thing that was interesting was that the full marathon course was basically the same as the half until mile 12.5 (they went on to do another loop elsewhere). This made it easier to find a pacing team for both races–they just had a full marathon pacing team, and the half marathon runners were to go with the marathon group that had double the time they wanted.

This race is also different in that it benefits the Nationwide Children’s Hospital, and this partnership is very apparent throughout the course. The race names Patient Champions, kids battling a major/chronic illness, and each mile is dedicated to a Champion. During the race, the Champion is at their mile giving high fives to the runners with their family and friends. There’s also an Encore Mile, where all the Champions from past years are giving high fives. It was a pretty cool way to get these kids involved and show them the excitement of such a big event.

Overall, the course was well-marked, flat, and lined with spectators, so there’s not much to complain about! There were ample water stops–I’d almost say there were too many, compared to the European races haha. For the 13.1 miles, we had 9 fuel stations with Gatorade and water. There was one stop around mile 8 that had Gu Energy Gels (the citrus is amazing).

At the finish, there was some solid food, such as bagels, goldfish crackers, bananas, apples, etc. I only had a banana, but there were definitely lots of options. I only wish that they hadn’t been handing out plastic bags to carry the food, and instead used paper.

Registration was incredibly pricey ($145 including fees for the half marathon). I can’t see the price breakdown anymore on the site, but I believe that this highest price bracket began at the end of July. If you signed up earlier, I think you could’ve gotten prices as low as $75. They do tack on a $10 fee, so just be aware of that before you sign up. Since this race benefited the Children’s Hospital, I get why it was expensive, so I’m not upset about it–it’s just something to know!

With our registration, we got a fitted cotton t-shirt and finisher’s medal. The t-shirt does run slightly small, so I’d size up if you like baggier tees. I just got my normal size anyways, but it does feel tighter in the shoulders. The medal isn’t the prettiest I’ve ever gotten, but it’s also not the worst–nothing remarkable here.

*This section contains affiliate links, meaning I may earn a small commission on any purchases you make. This doesn’t cost you any extra.*

I ran in my trusty Brooks Launch 5s, but these were pretty beat up at this point. I’m excited to start wearing my Launch 6s after my routine post-race break from running.

I used my Garmin Vivoactive 3 music to track the run, and fueled with one Roctane gu before the race, a French pâte de fruit around mile 5, and one salt pill around mile 7. I would’ve had a Honey Stinger around mile 8-9, but I wasn’t feeling great and didn’t think I could get it down. I knew going into this race that I wasn’t in PR shape, having come off of my summer ankle injury. I wasn’t able to do really any speed workouts in the build-up to this race–either I wasn’t feeling well the day I wanted to do speedwork, so I just did a normal run, or I did the speedwork, but at a lot slower pace that I wanted.

I think my problem was two-fold: one, that I regained mileage too quickly. I went from running 7 miles in July to 29mi in August to 64mi in September. I probably put too much stress on my body, and this was evidenced my weird IT band and hamstring aches. I think I should’ve given myself another month to build up to half marathon distance.

My second problem was that I don’t run frequently enough to do quality speedwork. I usually run twice a week, and one of those runs is often a long run, and the other a regular run. There’s not really space for a speed workout, as I can’t only be doing long runs and speedwork. When I finally got back down to 1:45 in Lyon last year, I’d spent the entire summer doing a weekly track workout. I had also run around 3 times/week for a couple months without runs longer than 6 miles.

For my next race, I want to focus on running more frequently, but for shorter distances (at least as a base). My brother ran this race in 1:40:16 !! (7:39/mi or 4:45/km), and he didn’t do any long runs at all–he just had a strong base from his high school cross country training, where they probably do 30 miles/week. He ran a fantastic race, speeding up the entire way (AND this was after he’d raced his last cross country 5k the day before!).

I’m not sure I’d want to go into a half marathon without doing any long runs at all, but I do want to focus more on weekly mileage instead of long run mileage. I did my first half marathon my senior year of high school in 1:51, after only doing one long run of 10 miles–similar to my brother, I just had good weekly base mileage from track season.

It’s been 4 years since I’ve run a half marathon PR, and I know a sub 1:44 is somewhere in me. I’m not sure what my spring racing will look like yet, but I definitely want to try seriously for a half marathon PR. I don’t think I’ve taken it seriously enough yet–for a couple of years, I assumed that I could just do steady state and long runs, and somehow get PRs. This was probably because I actually only did one speed workout for my 1:44 PR in 2015, but I think a whole host of other factors led to that awesome race (sprint triathlon training, primarily). I know I can’t just ignore specialized training and magically get faster anymore.

Performance-wise, this race was disappointing since I was expecting a lot more out of my fall (I know my time is still decent, as I finished in the top 20% overall, but I’m always looking to improve!). I thought I’d be able to run a sub-48min 10k and maybe PR in the half. I also put more pressure on myself since I’m not currently working full-time, so I feel like I should be running faster; I have way more free time than the average working adult. But I also have to accept that I’m also going through a life transition, and recovering from injury–both of which take time and impact performance.

Overall, I’m still glad that this race happened though, as it was really lovely to be able to make this a family event. Next time, I’m going to be in shape enough to keep up with my brother 🙂

Overall, this is a well-organized event for a good cause, and there’s lots of energy on the flat course. I would definitely recommend! 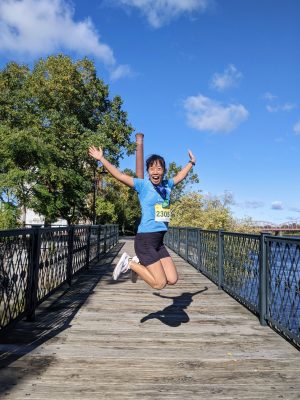 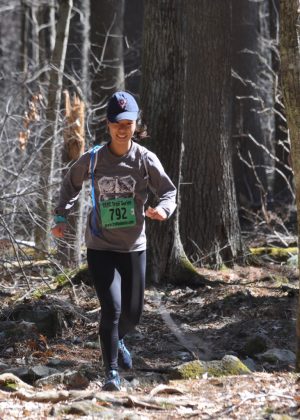 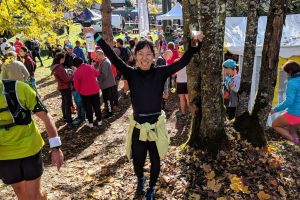