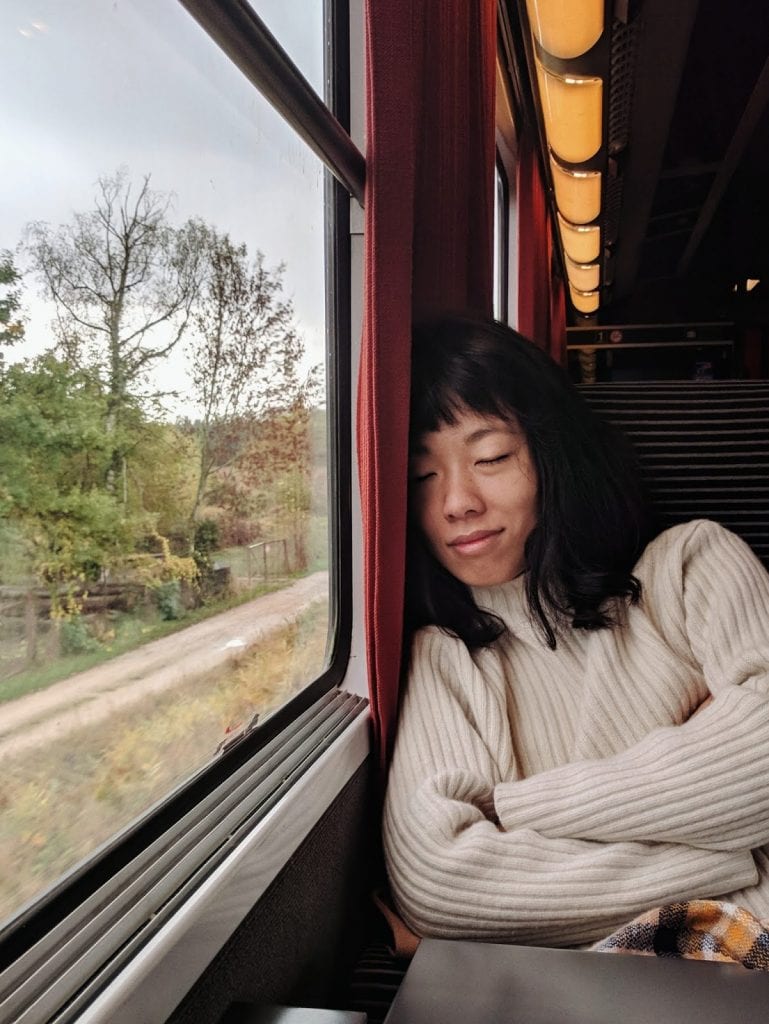 As an English lectrice in Dijon last year, I had a decent amount of free time, and I spent a lot of it exploring nearby cities. Burgundy is actually a prime starting point for exploring very different regions in France–it’s right between Alsace, known for its colorful houses and German influence, and the Rhône-Alpes, which offers mountain views and clear waters. For those hoping to go beyond France, Switzerland is only a couple hours away, and taking a flight from Paris isn’t too complicated either.

During my time in Dijon, I did a decent amount of research on places I could visit without a car and on a budget. To help those currently in the city (and to reminisce haha), I’ve compiled my 10 favorite spots for day/weekend trips, and given you a rundown on each destination.

These cities are all within 2.5 hours away by train, so you can make any individual visit in a day. There are some places, however, where I recommend spending at least a night. If I stayed overnight and had a particularly good experience, I linked my Airbnb/hotel. These links are affiliate links, meaning I earn a small commission on any bookings you make. This doesn’t cost you any extra 🙂

The roundtrip ticket costs are estimates, and can vary significantly based when you book, your age, and whether you have a carte jeune (discount pass for those 12-25 years old). The lower end of the range will be for carte jeune holders, and the middle range for those 12-25 without the card, and the higher end for those over 25. The carte jeune is 50€ and gives you a guaranteed 30% off on the TGV (the TER/regional train is already 50% off for those under 26). If you plan to take more than 3 TGV trips in a year, I would highly recommend getting one.

My suggestions on “what to do” and “what to eat” are by no means comprehensive. They’re actually probably very biased, as I’m picky about activities and have a penchant for vegan food.

With that in mind, here’s an overview of 10 cities I’ll go over in this post (I didn’t include Paris as I thought it was too obvious): 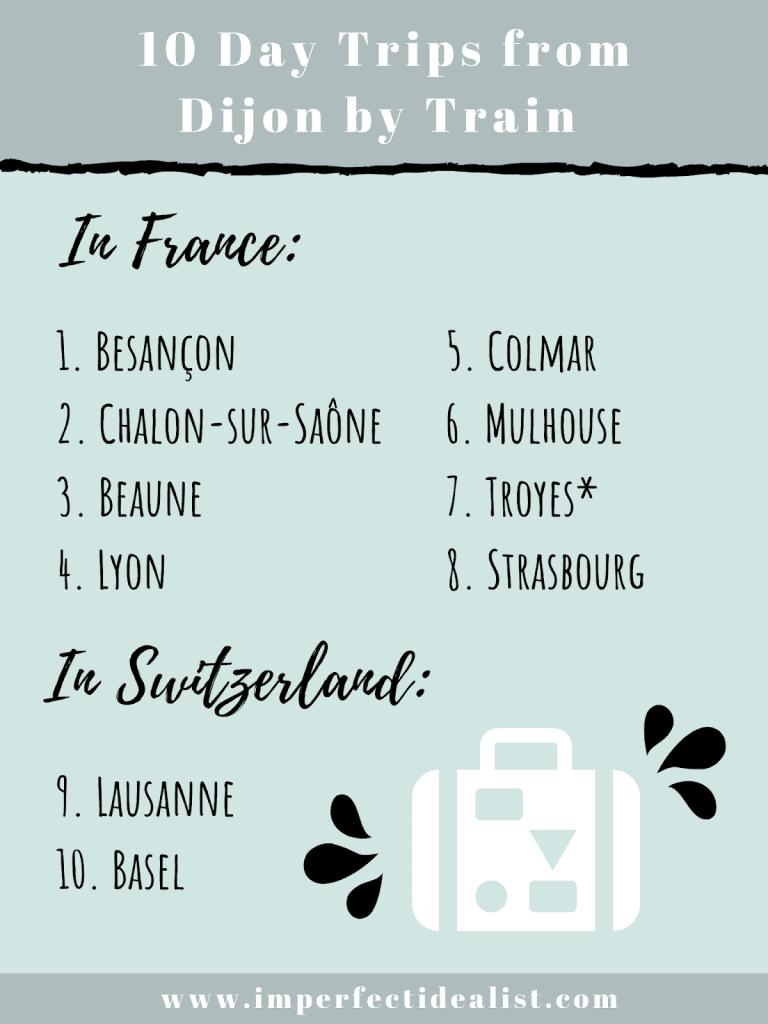 DAY TRIPS FROM DIJON (WITHIN IN FRANCE)

Population: 116,676
Distance: 1 hour
Train stop: Besançon Viotte (NOT Besançon Franche-Comté TGV)
Roundtrip cost: 15-30€
This town is one of the most underrated gems in France, in my opinion. I came 3 times over the course of my year in Dijon! The city is very walkable, there’s good (vegan) food, and there’s amazing views from the fort overlooking the city. If you’re into hiking or trail running, there are also some moderately difficult and scenic trails.
What to do:
Where to eat:
Gloria Mea Fides–AMAZING vegan burgers (the classic is the best)
Öst Café–very aesthetic veggie café with juices, bowls, vegan desserts
Where to stay:
Besançon is very doable in a day, but I stayed in this Airbnb overnight 2 of the 3 times I came, mostly to enjoy the city more. It was around $25/night and the host was the loveliest older woman–she was so hospitable and sweet to talk with. If you don’t have an Airbnb account yet, you can sign up with my referral code to get $40 off your first booking (my Airbnb account is in USD, but the currency will convert accordingly). 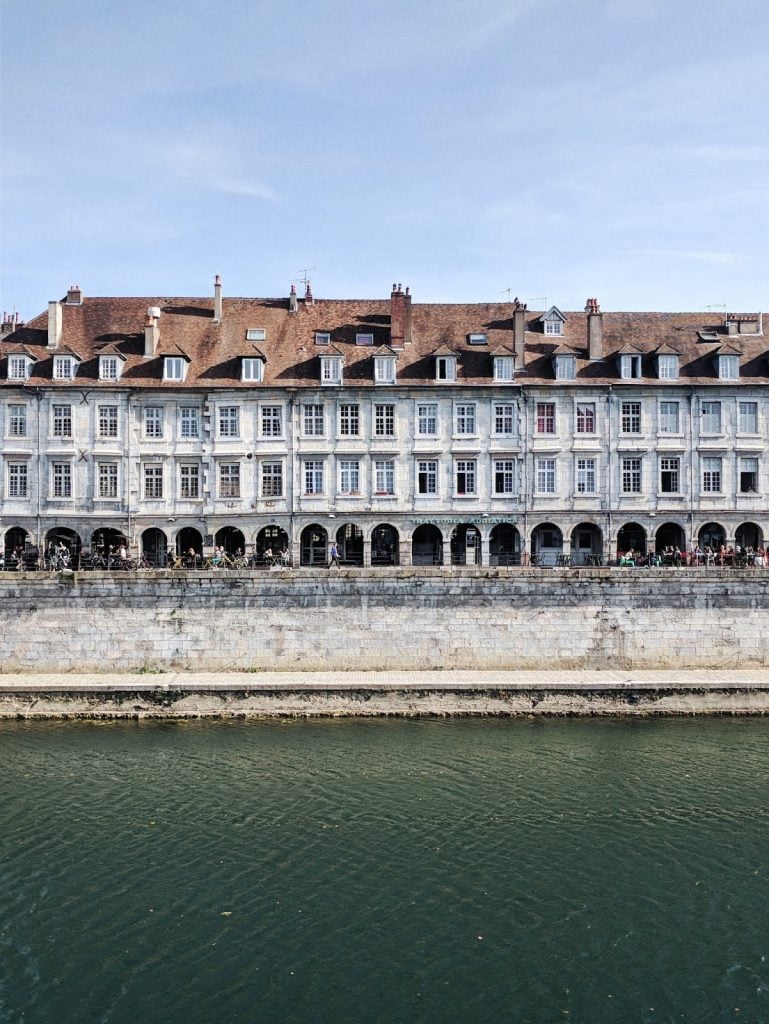 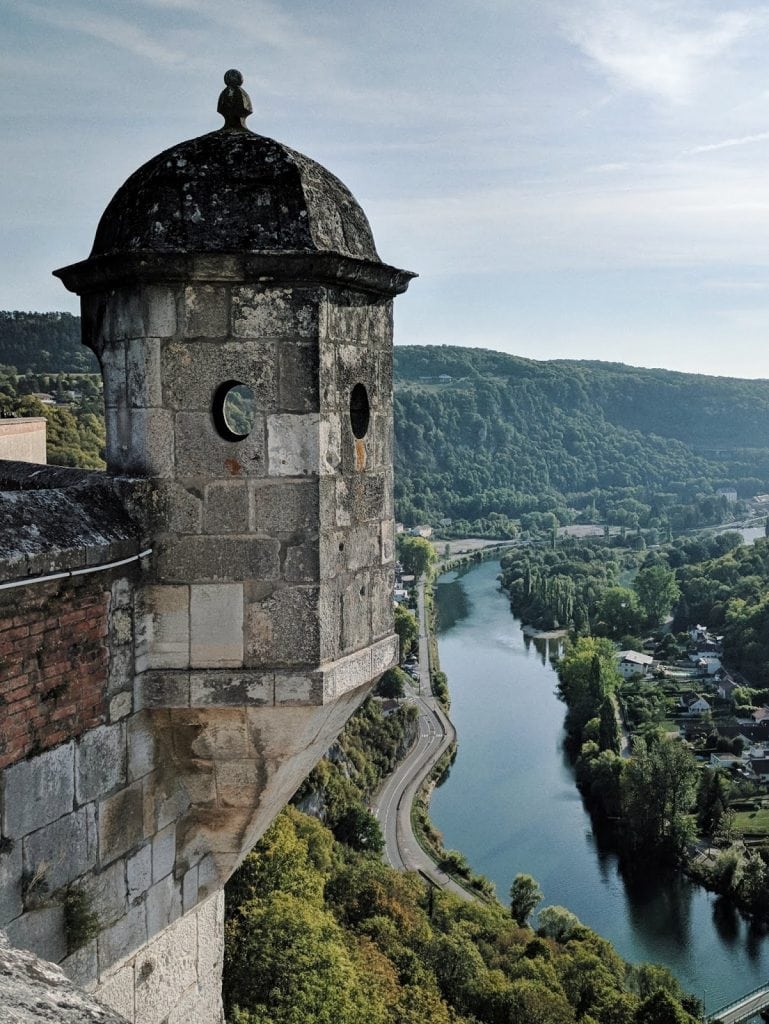 Chalon is very small, but it’s very charming–come here peaceful walks along the river and through the quaint city center. 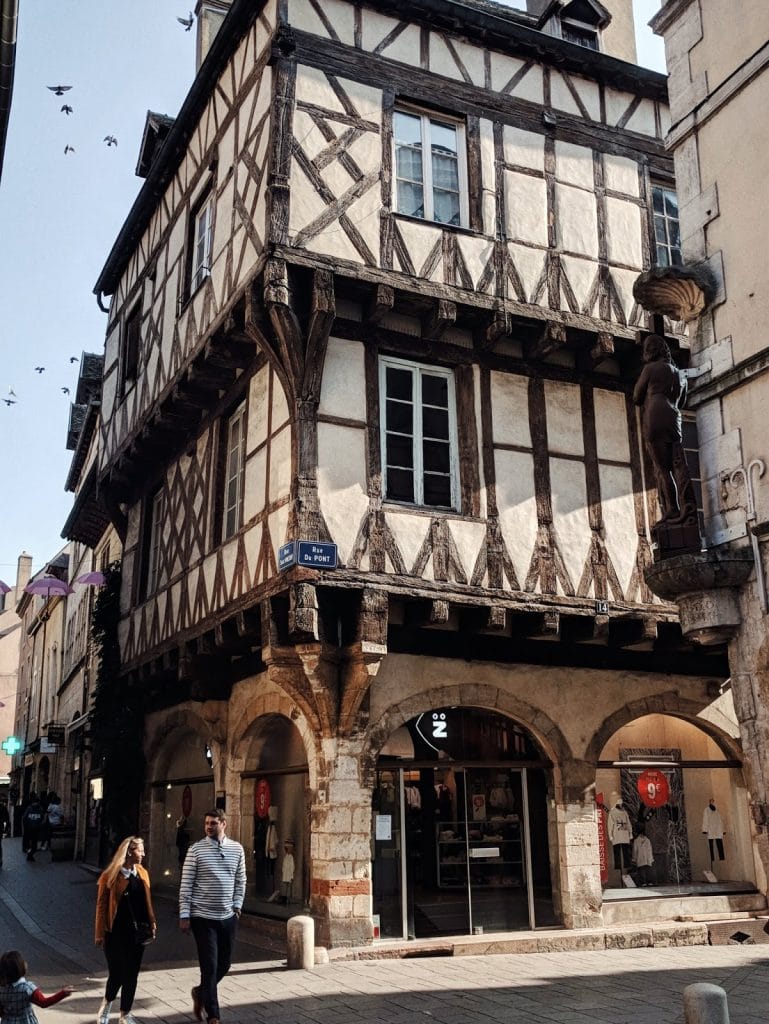 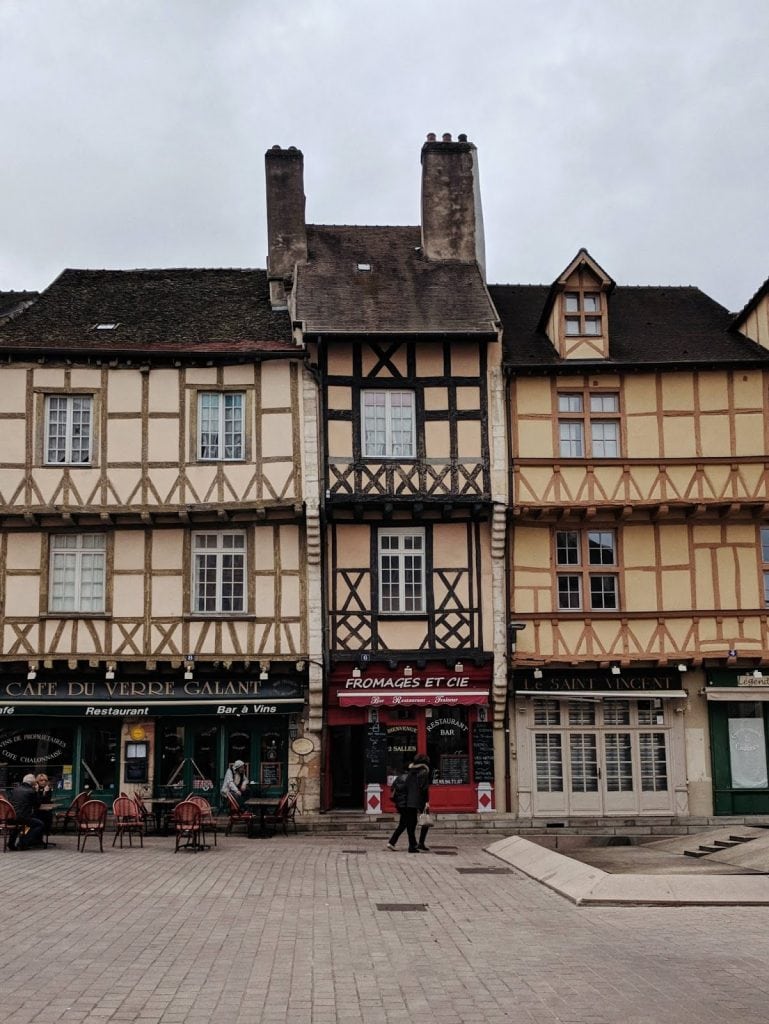 Beaune is a classic recommendation for day trips from Dijon–it’s a very small town best known for its wines.

I’ve never actually eaten anything in Beaune, but you can try some traditional Burgundy cuisine, if you desire. A big favorite is escargots, or snails. They’re drenched in butter and herbs, so they’re actually quite tasty (I made a flexitarian exception to try some haha). Unfortunately, they can be quite expensive in restaurants for the amount of food you get–if you want to save money, consider getting some frozen ones from the supermarket and heating them up in the oven; this is what I did.

The main square is also full of classic French restaurants, so you can give those a try too. 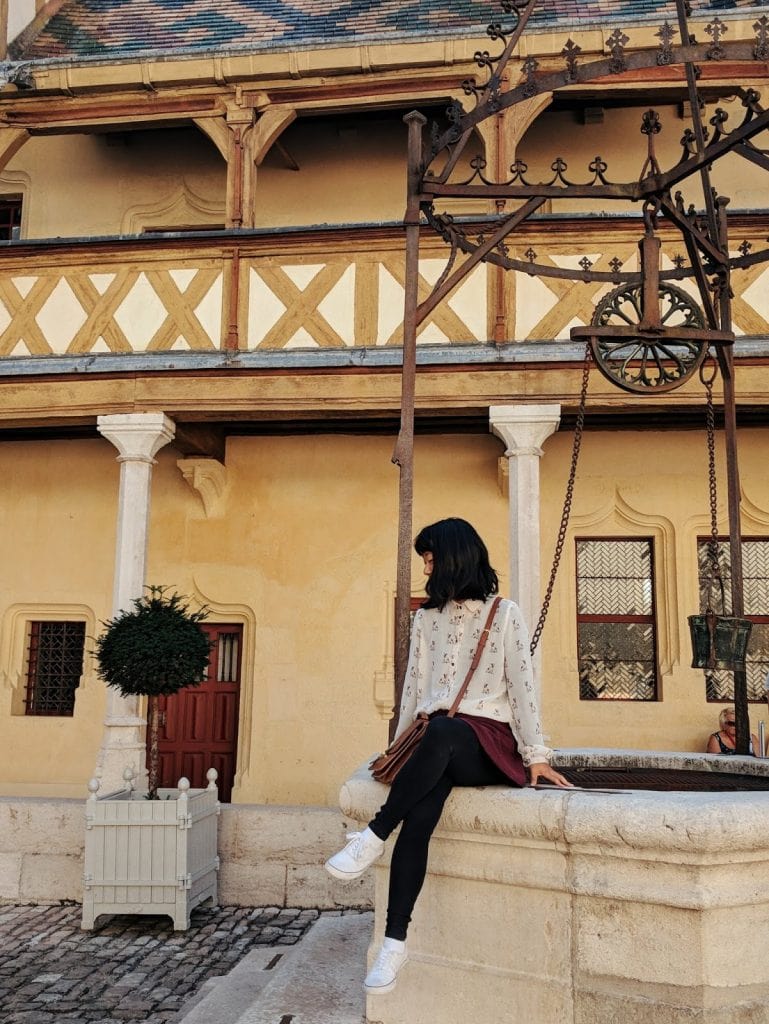 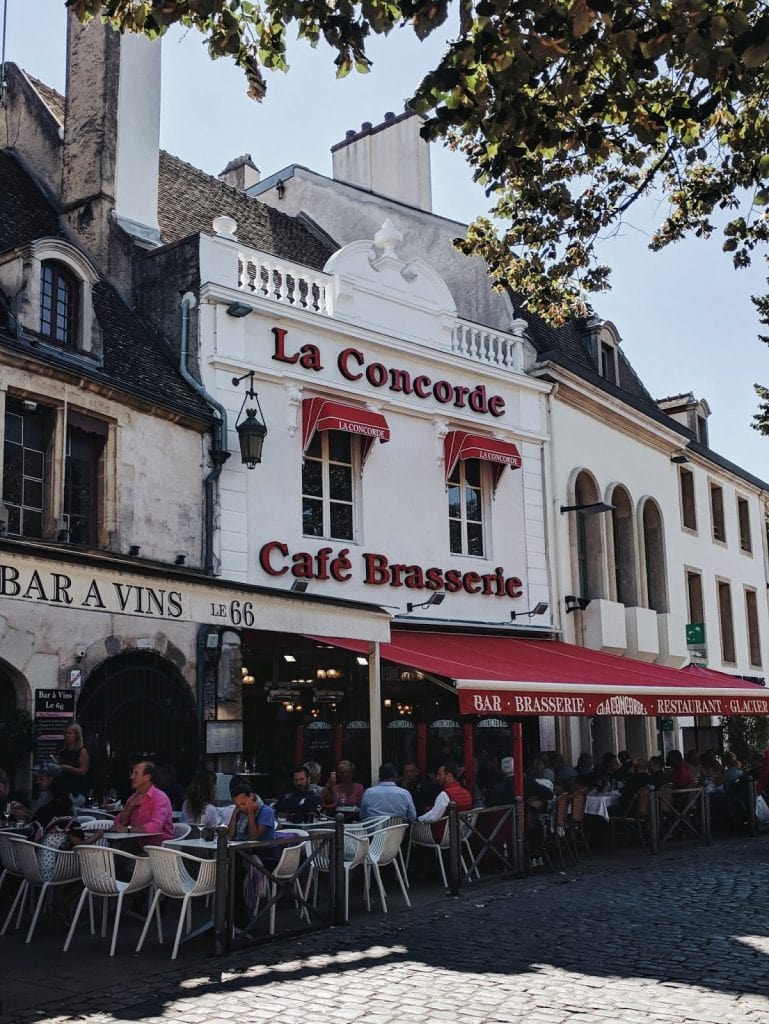 Lyon is one of my favorite cities in France–the river views are so lovely, the old town is always bustling with people, and there’s a lot to do given the size of the city, but it’s still very walkable

There are a plethora of Airbnbs and hotels, but if you want something more unique, some Airbnb hosts offer stays on their boats along the two rivers running through the city. Again, if you don’t have an Airbnb account yet, you can sign up with my referral code to get $40 off your first booking (my Airbnb account is in USD, but the currency will convert accordingly). 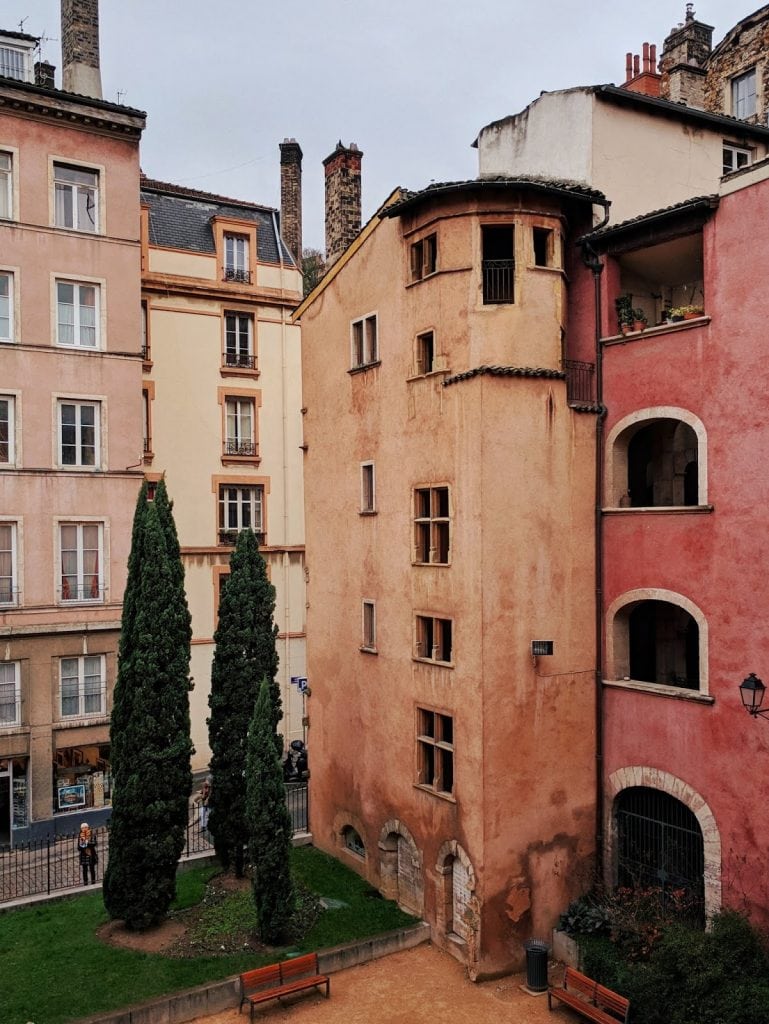 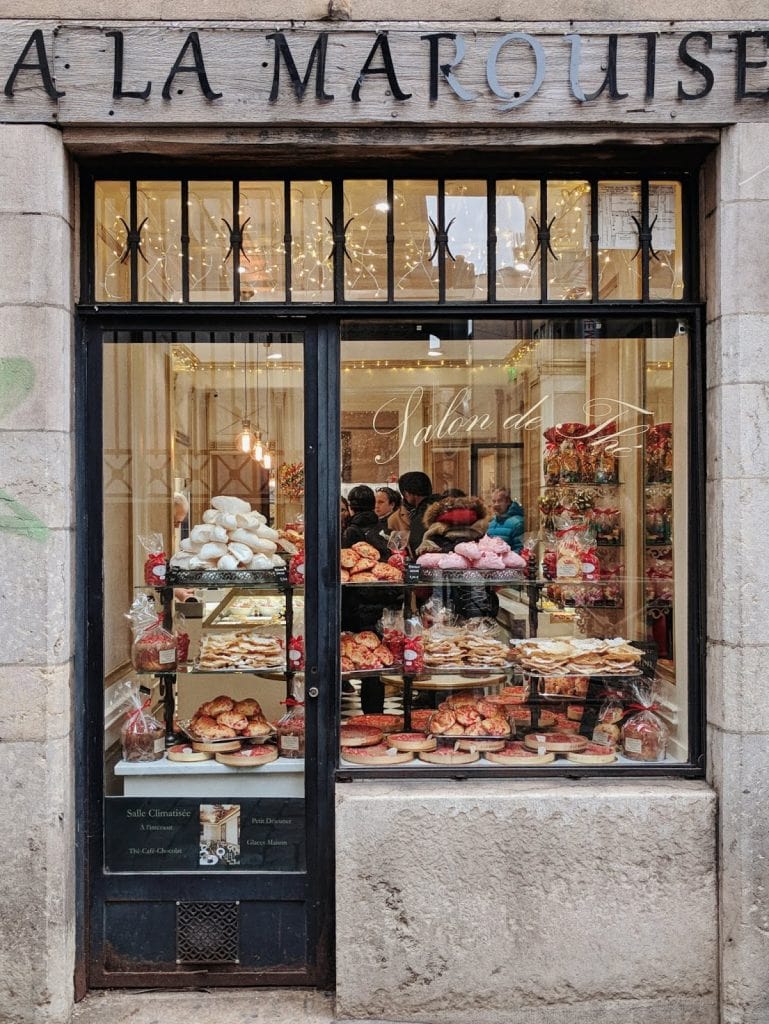 lots of pink praline brioche in the window (*drools*)

Colmar is trendy destination in France, and for good reason–the colorful houses seem straight out of a fairytale, and the healthy dose of Christmas decorations only add to the charm 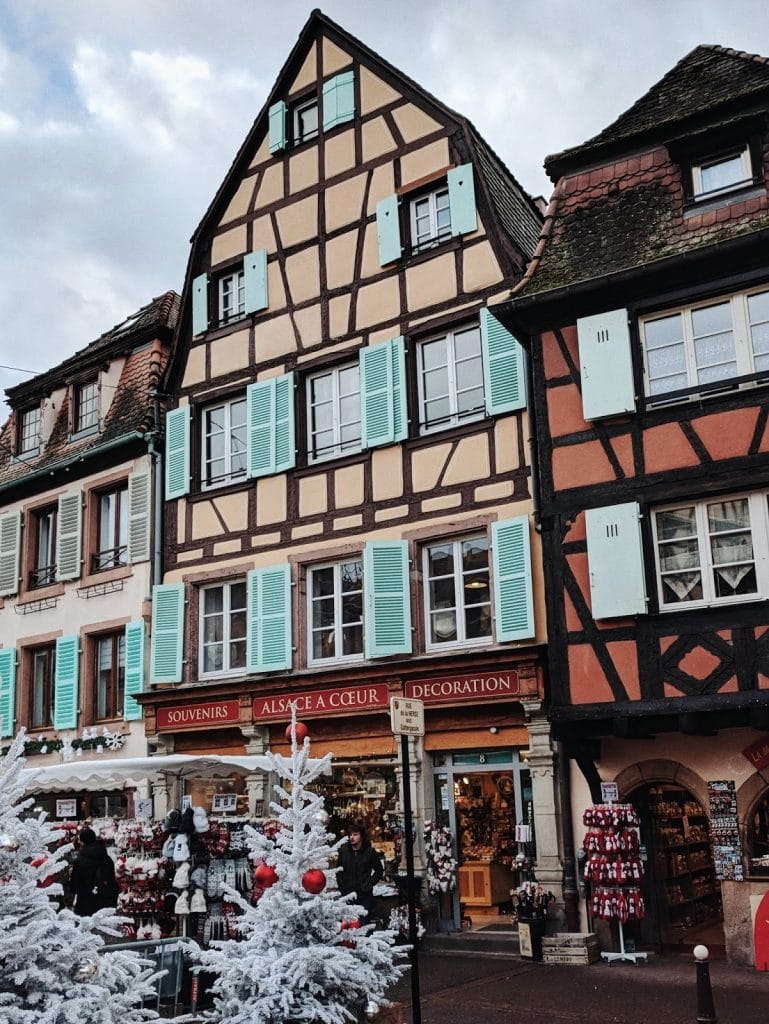 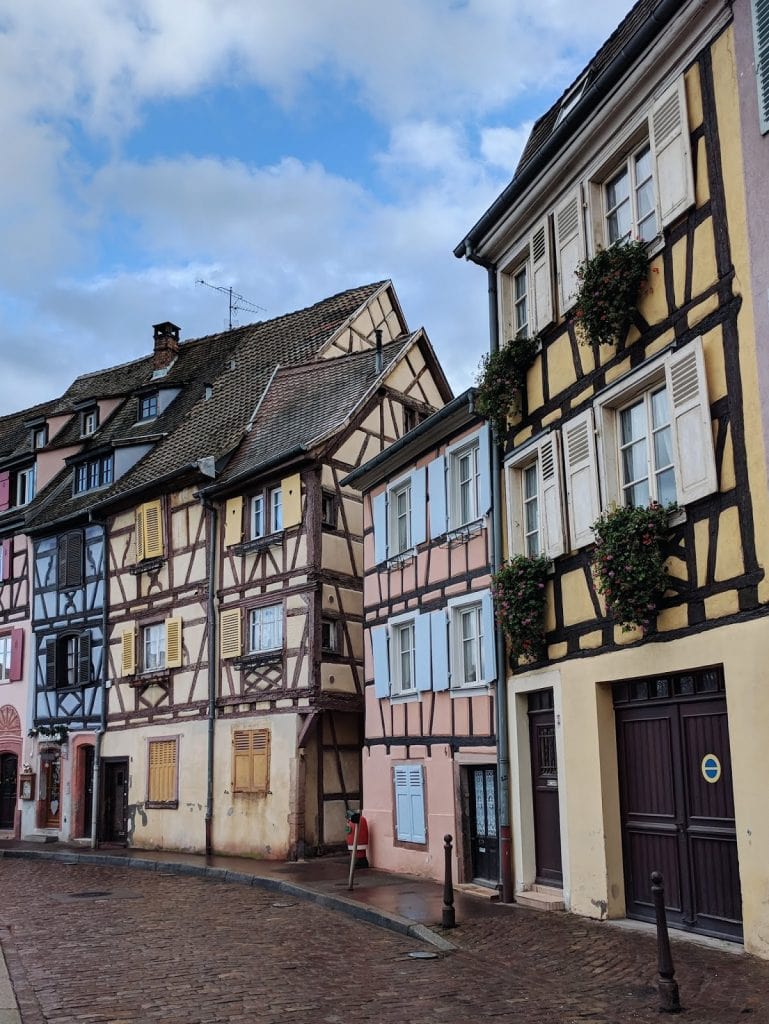 Mulhouse is not the prettiest of the cities in this list, but there are some lovely spots near the town center. Overall, it feels more industrial/modern (don’t let my old town photos fool you), so it lacks the same charm as the others. I’m sure it’s lovelier in the spring, however, with the flowering plants and wisteria.

I actually didn’t do much, other than going to the Christmas Market. There are several museums though, including the Musée Electropolis, which is all about electricity. 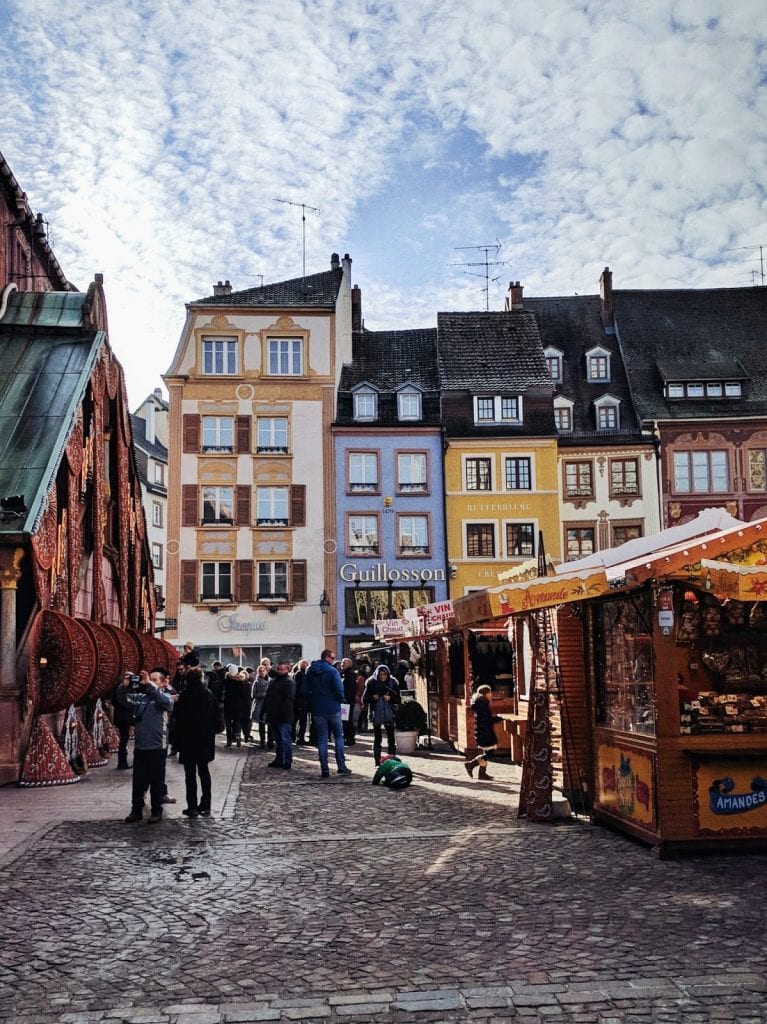 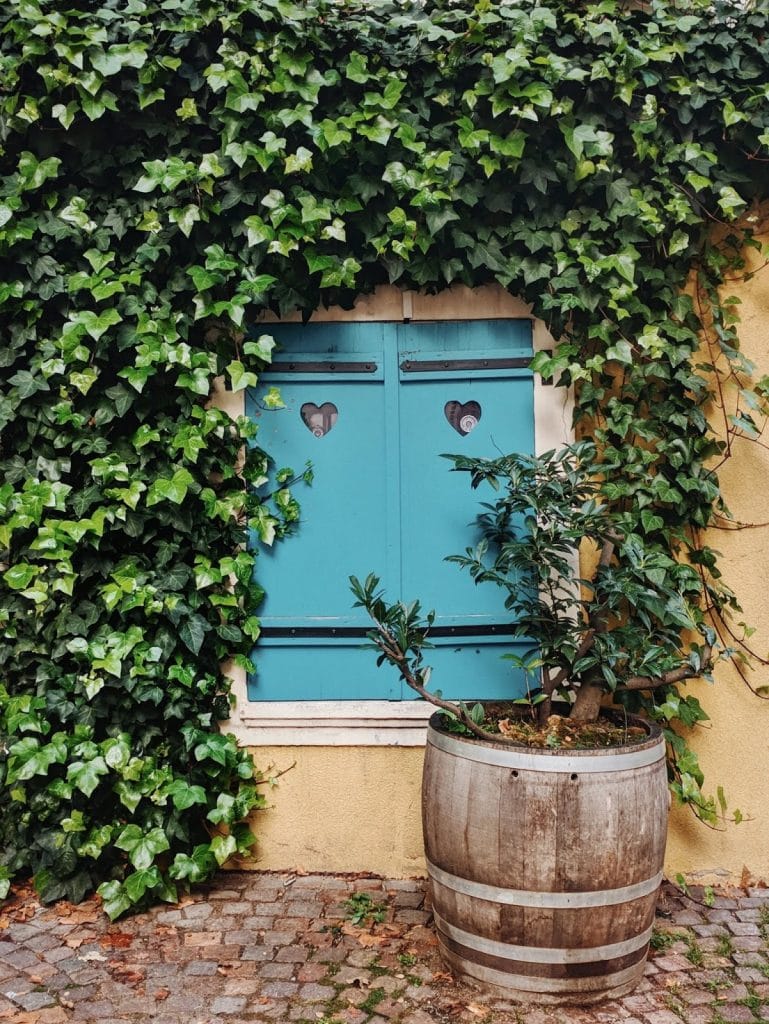 This one is a little bit of a cheat, as you can’t actually get here via direct train–there are, however, several daily drivers through Facebook rideshare groups (look up “Dijon Troyes Covoiturage”), and through BlaBlaCar. I didn’t have a great experience with BlaBlaCar, so if you’re taking it for the first time, read the pros and cons here.

I didn’t do much here either, other than walking through the old town. The half-timbered houses are beautiful, and there’s definitely a strong old town/medieval feel. For some really old buildings, check out the area near Cathédrale Saint-Pierre Saint-Paul and Eglise Saint-Nizier.

I stayed in the loveliest Airbnb right in the old town. 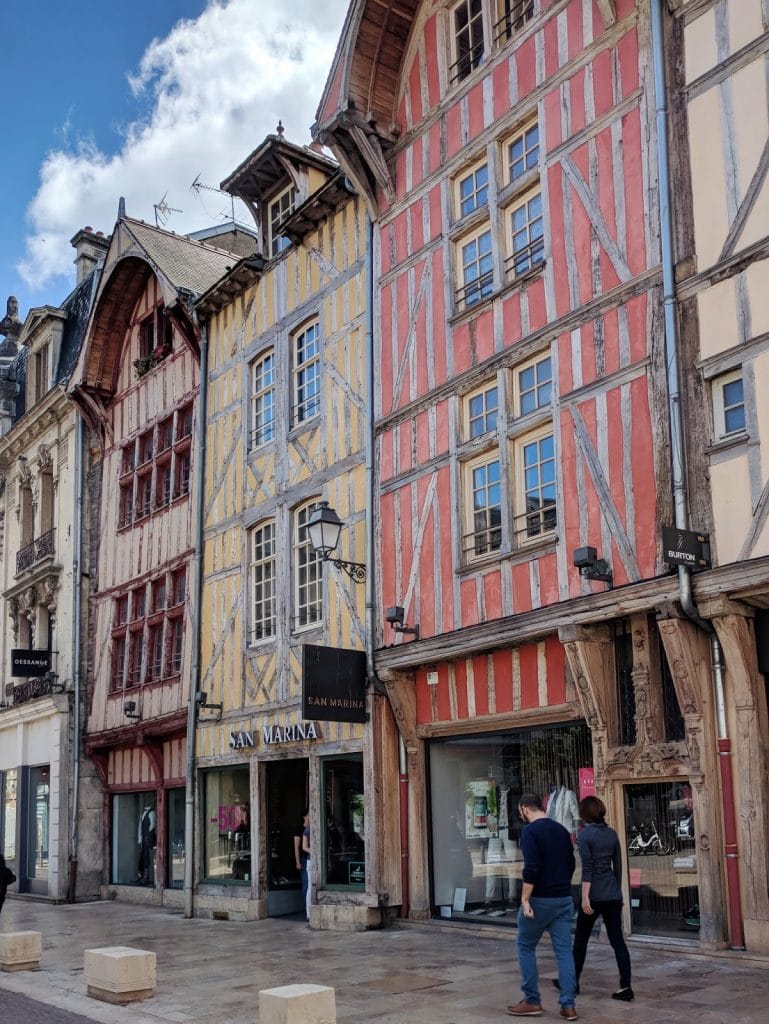 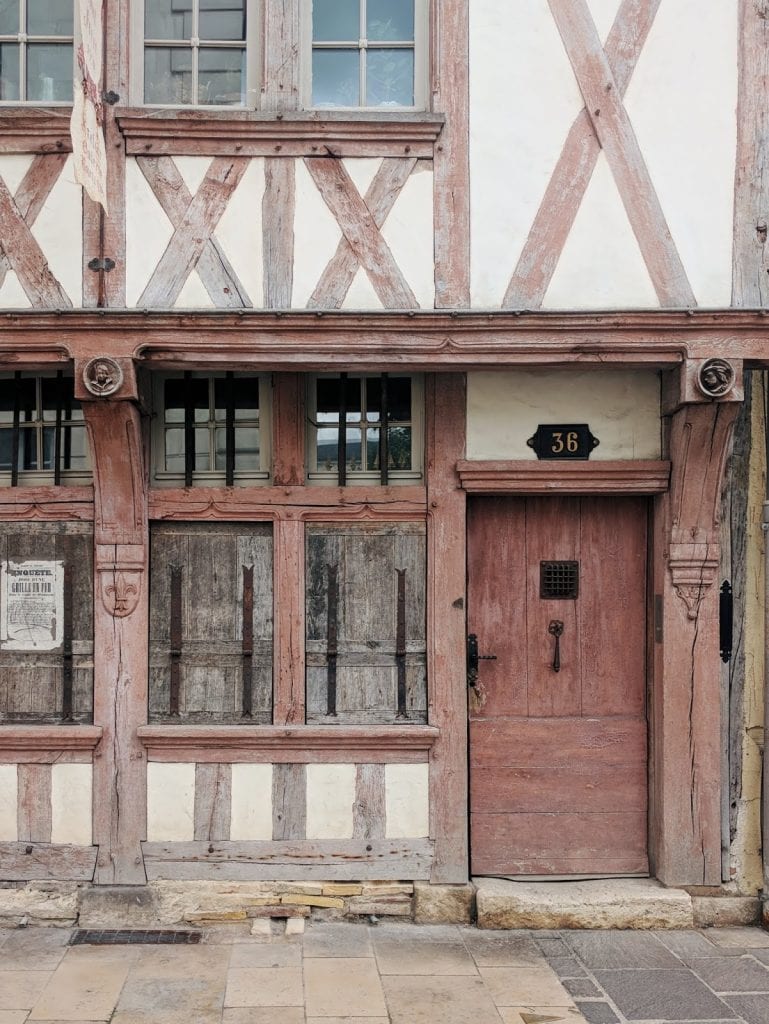 You’re probably tired of hearing about Christmas markets at this point, but Strasbourg’s Christmas Market is the most famous. I didn’t visit Strasbourg during my year in Dijon, but I did go when I studied abroad in Bordeaux in 2016.

Strasbourg also features some lovely colorful houses, like most cities in Alsace.

DAY TRIPS FROM DIJON (IN SWITZERLAND)

A quick note about traveling to Switzerland: train tickets tend to be more expensive, and less flexible (some might be nonrefundable, or only 20% refundable). I would recommend staying for at least a night to make the most of your trip.

If you do stay overnight, you should know that Swiss hostels and hotels give you a free unlimited transport card, which can save you a ton of money on transportation within the city (a single bus/tram ticket can be 4 CHF!). You won’t get these cards with Airbnb, so you might want to look at hotels/hostels instead.

Dijon is surprisingly close to Switzerland–if you want your dose of mountains, consider hopping on a train across the border (but remember your passport!). Lausanne is especially scenic since it’s surrounded by mountains, and right on Lake Geneva.

I didn’t do too much in Lausanne–I actually spent most of my time traveling in the area, to towns like Vevey and the famous Château de Chillon. Vevey was charming, but I wasn’t impressed by the Chillon Castle–I was expecting much more from the “most-visited castle in Switzerland.” The interior isn’t very engaging, as it’s pretty empty and only has dry educational panels. The exterior is very photogenic though!

I did like walking around Lausanne’s Ouchy neighborhood along the lake though, and I LOVED the Olympic Museum. It was pricey at 18 CHF, but the interactive exhibits and artifacts were educational and plain cool. There were brief clips on the history of each Olympic Games, the story of the Olympic torches (plus the actual torches), and the real equipment of Olympic medalists, like Michael Phelps’ swimsuit (from Athens 2004 I think)!

Veganopolis Café–a vegan fast food joint with yummy burgers and refreshing local kombucha. It’s kind of out of the way, but only a short walk from the lakefront. 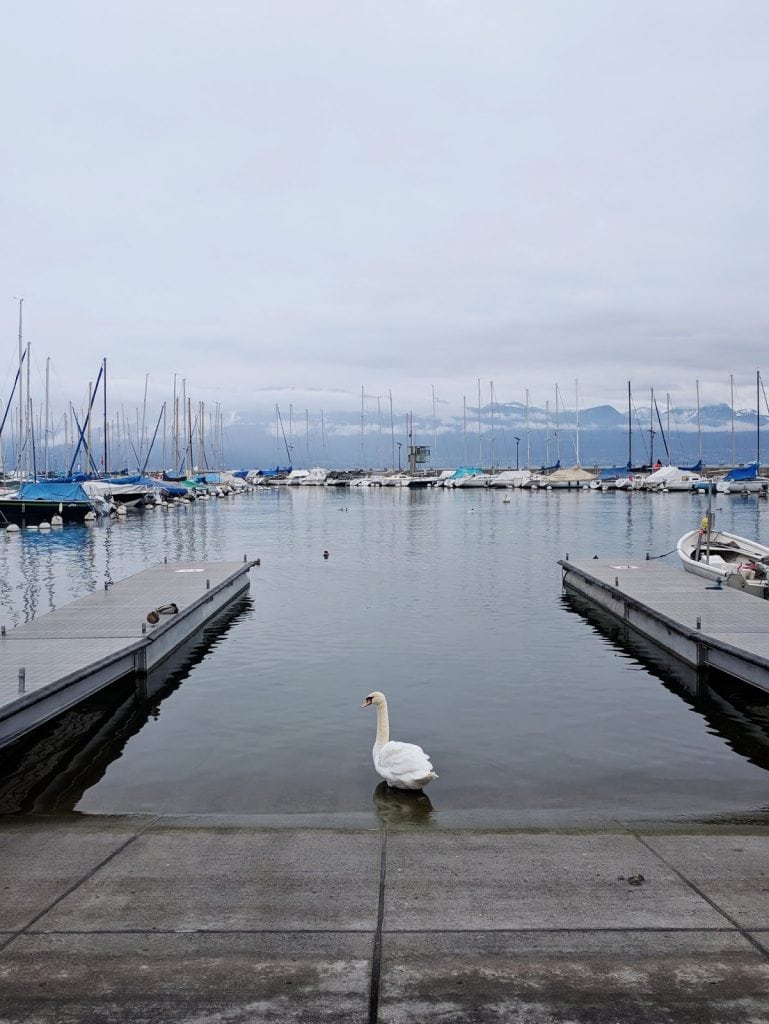 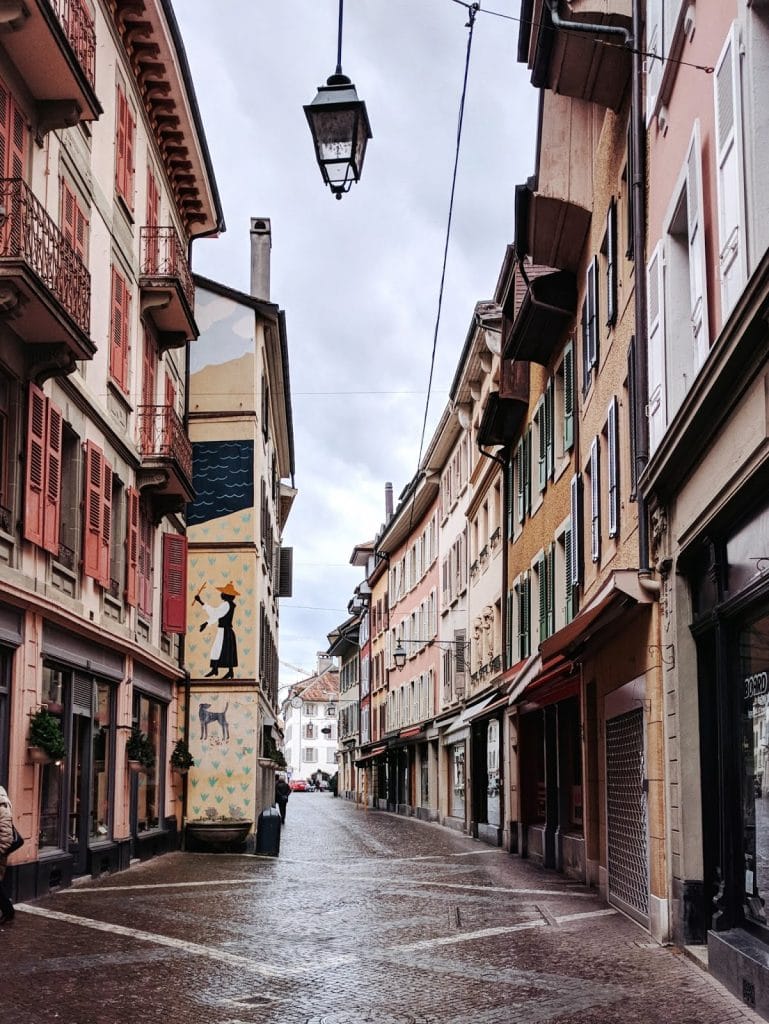 Vevey, a little town along Lake Geneva
10. Basel
Population: 171,017
Distance: 1.5 hours direct, 2 hours with one transfer in Mulhouse
Roundtrip cost: 40-80€
Pronunciation: bah-sul (Bâle in French)
Basel was one of my favorite stops. Since the main language spoken is Swiss German, it was the most foreign-feeling place I visited near Dijon. Luckily, most locals spoke English too! Beyond the language novelty, Basel felt both quaint and modern. The buildings had that old charm but remained very clean, and not in the least run-down.
What to do:

I didn’t really eat out since Switzerland is so expensive–I ended up getting small things like pretzels and sandwiches, and supplementing them with supermarket food. There’s a nice fresh pretzel shop in the main train station though, and they even have vegan pretzels 🙂

I splurged on a single room at Hyve Hostel (also goes by Generation YMCA) for around 68 CHF. The common spaces were very aesthetic and the room was pretty comfy for a hostel. The location was also great–it was only half a mile (800m) from the station. 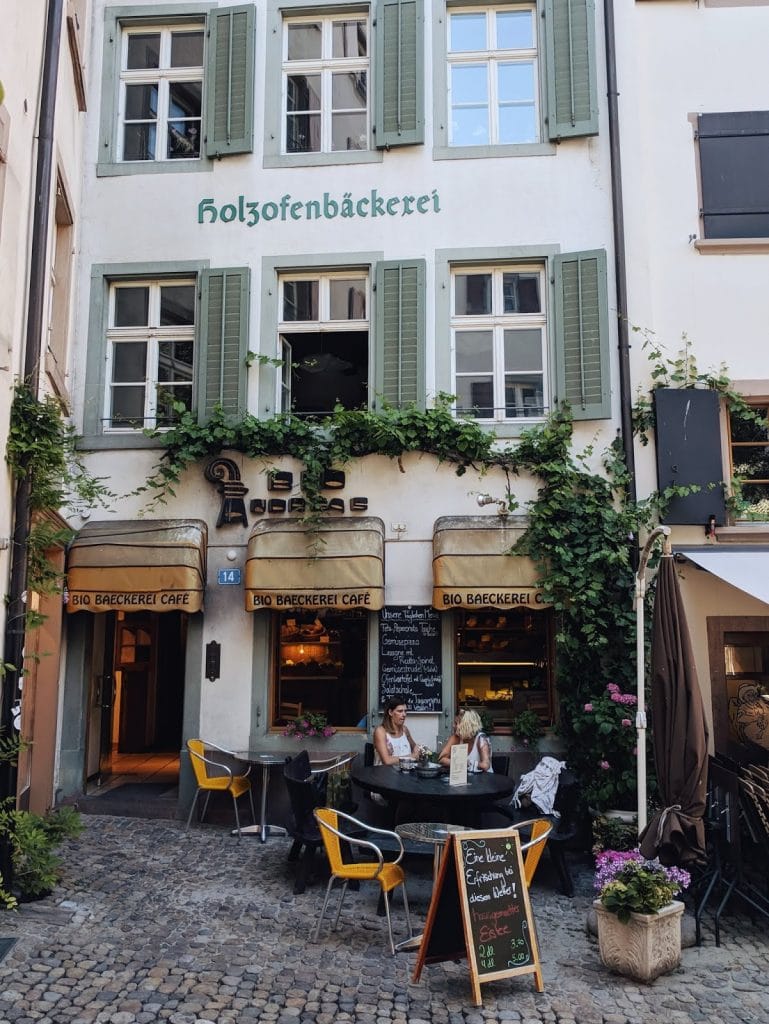 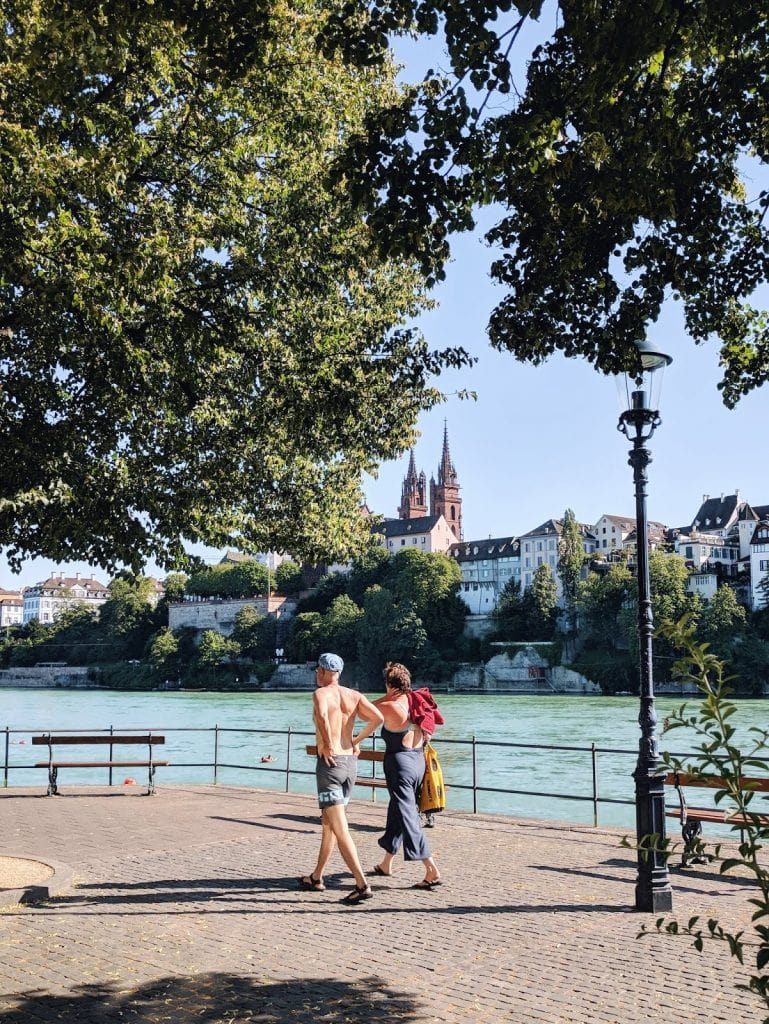 I hope this was helpful, and that you discover lots of new places and food in your travels. If there are any cities you think I should add, definitely let me know 🙂

You may also like:
Christmas in Alsace: 3 Fairytale Villages to Visit
3 Grenoble Hikes Accessible by Bus
Pros and Cons of BlaBlaCar 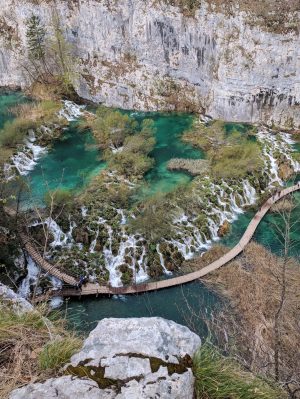 A Guide to Plitvice Lakes National Park in Croatia 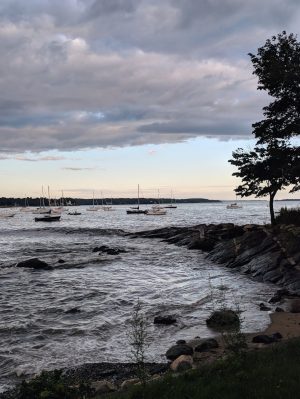 5 Non-Witchy Things to Do in Salem, Massachusetts 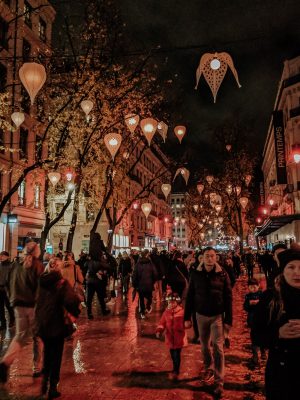