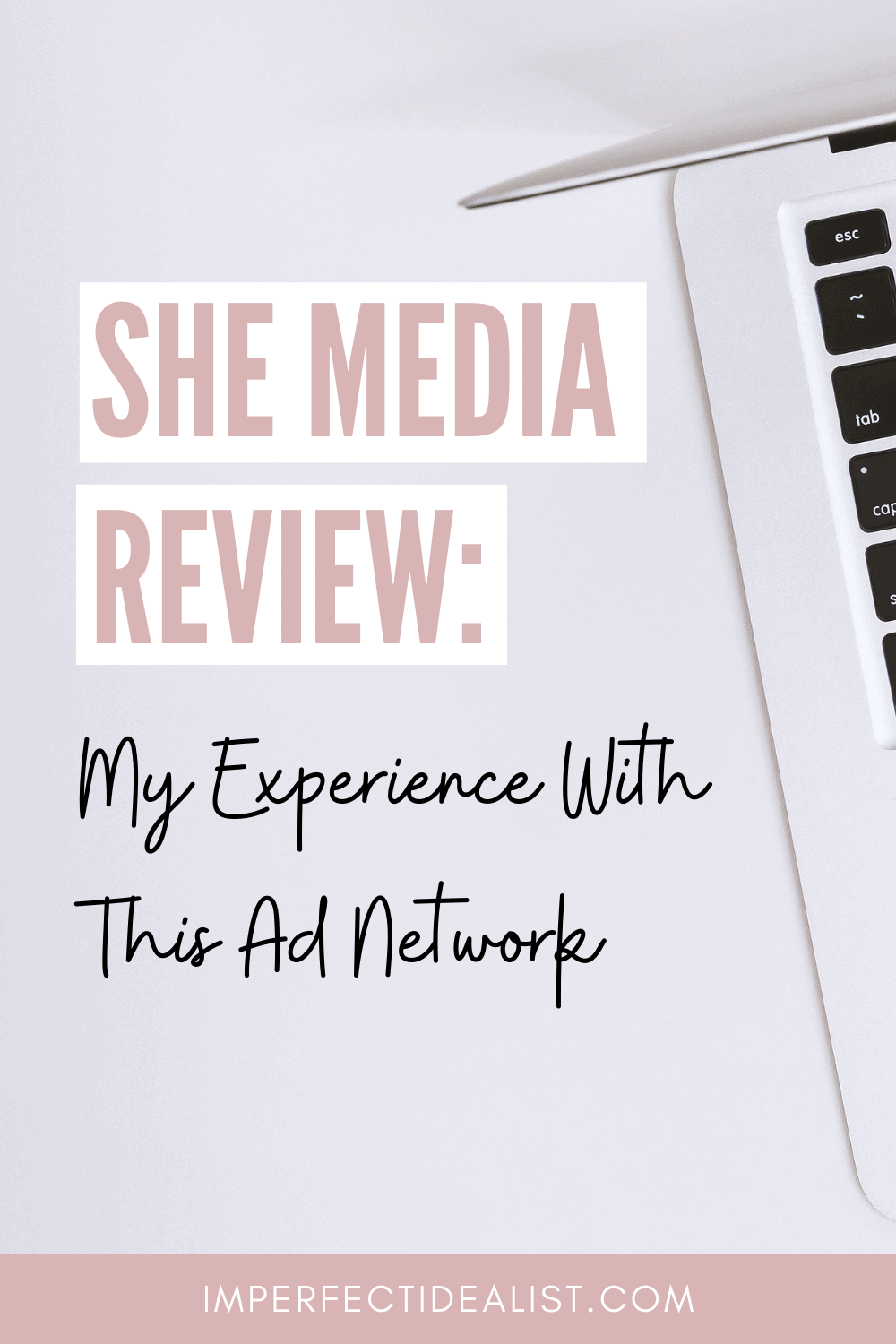 SHE Media became exponentially popular in June 2020, when Mediavine doubled its minimum traffic requirements from 25k sessions to 50k. For many bloggers, Mediavine simply slipped too far out of reach.

I was one of those bloggers—at around 18k sessions in May 2020, I felt confident that I could reach 25k in a few months. I actually hit the old Mediavine requirement only two months after the change, in August 2020 (I have the absolute best luck haha).

Reaching Mediavine no longer seemed attainable in the near future, so I had to decide: should I wait, and potentially miss out on months of passive income? Or should I join a less-reputable ad network and get locked into a yearlong contract, but at least make some ad revenue?

I decided to join SHE Media, and I’ve been with them for almost two months now. In this post, I’ll go over what my experience has been like, what the requirements are, and whether or not I’d recommend SHE Media.

For context, my blog is mainly about running, travel, and sustainability. Keep in mind that each person’s experience may be extremely different, based on factors like ad frequency and niche.

What is SHE Media? What are the Requirements?

SHE Media is an ad network, which means that they basically serve as a coordinator between advertisers and publishers (bloggers). They work with advertisers to place ads on websites with optimal audiences, and they work with bloggers to maximize revenue and serve ads they’re happy to have on their sites. In return, SHE Media takes a cut of bloggers’ ad revenue, and I’m sure they charge advertisers as well.

Like other ad networks, SHE Media has eligibility requirements. They include:

This is more or less directly quoted from SHE Media’s FAQs page.

All this said, SHE Media has been quite flexible with requirements, though they may have become stricter given the increased volume of applications. I know of a few bloggers who were accepted with under 5k monthly pageviews. I myself didn’t meet all the requirements—my audience is only around 50% US-based, and 60% female. If you don’t meet all the requirements, you can certainly give it a shot anyways, though keep in mind that you can only reapply 6 months later, if you’re rejected.

SHE Media states that it should only take them a week to review your application, but it’s been taking much longer in reality (probably due to the volume of applications). It took me around 3 weeks to hear back, and it’s taken others a few weeks as well.

SHE Media vs. Ezoic vs. Monumetric vs. Google AdSense 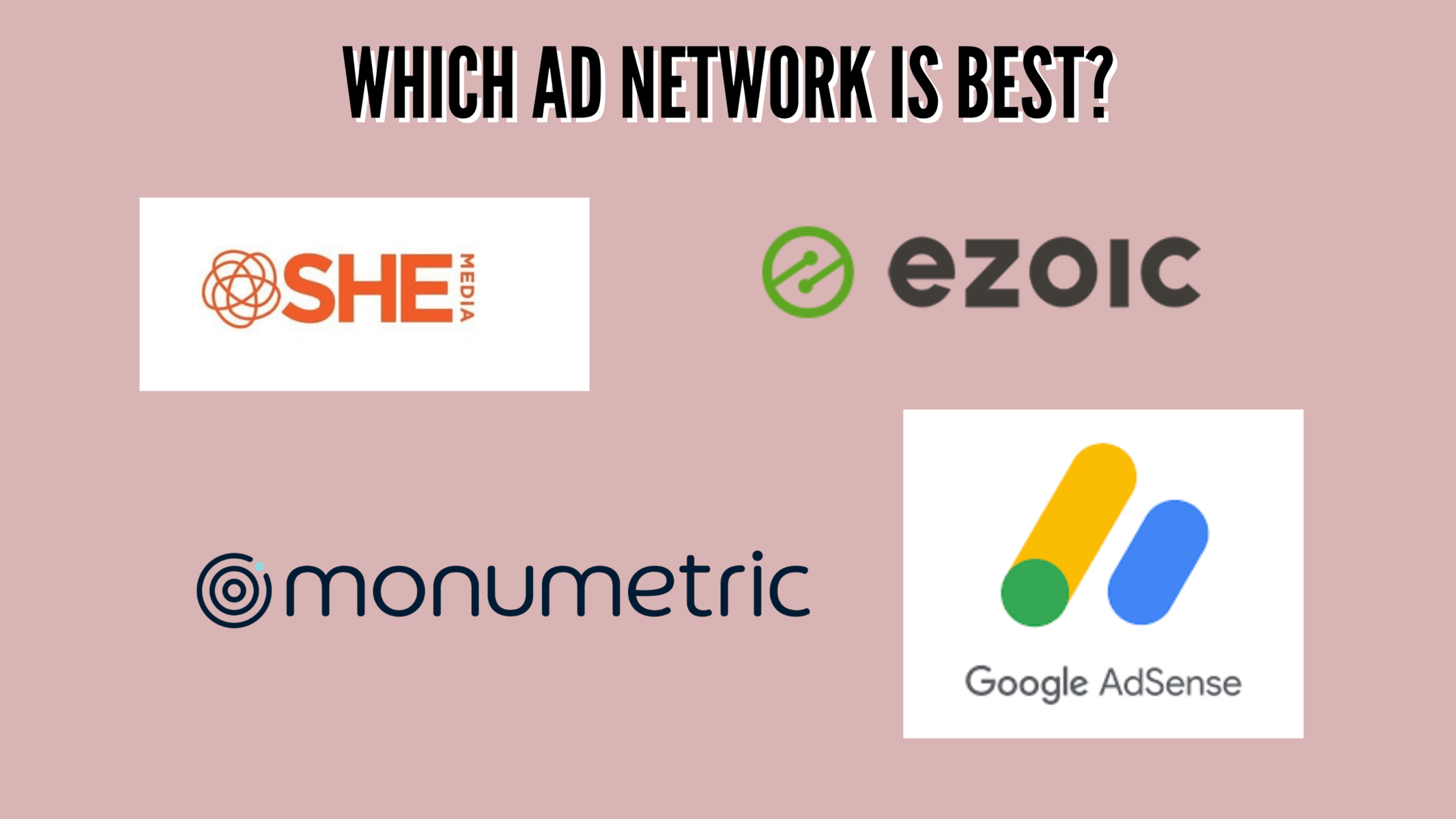 How does SHE Media differ from its competitors? Ezoic, Monumetric, and AdSense are popular alternatives for bloggers who haven’t yet reached Mediavine numbers. In general, SHE Media is much better than these other options. Here’s why:

Ezoic: said to slow down your site a TON, and RPMs (revenue per “mille,” or 1000 impressions) are generally not great. Some people, however, have had decent RPMs of around $10. That said, they only require 10k pageviews.

Monumetric: there’s a $100 setup fee, and wait time for approval has taken months for some bloggers. They also only require 10k pageviews, but I haven’t heard much about RPMs.

Keep in mind that I’ve never been with these other networks, so this is based on my observations from blogging Facebook groups, and conversations with other bloggers. I also certainly don’t think SHE Media is all rainbows and unicorns (I have quite a few gripes), but it’s generally better than the other options.

My Experience with SHE Media 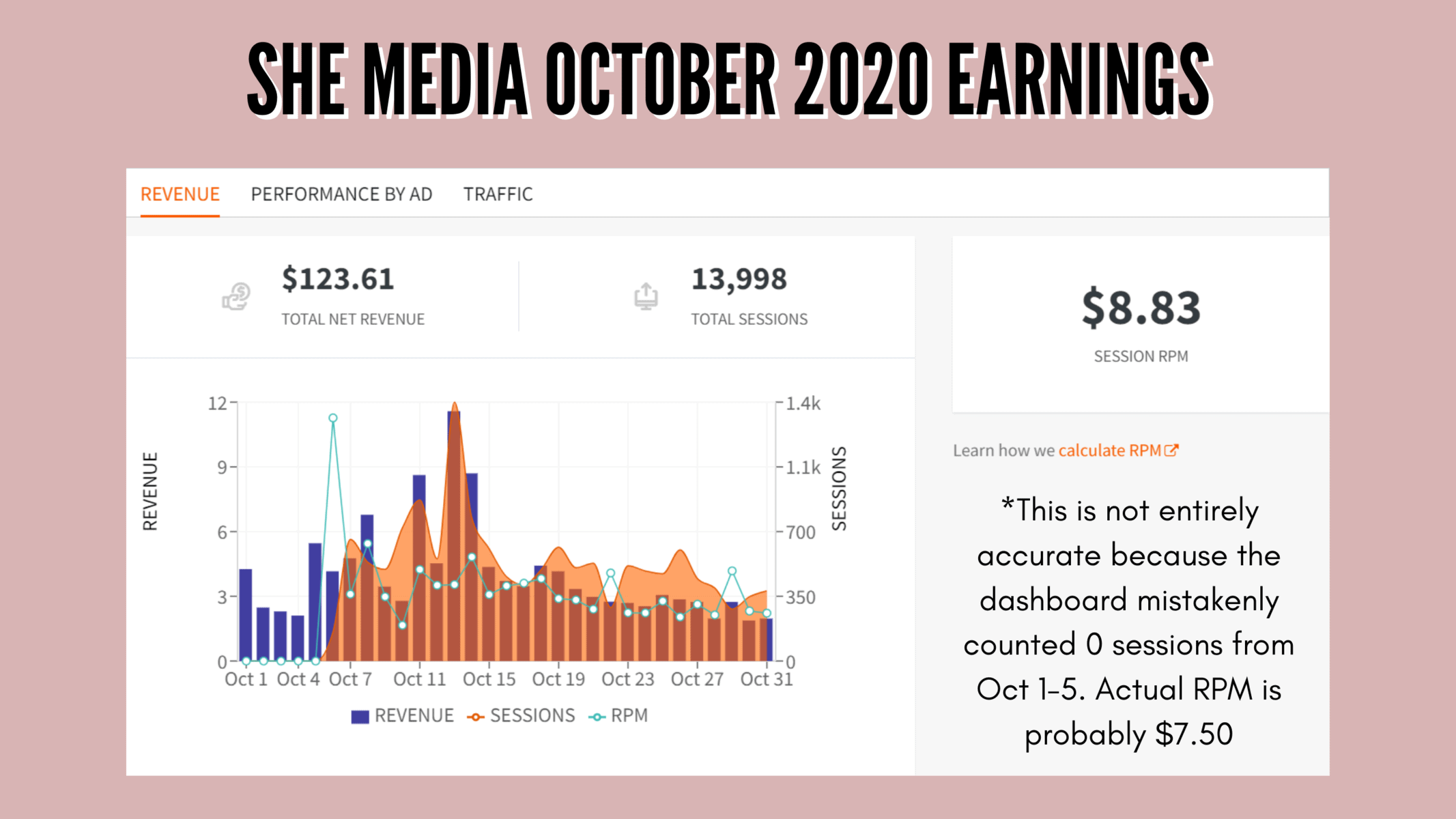 My RPMs have been all right with SHE Media—they’re certainly better than they would be with AdSense, but they’re nothing like the $20-30 I’ve seen in Mediavine income reports. With Mediavine, I’ve seen blogs with 25k sessions making $300-400 monthly through ads. I made $124 in October 2020 with 25.5k sessions, and had an RPM of $8.83 (this is not entirely accurate either, as the SHE Media dashboard reported 0 sessions from October 1-5, which is not possible, as I still made revenue those days. I’d say my actual RPM was probably around $7.50).

Keep in mind that only 14k of those sessions were “counted,” and that RPM is calculated using the 14k sessions, not 25.5k. This is because only 55-65% of the people visiting my blog saw my ads, as some people have ad blockers, and those in Canada and the EU can opt out of seeing ads.

My ad revenue is also likely impacted by my settings. I don’t have nearly as many ads as most bloggers—I chose to place my in-content ads every 700 words, so most posts only have 2-3 ads. I also don’t have video overlays, and have opted out of all “controversial” ads, like political, dating, alcohol, diet, tobacco, and others.

If I were to increase ad frequency and opt into those categories, I’d probably see a much higher RPM. I’m just unwilling to do that haha. SHE Media reps have said that typical RPMs are $20-30, but I’ve spoken with another blogger with SHE Media who has frequent ads, and an RPM of around $10. Another blogger with around 30k pageviews also said they were making only a few dollars per day. Yet another (a food/drinks blogger) said their RPM was around $5. It’s unclear what exactly you can expect.

EDIT (December 2020): Since October, I’ve had higher RPMs, but they’re likely due to Black Friday. 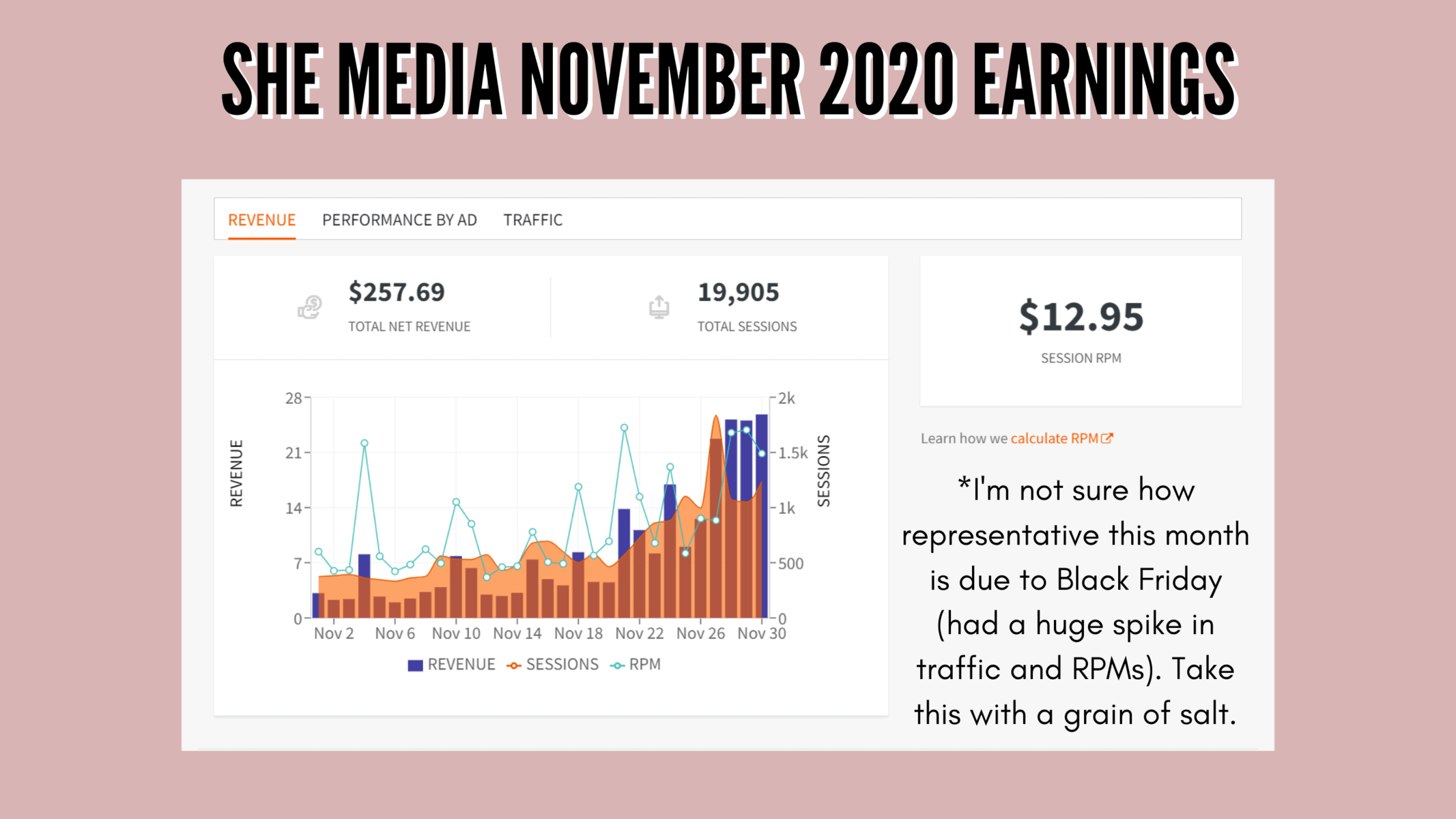 In November, I had an RPM of $13, but this was heavily skewed by the last few days of the month, where I had RPMs higher than $20. I will continue to update this post with any changes. In the meantime, take this month with a grain of salt. I am experiencing higher RPMs in December as well, but I also attribute this to the holiday season.

Edit (July 2021): After the holiday season, I averaged ~$13-16 for my RPMs through June, but shortly after I told SHE Media I wouldn’t be renewing my contract, I dropped down to $8 (not sure if this is related). I will not be renewing with them because I’ve gotten really close to Mediavine, and I’m especially not inclined to renew if my RPM is going to stay at $8.

Site Speed with SHE Media 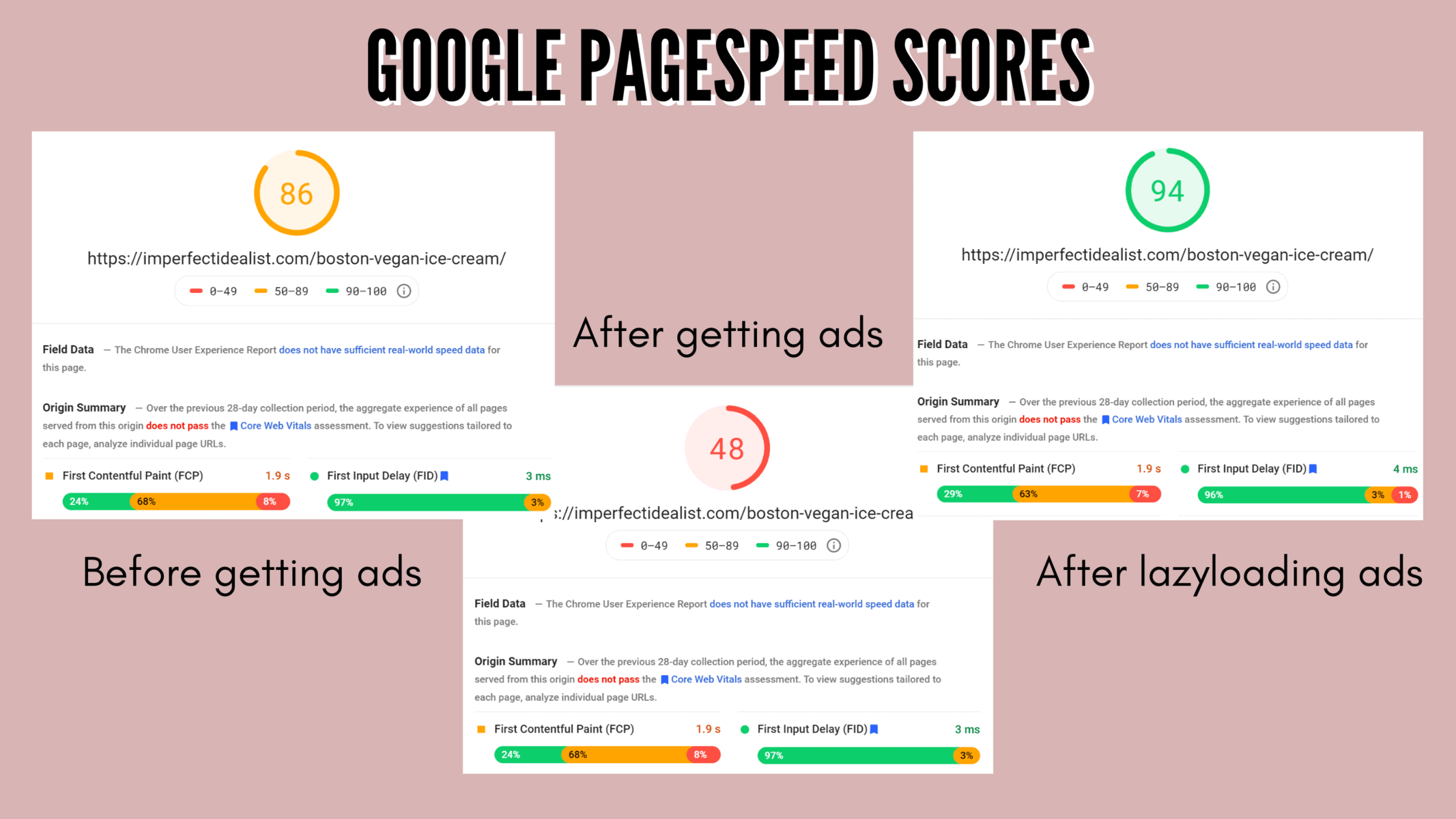 My site speed totally tanked when I initially installed ads—I went from around 70-90 PageSpeed scores on desktop and 50-60 mobile scores to 40-50 on desktop and 10-15 on mobile.

Luckily, my brother is a programming whiz, and he helped me lazyload the ads. Somehow, my PageSpeed scores are now better than what they were before I had ads. I’m getting 90-100 on desktop, and 60-70 on mobile.

SHE Media is also able to help with site speed issues, but I installed ads on a Friday, and there’s no support over the weekend (and I’m highly impatient). But basically, I wouldn’t worry too much about site speed issues from SHE Media. 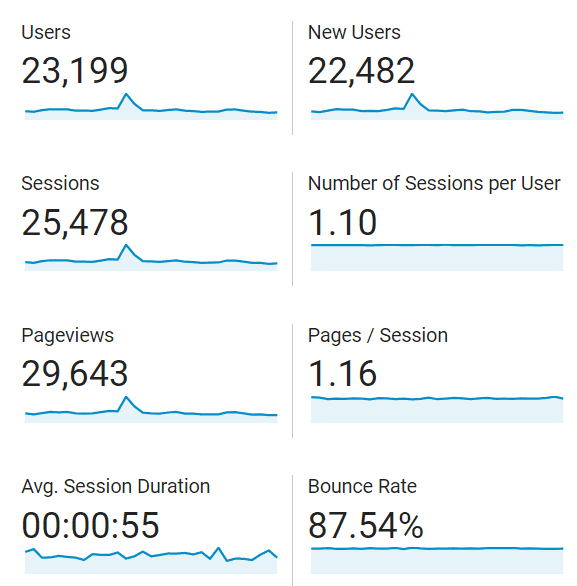 I was concerned that getting ads would lead to a drastic increase in bounce rate (the percentage of people who leave your site after viewing only one page). Luckily, mine only increased about 2% from 85% to 87%. My bounce rate has always been high, as I have a bunch of SEO-optimized guides, and people usually just leave after finding the answer to their question.

In fact, you’re probably going to leave after just reading this, and that’s totally cool. But if you want to stick around and learn how I grew my niche-less blog or check out my travel, running, and sustainability content, I’d be super happy!

Pros and Cons of SHE Media

Here are some other things you should know about SHE Media. 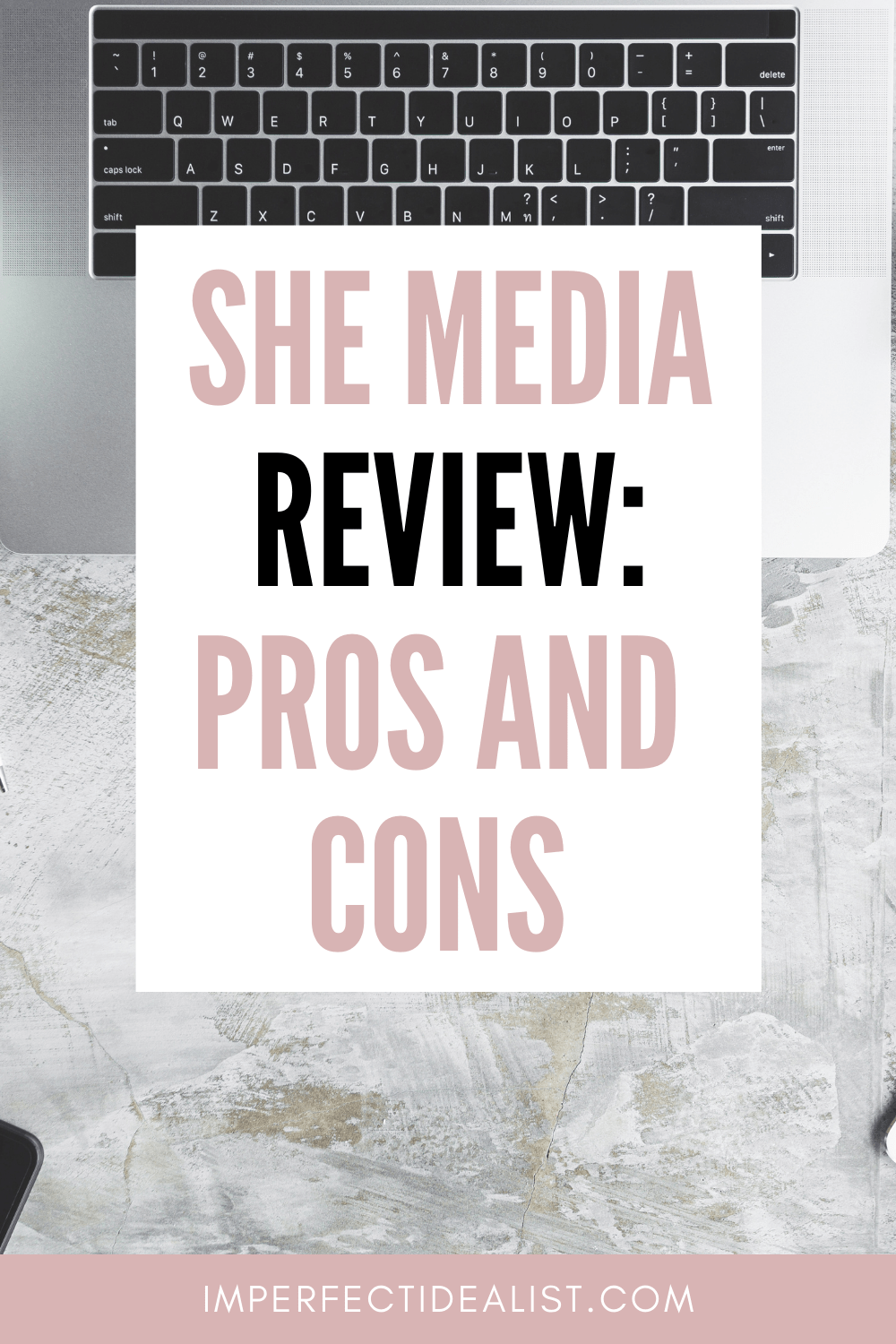 This list is going to seem long, but that’s because I want this to be as transparent as possible! Don’t take it to mean that I hate SHE Media or anything.

Should You Join SHE Media?

SHE Media has really been a mixed bag for me. I’m glad to be making some passive income, but it’s definitely not that exciting to only make a few bucks a day when others are making $10-20 with the same traffic. Again, this could be my unwillingness to plaster my site in ads, but based on conversations with other bloggers, SHE Media is not as profitable as Mediavine.

That said, it is better than its non-Mediavine alternatives. I just wish that I had more control over my ads, such as being able to block the intrusive ones myself, or adjusting ad frequency. The only things I can really do on my end are disabling ads on specific posts, and opting in or out of specific ad categories and placement.

If you have under 20k pageviews, I don’t think implementing ads is worth it. In fact, I think it’s a common beginning blogger mistake to implement ads too early on. With around 30k pageviews, I only made $124, as only 55-65% of readers even see my ads. Most days, I only make $3-4. If you have fewer pageviews, you won’t be making much money at all, and it’ll come at the expense of reader experience (let’s face it: ads are ugly).

I personally sometimes wish I’d waited to reach Mediavine’s new requirements, but there’s no telling when that will happen, or how. It’s also hard to say no to passive income, even if it is a smaller amount. Ads are the one way to monetize pageviews; otherwise, you may earn nothing at all for many site visitors, unless a few select ones buy something through an affiliate link.

As a blogger in the sustainability field, I’ve also felt morally conflicted about ads. I certainly don’t want to encourage consumerism, and I also can’t control whether unsustainable products are advertised on my site (like BP gas or fast fashion). I don’t love this at all.

But to realistically continue my blogging work, I do need to be paid for all the hours I spend researching, writing, and creating. Sponsorships and affiliate links aren’t great either, as they also involve consumerism and advertising. This is just the catch-22 of sustainable blogging, and it’s a delicate balance to maintain.

In the future, I may consider selling ad sidebar space to specific sustainable companies. I’ve seen some bloggers who aren’t with ad networks, but instead have static sidebar ads that they negotiate with companies they support—that would be a cool way to get ad revenue and know exactly who I’m promoting. It’s just more work and more contracts, and not as passive as simply letting an ad network figure it out for you. Many sidebar ads also are all the way at the bottom of the screen on mobile. It’s not a perfect solution (and it’s still an ad that promotes consumerism), but it is an interesting alternative.

All in all, my experience with SHE Media is just fine, and it’s a decent option if you’re hoping to monetize with ads. Just be aware of the limitations, such as slow support and intrusive ads you can’t remove yourself. If you have under 20k pageviews, I’m not sure it’s worth it. If you’re nearing Mediavine numbers, I’d consider waiting to join a more developed network.

Let me know if you have any questions, and sending good vibes for your blogging journey!

10 Common Blogging Mistakes to Avoid
Stolen Blog Content? How to Deal with Plagiarizers
10 Things I Love and Hate About Blogging 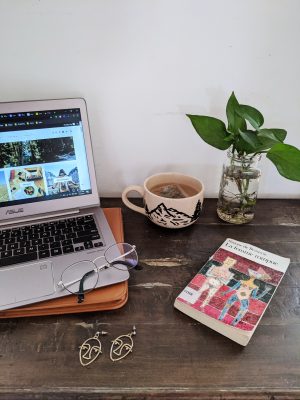 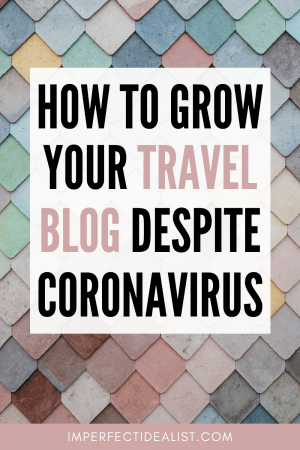 What Should Travel Bloggers Do When People Aren’t Traveling? 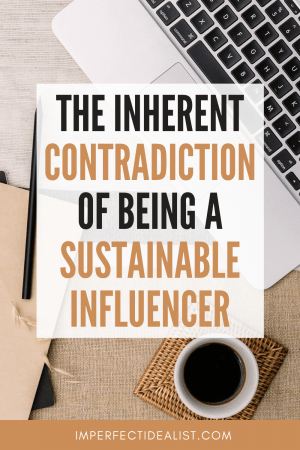 The Inherent Contradiction of Being a Sustainable Influencer