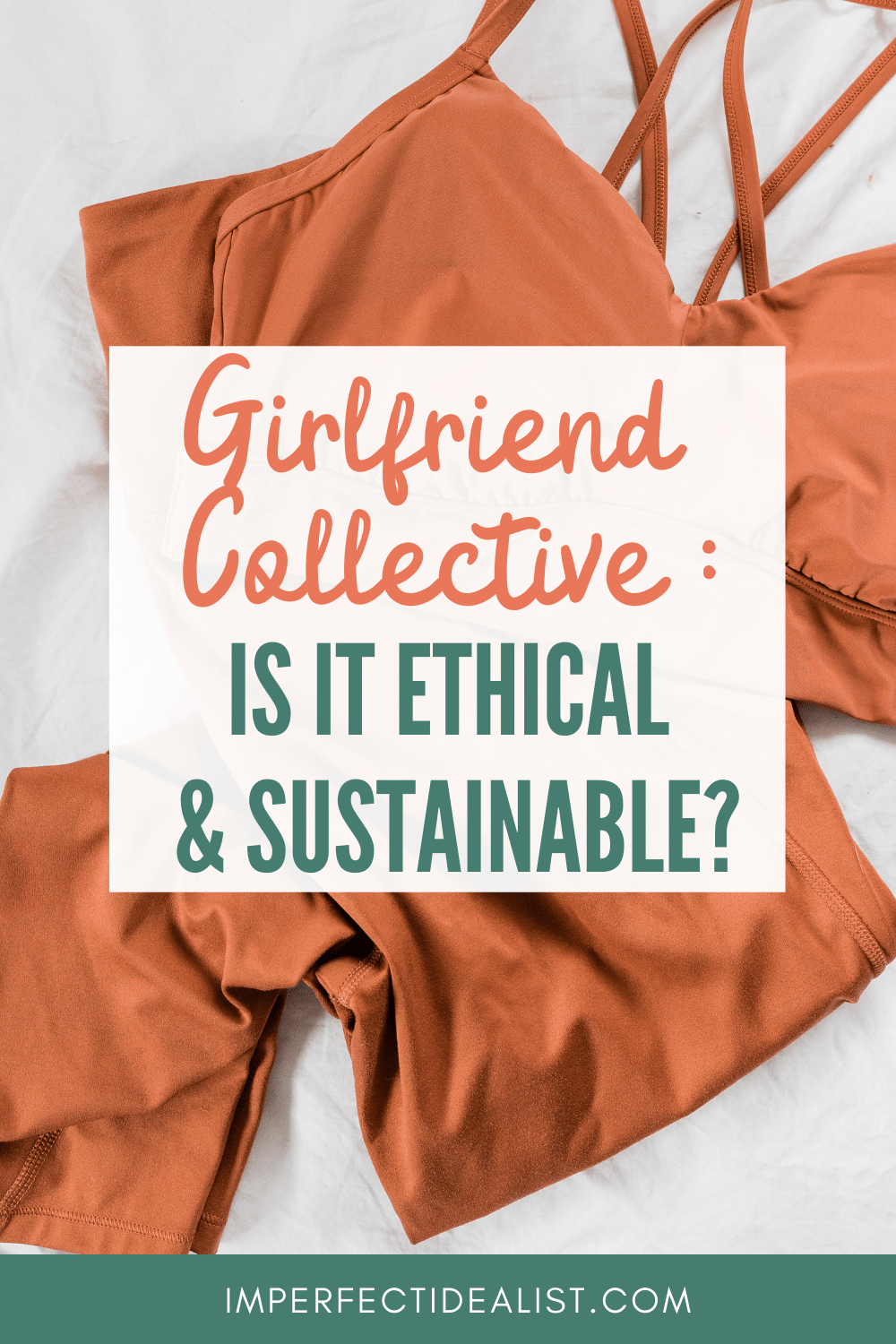 Girlfriend Collective is a colorful activewear brand with versatile silhouettes. Over the past few years, they’ve gained an enthusiastic following and are commonly recommended by sustainability advocates.

In this post, I’ll go over their (pretty good) sustainable and ethical measures, and point out some areas of improvement.

This information is mainly from Girlfriend’s About page, so this info is subject to change or be updated.

The image used in the post is not of Girlfriend pieces since I don’t own any of their items. It’s just a generic picture of activewear, though the color is pretty similar to what Girlfriend would make.

Girlfriend’s products are made mainly from recycled water bottles, or rPET. rPET is a bit of a controversial fabric because, like other synthetics, it sheds microplastics. Unfortunately, there aren’t a lot of great alternatives to synthetic activewear yet, so rPET is one of the better options. Girlfriend does provide literacy around microplastic pollution and sells a washing machine filter and washing bag to capture microplastics.

Their rPET factory in Taiwan is also certified by the government, ensuring that the plastic bottles are actually post-consumer. There are cases where factories will “recycle” new plastic bottles since it’s easier than collecting used ones.

The rest of Girlfriend’s fabrics are recycled or natural, including ECONYL (recycled nylon), cupro (made from cotton waste), recycled cotton, and organic cotton. The recycled fabrics are also certified Standard 100 by Oeko-Tex, meaning they’re free of harmful chemicals. All wastewater is treated before being released, and the dye mud is made into sidewalk stones.

One area of concern is Girlfriend’s number of limited drops. While making small quantities of products is better than overproducing, these limited drops often feel like scarcity marketing (“get it now, because it will never be back!”). The drops aren’t always transparent either, leading people to log in at specific times just to find out what the new products are. Overconsumption isn’t as prevalent with a pricier brand like Girlfriend, but the company does have a cult following and I’ve seen some massive collections shared in the unofficial Girlfriend Facebook group (like 14 of the same sports bra in different colors). A better alternative might be pre-ordering within a window of a few weeks.

Girlfriend has responded to the criticism of their drops and promotions, stating that they remain committed to their core goals of sustainability as they grow, and that reaching a larger scale will allow them to give back more to important causes. I would like to see more conscious companies become more mainstream, but I hope Girlfriend can rethink some of their advertising. It is a consumer’s responsibility to practice conscious consumption, but a sustainable company should encourage mindfulness as well (especially with activewear, which typically lasts years and years).

Edit: a few days after publishing, Girlfriend actually released a statement before their next limited drop. They said that they don’t want to encourage consumption, so they’re going to preview each drop the day before to give people time to think about their purchases. I don’t think one day is really enough, but I’m glad to see them listening to their customers and making improvements. They also encouraged people to not participate in the drop if they already had what they needed. 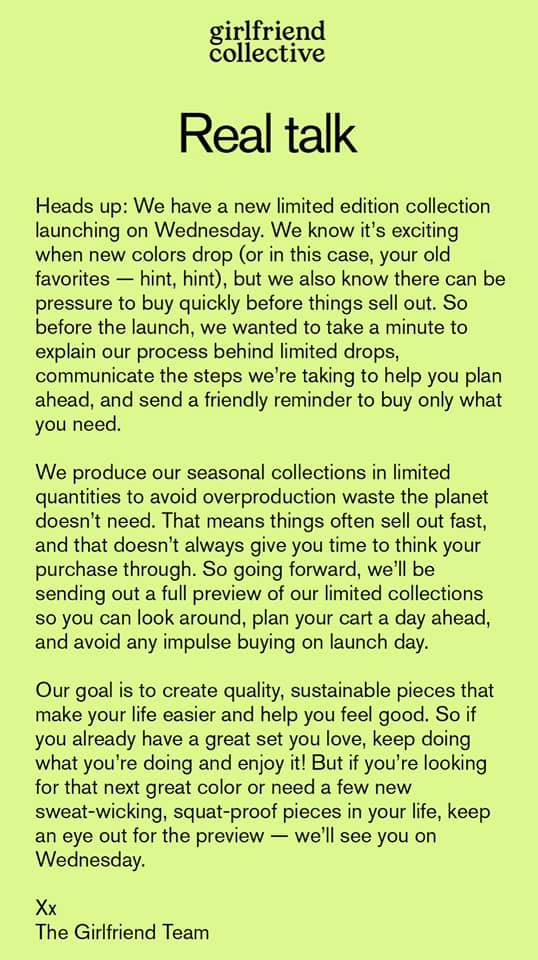 While the final stage of production seems pretty ethical, what about the rest of their supply chain? I’d like to know more about the “zero-waste, zero-emission” Japanese factory that produces their cupro, the Taiwanese factory that creates their rPET, the factory that makes ECONYL, and the distribution center. I’m sure there are other manufacturers as well.

Girlfriend Collective has been vocal about social justice issues like the Black Lives Matter and Stop Asian Hate movements, posting educational graphics on their Instagram page.

In 2020, they donated 20k+ to grassroots organizations and the ACLU. 100% of the net profits from their socks & underwear launch were donated to The Loveland Foundation, The Okra Project, NAACP Legal & Defense Fund ($60k total). They asked BIPOC activists to model for the launch, and each of them received a $10k grant to continue their work. I hope to see them continue to invest in creators who are making a difference.

All Girlfriend Compressive pieces are recyclable into new Girlfriend pieces (also the R&R collection, FLOAT pieces, and 5 pairs of socks or underwear). This is pretty sweet, as most recycling programs downcycle into insulation rather than new clothing.

I’d like to see more details about the recycling program, however, as recycled fibers often become weaker and often have to be mixed with virgin fibers. I’m not positive that the Girlfriend pieces can be recycled indefinitely, especially the rPET ones.

Girlfriend is known for being one of the more size-inclusive brands, with sizes ranging from XXS-6XL. There have been complaints, however, that some of the larger sizes aren’t always consistent and often run small. Be sure to take a look at the reviews before purchasing.

This is certainly an area of improvement, as inconsistent plus sizing can make a brand look more inclusive than it actually is, and it can also lead to more emissions and waste from returns (according to the unofficial Girlfriend group, Girlfriend recycles its returns rather than reselling them).

One interesting development was that they recently released a men’s collection, which upset a lot of people since they also stated that “Gender is a construct. Wear whatever you want.” It’s totally cool to have more masculine styles, but the messaging is confusing there. It might’ve been more inclusive to put the pieces in their “for everyone” line or to label the collection as just being more masculine styles.

Girlfriend’s pieces do not include any animal products, but it’s not stated anywhere on its website that it’s vegan. PETA suggests them as a vegan activewear brand, however.

Girlfriend’s website features diverse models of many ethnicities and sizes. They are also one of the few sustainable brands to release their corporate diversity statistics (they’re actually an Asian-owned business). They aim to build a diverse company where no single culture or identity is dominant. I hope they’re also backing their diversity goals up with fair salaries across the board.

Girlfriend has a lot of good things going for it, and I personally would recommend them as a sustainable brand. They can definitely improve their supply chain transparency and use more conscious marketing, however. I’d also love to eventually see a natural alternative to synthetic activewear, though this requires long-term innovation.

If you’re planning to shop from Girlfriend, I encourage you to buy only what you need and use a microplastic filter if possible. If this post helped you, it would mean a lot if you used my affiliate link, if you were planning to buy anyways. Through this link, I’ll earn a small commission at no extra cost to you, which helps me continue my educational content.

You can also find used or new Girlfriend products on eBay (affiliate link) and Poshmark (get $10 off your first purchase with my referral link).

Want to evaluate other brands? See my criteria on how to tell if a brand is sustainable and check out my other “sustainable or not?” posts. If you’d like to see a brand evaluated, feel free to suggest one in the comments! 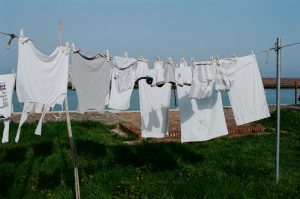 How to Make Your Clothes Last Years: Sustainable Care Tips 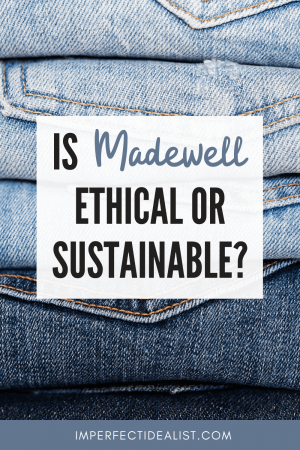 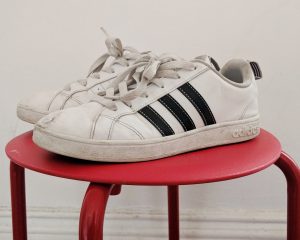 11 Ways to Get Rid of Old Clothes Responsibly