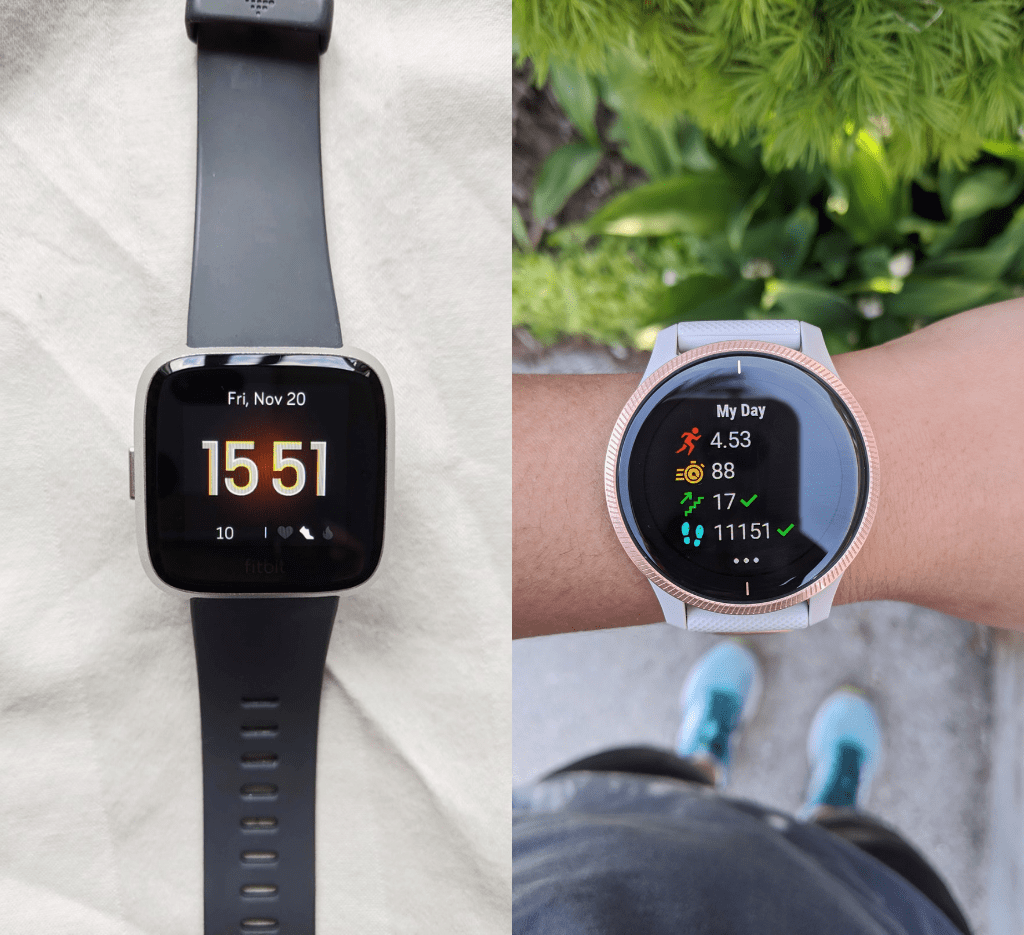 I’m part of a ton of running Facebook groups, and one of the common questions I see asked is “garmin or fitbit”? (Along with “garmin or apple watch?” but that’s a post for next time).

As a marathoner and GPS watch nerd, I’ll be offering my perspective in this post. I’ve tested 11 of the most popular GPS watches over the last few years, and have also toyed with my mom’s Fitbit and researched lots of specs for this post. For full disclosure, I have owned a Garmin, but I haven’t owned a Fitbit, and I currently use a COROS APEX.

Also, please note that this post contains affiliate links, meaning that I may earn a small commission on any purchases at no extra cost to you. This income allows me to keep writing reviews and comparisons, and it means a lot if you use my links!

What Garmin and Fitbit Can Both Do

Keep in mind that not every Fitbit has built-in GPS; for this post, I’m only referring to the 3 models that aren’t discontinued that have GPS, which include the Fitbit Charge 4, Sense, and Versa 3. This is because a device without GPS wouldn’t make sense for a runner (all Garmins have GPS since they’re built for runners).

Similarly, I’m referring to the current generation Garmin models in a similar price range for these Fitbits (up to $350), including the Forerunner 45, 55, and 245, plus the Garmin Vivoactive and Venu. Keep in mind that there are more expensive Garmins that can do even more, and there are also cheaper/older Garmins that can do similar things. Check out my post on best GPS watches under $200 for my top budget recs.

Each Garmin and Fitbit model has different features, but here are some of the specs that the two ecosystems have in common. Garmin was built for runners, so I’d recommend it over Fitbit for nearly all runners. Here are some of the helpful running features they offer.

Battery life: Fitbits last up to 6-7 days with regular use and 5-12 hours in GPS mode. Garmins also usually last a week with regular use, but they last up to 13-24 hours in GPS mode, with the newer and higher-end models in the 20-hour range. There are more expensive Garmins that last even longer! This can make a big difference for frequent runners, as you may have to charge your Fitbit every few days (keep in mind that battery life is “up to” and not “at least,” so if you’re using both the GPS and everyday functions, your Fitbit may die quickly).

Safety features: Garmin has LiveTrack, which allows your friends and family to follow your activity in real time. They also have Incident Detection, which alerts your emergency contacts with your location if your watch detects an incident (you must be connected to your phone, though).

Button operation: The Fitbits mentioned in this post are touchscreen, which Garmin has a mix of touchscreen and button-only watches. This is more of a preference thing, as some people like the touchscreen, but others may want buttons only if they’re running in cold climates or the rain, or swimming frequently.

PacePro: The Forerunner 55 and 245 (plus higher-end models) have PacePro, which helps you create a pacing strategy based on the course and lets you know if you’re on track for your goal time.

Performance metrics: The Forerunner 245 (and higher) have Training Status, Training Load, and Training Effect, which lets you know whether your workout load is optimized and how it’s impacting your fitness levels.

Amazon Music: Fitbits aren’t yet compatible with Amazon Music, while Garmin is, if the watch has a music function. This includes the Vivoactive 3/4, Venu, Forerunner 245 music, Forerunner 645 music, and more expensive models.

Longevity: Fitbits have a reputation for dying within a year or so. Some can certainly last longer, but it’s not uncommon for people to have to replace theirs frequently (especially the Fitbit Charge). Garmins, on the other hand, tend to last at least a couple years. I owned the Vivoactive 3 Music for around 2.5 years before it died, and I’ve seen others own their Forerunners for literally decades (the older Forerunners like the 235 and before seem to be the most indestructible).

Open water swimming: Fitbit doesn’t track open water swimming at all, and neither does Garmin at this price point (under $350), but the fancier Garmins like the 745 and 945 do offer this. Triathletes will want to stick with Garmin or COROS (my personal favorite for multisport and out-of-this-world battery life—I own the COROS APEX). 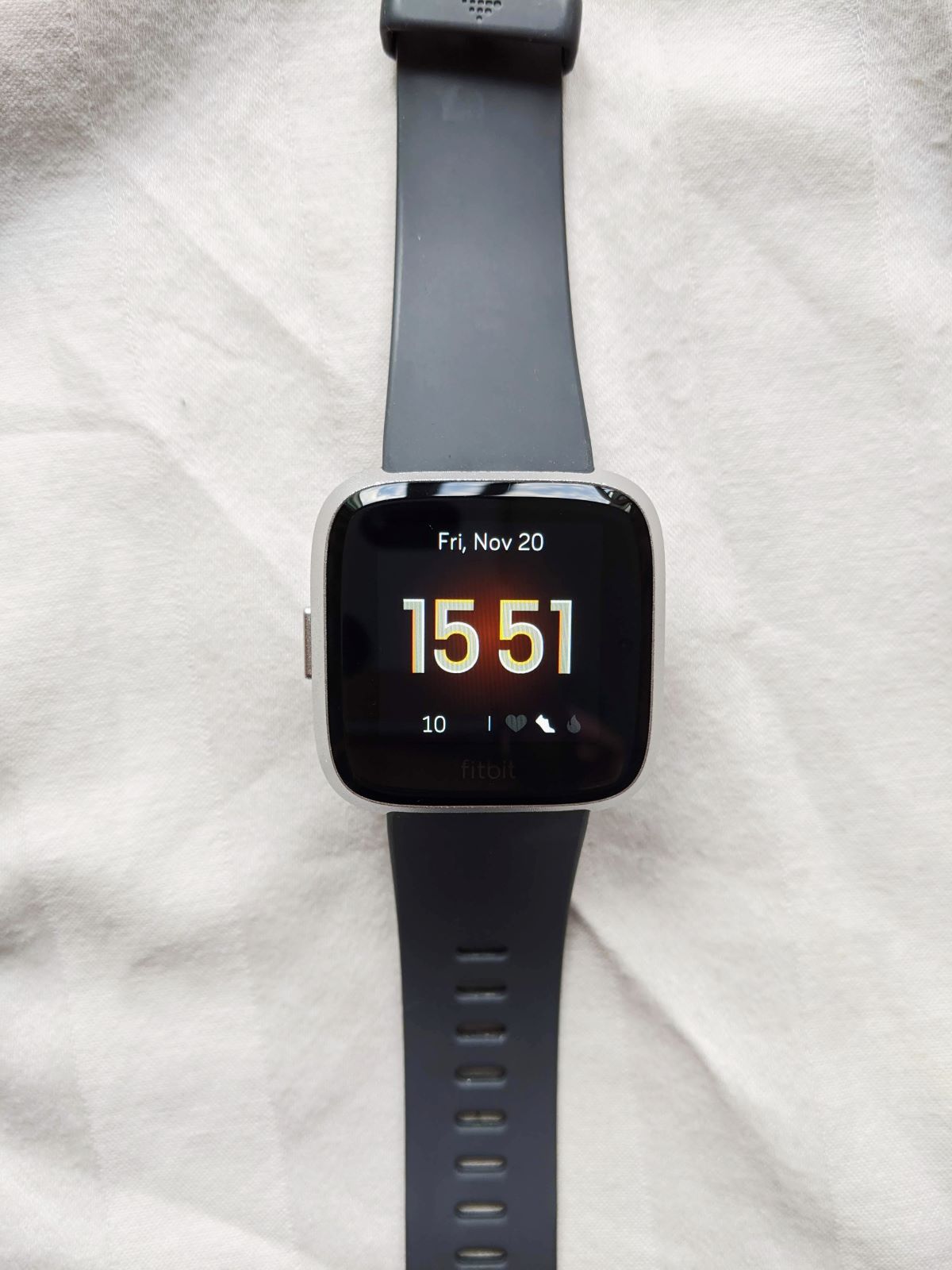 This is my mom’s Fitbit Versa 2, which I would not recommend for running since it doesn’t have built-in GPS (the Versa 3 does though)

Display quality: The Fitbit Sense and Versa have AMOLED displays, which offer crisper colors and brigher screens. The Garmin Venu is the only Garmin to have this display (both the original Venu and Venu 2 have it, but not the Venu Sq). The tradeoff is that this display is more battery-intensive.

Sleep tracking: Both Garmin and Fitbit can track the different stages of sleep, but in a 2020 study published in Nature and Science of Sleep, Fitbit showed the most accuracy among other commercial brands (along with Oura). Keep in mind that sleep tracking in general is still not super accurate though.

Smartwatch features: The Fitbit Sense and Versa let you take calls from your wrist since they have a built-in mic and speaker (Garmin doesn’t have this at all). Both Garmin and Fitbit let you reply to texts from a list of quick replies that you set up. Fitbit also has a more replete app store, including Starbucks card, to-do lists, news, and note. These two Fitbit models also offer Alexa and Google Assistant.

Pandora: Garmin is not compatible with Pandora, while Fitbit is.

Altimeter: All the Fitbits mentioned have barometric altimeters, which allow you to track stairs climbed, and it also tends to give more accurate elevation stats. Some Garmins have altimeters, like the Vivoactive 4 and Venu, but the Forerunner 45, 55, and 245 don’t (the Forerunners only have them starting from the 645).

Cost: The cheapest retail price for a current generation Garmin is $200, though you could get an older model like the Forerunner 35 for around $100 or the Vivoactive 3 for $130. The Fitbit Charge 4 is only $130 retail, and it is often on sale or on third-party sites for $100. That said, remember the the Fitbit Charge tends to die within a year, so it could be better to get a more expensive watch that lasts longer.

Garmin is built for runners and has more metrics to help athletes chasing PRs. They also tend to last longer than Fitbits. On the flip side, Fitbit has more smartwatch capabilities and is known as the best for sleep tracking.

I personally think Garmin makes the most sense for serious runners, but those who are more casual may not need the training metrics and extra battery life. In that case, a Fitbit could be a better fit.

If you’re planning to purchase a Garmin or Fitbit, it would mean a lot if you used my affiliate links. I include Amazon because I know it’s a popular platform with competitive prices, but I want to encourage you to shop directly from the brand or from a more ethical retailer like REI if you have some extra money. Or, consider buying used on Swappa or from a small local fitness store. (I don’t get paid if you shop locally, so if you still want to show your appreciation financially, you’re always welcome to buy me a ko-fi). 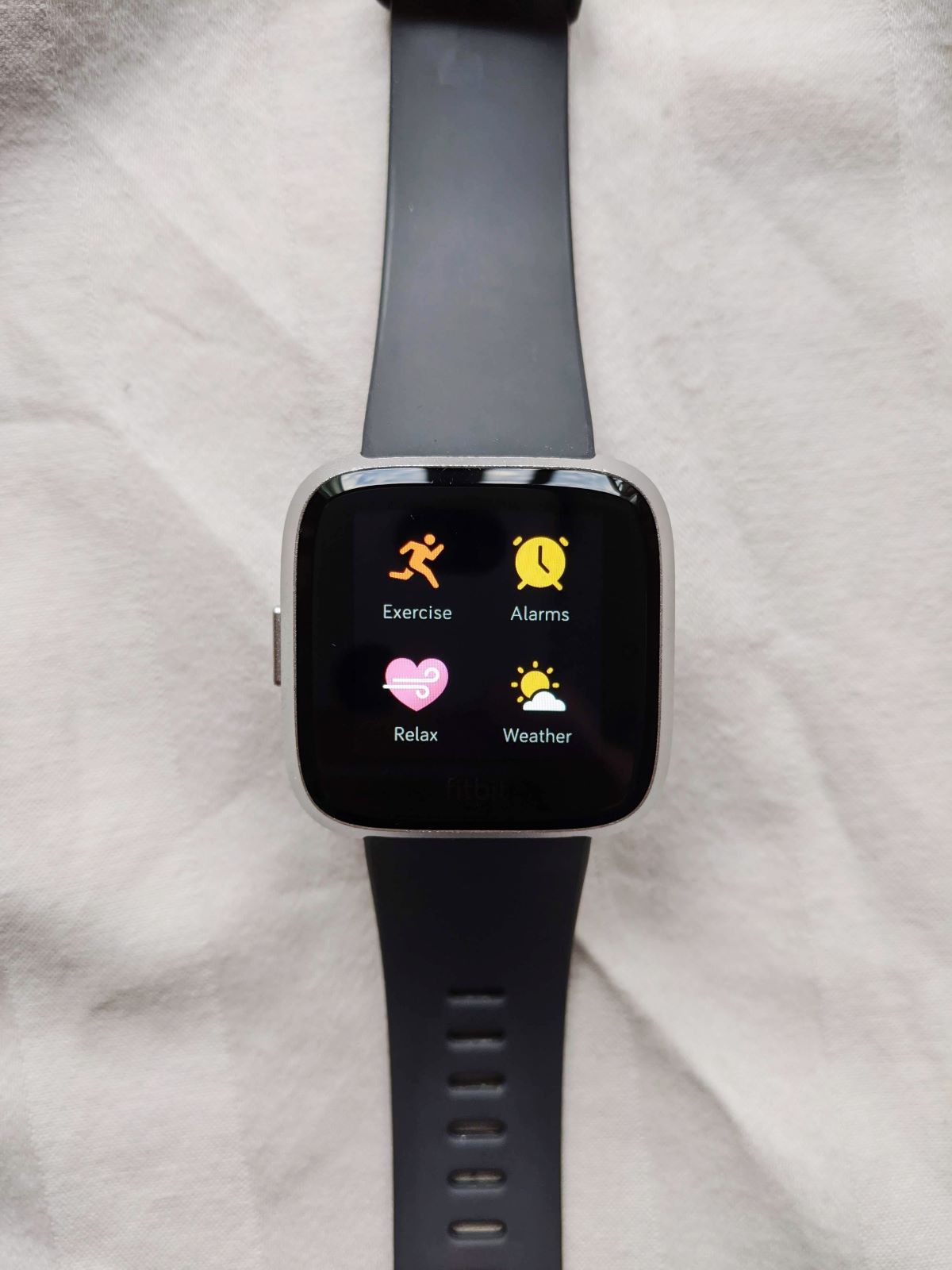 The Charge is Fitbit’s classic model, with a thick band and the rectangular screen built into the band. It’s the most affordable current-gen Fitbit retailing at $130, but doesn’t have the same smartwatch features as the Sense or Charge.

The Versa looks more like a smartwatch and offers more smartwatch features, including a mic and speaker to respond to calls and activate a digital assistant. It retails at $230.

The Sense is an upgrade from the Versa 3 and has more health insights, including skin temperature, an ECG app, and stress scanner with guided breathing exercises. Keep in mind that you may need a subscription to Fitbit Premium to access these insights though. The Sense retails at $330, though you can often get it for $250-300. 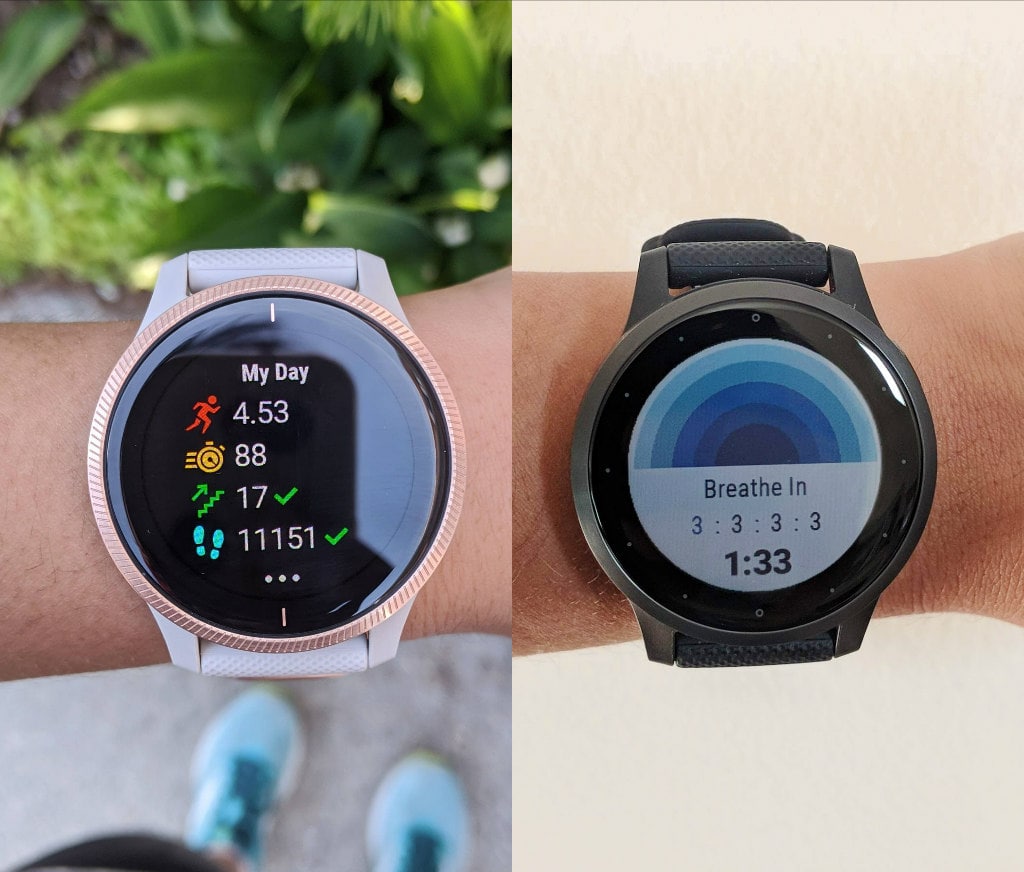 Garmin Venu on the left and Vivoactive 4s on the right.

The FR55 is the latest-generation version of Garmin’s most entry-level watch, and was released in June 2021. It is the first at this price point to track pool swimming and have PacePro. It retails at $200.

The FR 245 is the classic mid-tier watch with extra insights like Training Status and Training Effect. There is also a music function. It retails at $300-350 but can be found for around $250-300.

The Venu is the only series with an AMOLED display. It is touchscreen operated and doesn’t offer the same training insights like PacePro and Training Status, but it does have an altimeter, music storage, and Garmin Pay. It retails for $350 but can be found for $250. There is also a cheaper square version called the Venu Sq and the updated Venu 2.

The Vivoactive 4 is super similar to the Venu, but it comes in two sizes (4 and 4S) and doesn’t have the AMOLED display. It does have slightly better battery life as a result. It retails at $350 but can be found for under $300.

If you’re not sure which Garmin is right for you, I have tons of comparison posts, including:

If you’ve had a watch in either ecosystem (or in both), let us know your thoughts! Since I haven’t owned a Fitbit, I’d be curious to hear from those who have. 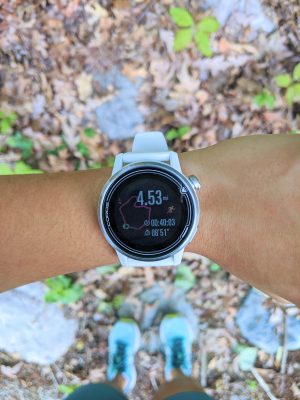 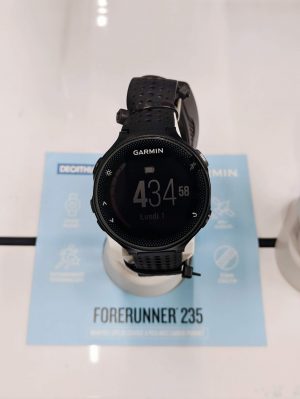 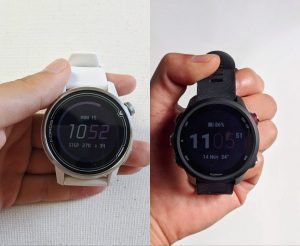 COROS APEX vs. Garmin Forerunner 245: Which Should You Pick?