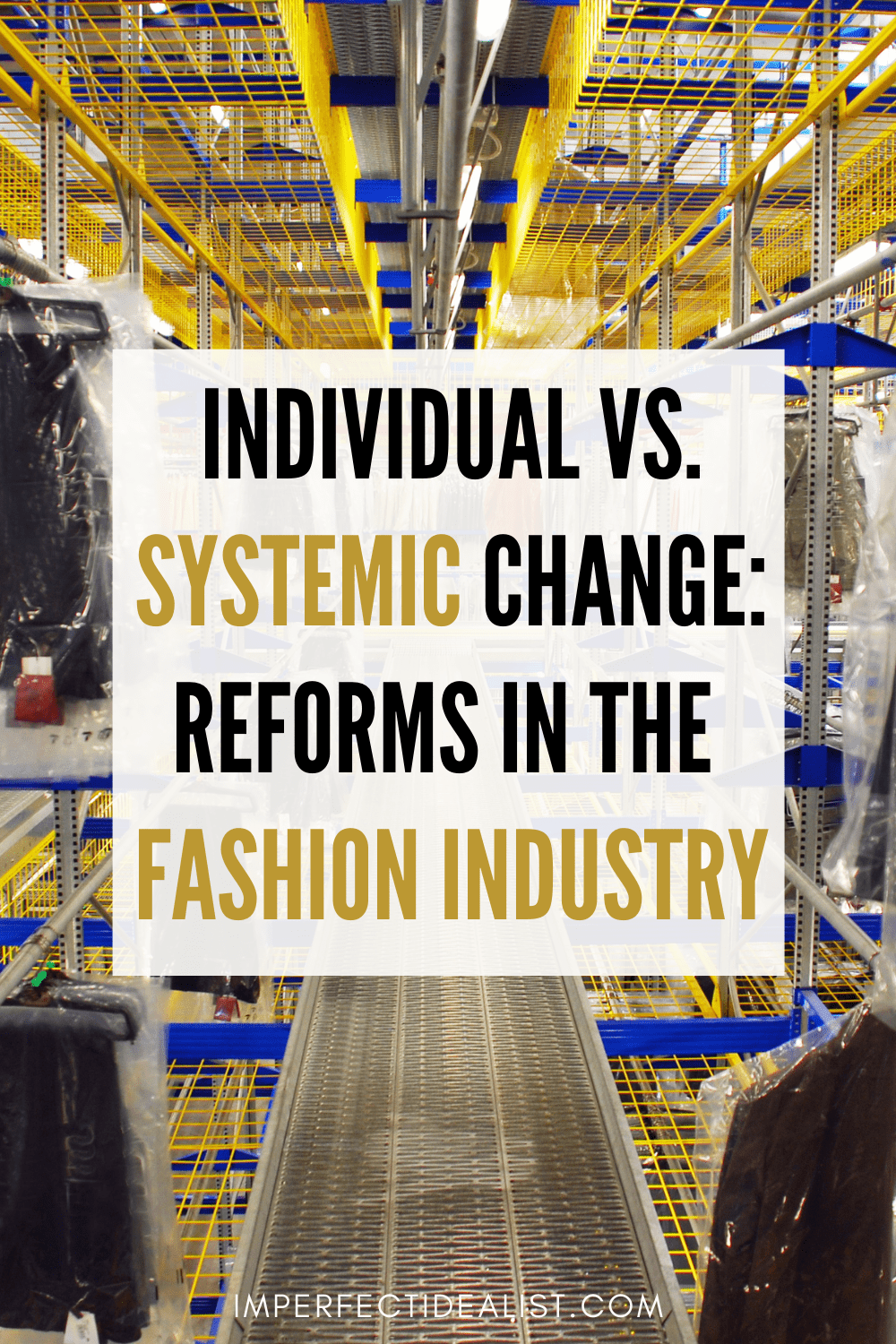 Sustainable fashion isn’t only about conscious consumption on an individual level—it’s also about advocating for larger-scale change to the industry.

In post, I’ll discuss some of the important fashion industry reforms to know, plus how you can get involved.

The individual vs. collective action debate is always a hot topic, and I firmly believe that you can and should have both.

It’s true: buying less on your own won’t stop overproduction, garment worker mistreatment, or the culture of overconsumption. But individual actions are the most tangible ways to get involved, and that can spur your interest into larger-scale reforms. Someone might start by quitting fast fashion and reducing consumption, then they might start writing to brands or teaching others about the industry.

When people say “focus on the companies and not individuals,” it’s kind of a whataboutism. Companies are largely to blame, but so is consumer culture. And while consumer culture is influenced by marketing and capitalism, we aren’t forced to overconsume. We have individual agency.

I frequently see these types of comments on massive fashion haul critiques, and this remark feels like a defense of unsustainable individual behavior and the perpetuation of consumer culture. It’s like the phrase “no ethical consumption under capitalism.”

I also find these comments ironic because individuals need to take action collectively to enact systemic change. Beyond that, how can you change the industry if you can’t change yourself? It’s totally inconsistent to do massive fast fashion hauls but advocate for sustainability and ethics. We need people to recognize the detrimental impact of fast fashion and overconsumption to even consider making larger-scale changes.

I’m not by any means saying you have to be perfect. It’s true that it’s impossible to live a perfectly ethical and sustainable life under current systems. Someone might have to buy fast fashion due to sizing or income limitations, and they can still care about reforming the industry.

I’m just tired of the whole individual vs. systemic change argument being used as an excuse to do nothing. Yes, there’s no ethical consumption under capitalism, but that doesn’t mean doing a $500 fashion haul is equally ethical to buying only what you need.

And yes, we should focus on regulating fast fashion companies, but who is fueling that industry? The people who are overconsuming and glorifying overconsumption.

We should focus on larger-scale changes when we can, which is why I’ve made this post, but it’s also important to examine the ways we actively perpetuate the culture that fuels these industries.

I hope these thoughts help you anytime you’re faced with this debate. With that, let’s get into some important current reforms to know.

The Bangladesh Accord on Fire and Building Safety was created in 2013 in response to the Rana Plaza disaster. This was an incident where a factory building in Bangladesh collapsed, leading to the deaths of 1,100 workers and injuring another 2,500.

Rana Plaza revealed just how little concern garment workers were given. The cracks in the building were a known issue, and the banks and shops had been evacuated earlier that week, but the garment workers had to continue to work.

The disaster also revealed the lack of brand transparency and supply chain tracing: many brands didn’t know they had suppliers at Rana Plaza or weren’t sure if they did.

Under the Bangladesh Accord, brands are held accountable for their suppliers. Suppliers must also provide fair and safe working conditions, and respond to labor concerns, or they become ineligible to work with the 200+ Accord brands.

Since 2013, The Accord’s independent factory inspections have identified 144,000 safety hazards in Bangladeshi factories and 90% have been remediated. They’ve also trained over 1.7 million workers on workplace safety.

The Accord was going to expire at the end of May 2021, but it was extended another 90 days to the end of August. There’s still no updated agreement, and many of the original brands on the Accord have yet to support an extension, or have actively refused to sign a new Accord.

The new Accord would continue to enforce individual brand accountability, but also appoint an independent secretariat to oversee the agreement and aim for the expansion of the Accord into other countries.

The brands that have recommitted are Asos, G-Star, Tchibo, KIK, and Zeeman. Brands that haven’t include H&M, American Eagle & Aerie, Tommy Hilfiger, Zara, and C&A.

We need to pressure brands, especially huge ones like H&M, to sign the new Accord. In fact, just months ago, a 20-year-old named Jeyasre Kathiravel was raped and murdered by her supervisor at an H&M supplier in India. In the months leading to her death, she and other workers had reported harassment at work. Garment worker rights are clearly still not guaranteed, and it’s awful to see brands refuse to provide adequate protections. The expansion of the Accord into other countries could help prevent these needless deaths by holding brands accountable.

How to Take Action:

Here’s an email template by Remake Our World with instructions on how to send it to H&M. You can also use the site Rana Plaza Never Again to contact a list of the major brands that haven’t agreed to a new Accord.

I’ve copied this email text below because the email in the PDF is not easy to copy and shows up with typos if you try.

The Rana Plaza disaster killed over 1,100 garment makers and we have not forgotten. On August 31st, 2021, the Bangladesh Accord will expire, and we are demanding that H&M lead the way in signing for the Accord’s renewal.

With the recent news of Jeyasre Kathirvel’s rape and murder in an H&M supplier facility and reports of stolen severance payments to workers sewing for H&M, and the brand’s involvement with forced labor in the Uyghur region, signing the Accord is a first step towards addressing the humanitarian crisis that remains intricately tied to the fashion industry and your supply chain. We are counting on H&M to be a leader. We are counting on you to sign the Accord agreement.

[Your name]
A PayUp Fashion Signatory

Please also email Zara to recommit to the Accord. Remake has another template you can follow that is easily copied. They also have a template for Tommy Hilfiger.

I’ve talked about this in another post, so I’ll keep this brief. Basically, just because something is “made in America” doesn’t mean it’s ethically made. Garment workers in LA are sometimes paid less than $5 an hour. How is this possible? Workers are paid a piece rate, meaning they get paid per item, rather than per hour of work. While the piece rate technically must match at least minimum wage, there are several layers of subcontracting that make it difficult to hold brands accountable for this wage theft.

This is why the Garment Worker Protection Act was created, and garment workers are leading the movement to get this passed in California. This act would eliminate the piece rate system and expand the liability of brands. The bill died in assembly in fall 2020, but it’s since been reintroduced and has passed its first few rounds of votes.

To show your support for the bill, if you live anywhere in the US, you can sign the Garment Worker Center Petition and share it with friends.

In February 2021, more than 80 industry insiders and organizations signed a letter urging President Biden to appoint a Fashion Czar. This would be a government official in charge of regulating the fashion industry and helping create greener economic opportunities in the US.

In the past, presidents have appointed czars to address crises, including WWI preparedness, the AIDS epidemic, and COVID-19. Since fashion is ubiquitous—everyone wears clothes—it seems odd that we don’t yet have a centralized office or position to oversee the industry.

But are the issues of fast fashion pressing enough for a czar? You could certainly argue so. California has the greatest concentration of garment workers in the US, and 85% are paid subminimum wages. The industry is also responsible for 13 million tons of textile waste per year in the US, and has contributed to microplastic pollution, deforestation, and polluted waterways around the world.

That said, a Fashion Czar isn’t the end-all, be-all of fashion reform. It will be incredibly complicated to regulate the industry since it’s so globalized. Clothing that’s sold in the US is often made abroad, and even clothing sewn in the US may involve textiles and other parts from abroad.

Another concern is the cost of any regulations, as brands may decide to take the manufacturing abroad if they have to pay higher wages here. There must be some sort of international trade agreement to level the playing field and ensure fair wages and working conditions across the supply chain.

As an example of what a Fashion Czar could do, France actually had an unofficial minister of fashion. Her name is Brune Poirson, and she was a secretary of state to the minister for the ecological and inclusive transition. She spearheaded a lot of sustainable legislation, including the zero waste law, which was passed in the Senate in 2020. This law bans the destruction of unsold goods, which total around 630 million euros annually in France. The law also phases out single-use plastics beginning January 2021, bans microplastics in makeup, and makes filters mandatory on industrial washing machines.

There hasn’t been an update on the US Fashion Czar, and I don’t think the Biden administration ever responded to the letter. There is a petition from a few months ago that wasn’t widely circulated. If you want to show your support for the development of this role, you can sign the petition.

Note: do NOT donate to the petition. That money goes to the petition platform and not the specific cause. If you want to support garment workers directly and donate to change the industry, I recommend donating to Pay Up Fashion.

How to Get Involved

There are many ongoing reforms, and I’m definitely not one of those industry insiders who is always up-to-date. I encourage you to follow Fashion Revolution and Remake Our World on Instagram to get more updates and ways to use your voice as a consumer. You can also check their websites regularly for more in-depth articles and action items.

Loud Bodies is known for its beautiful, fairytale-eque dresses and inclusive size range. But is it… 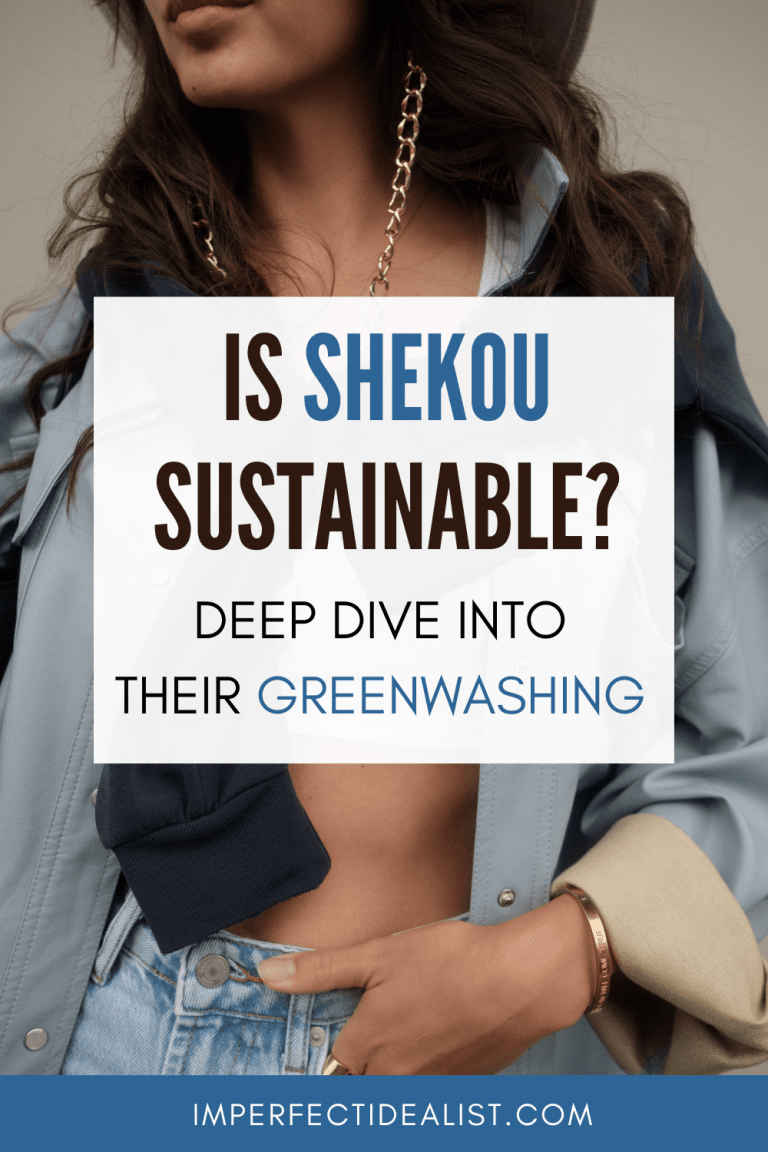 SHEKOU is a trendy, low-cost brand based in New Zealand. They state that their mission is… 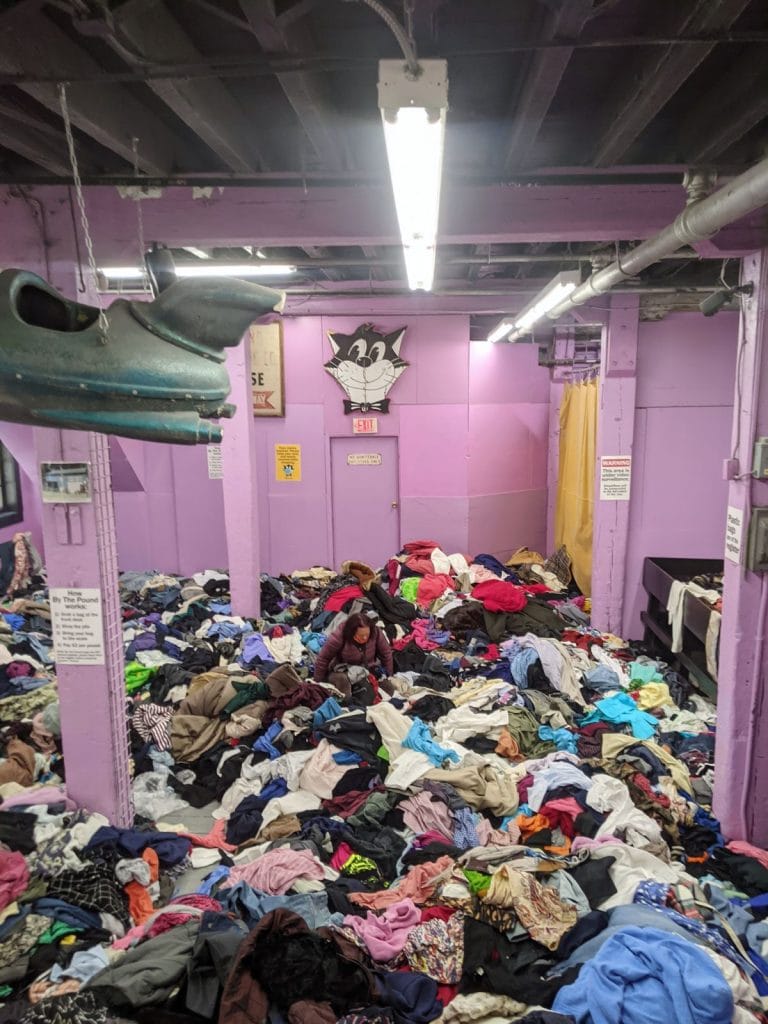 When I first discovered Forever 21 over 12 years ago, I was hooked. I’d never been… 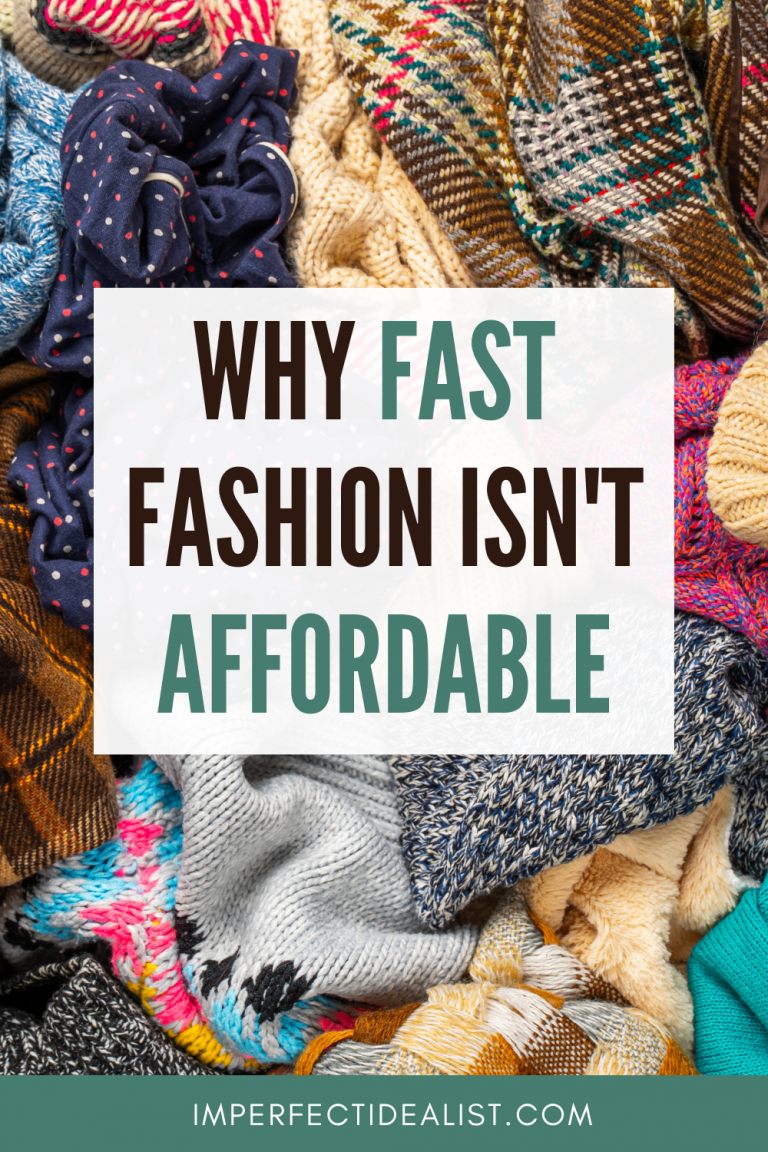 While there are many people who buy fast fashion out of necessity, there are also many… 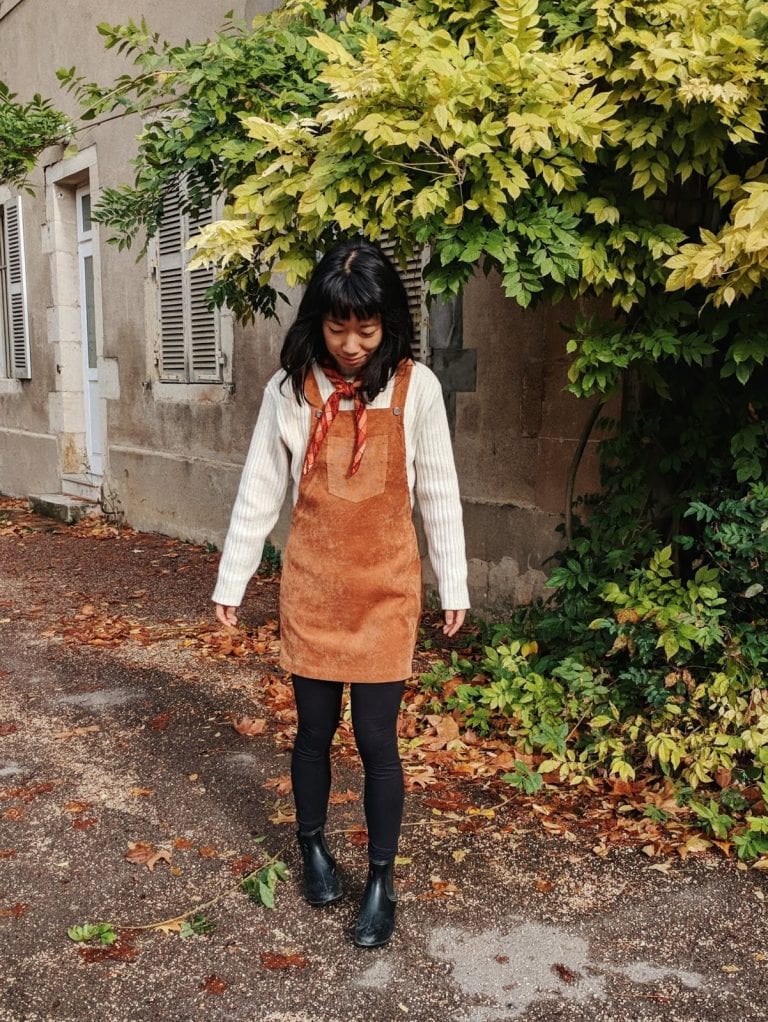 About a month ago, I had a sudden urge to buy things. While I typically purchase… 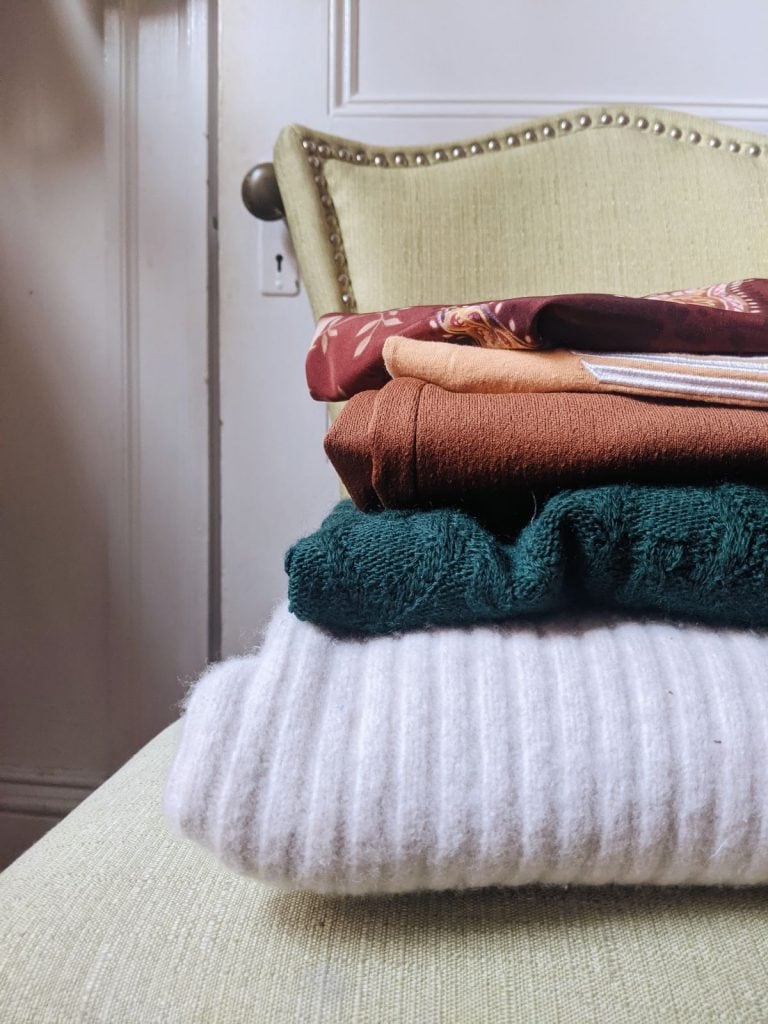 As a sustainable fashion advocate, I’m clearly passionate about the field, but I recognize that there…