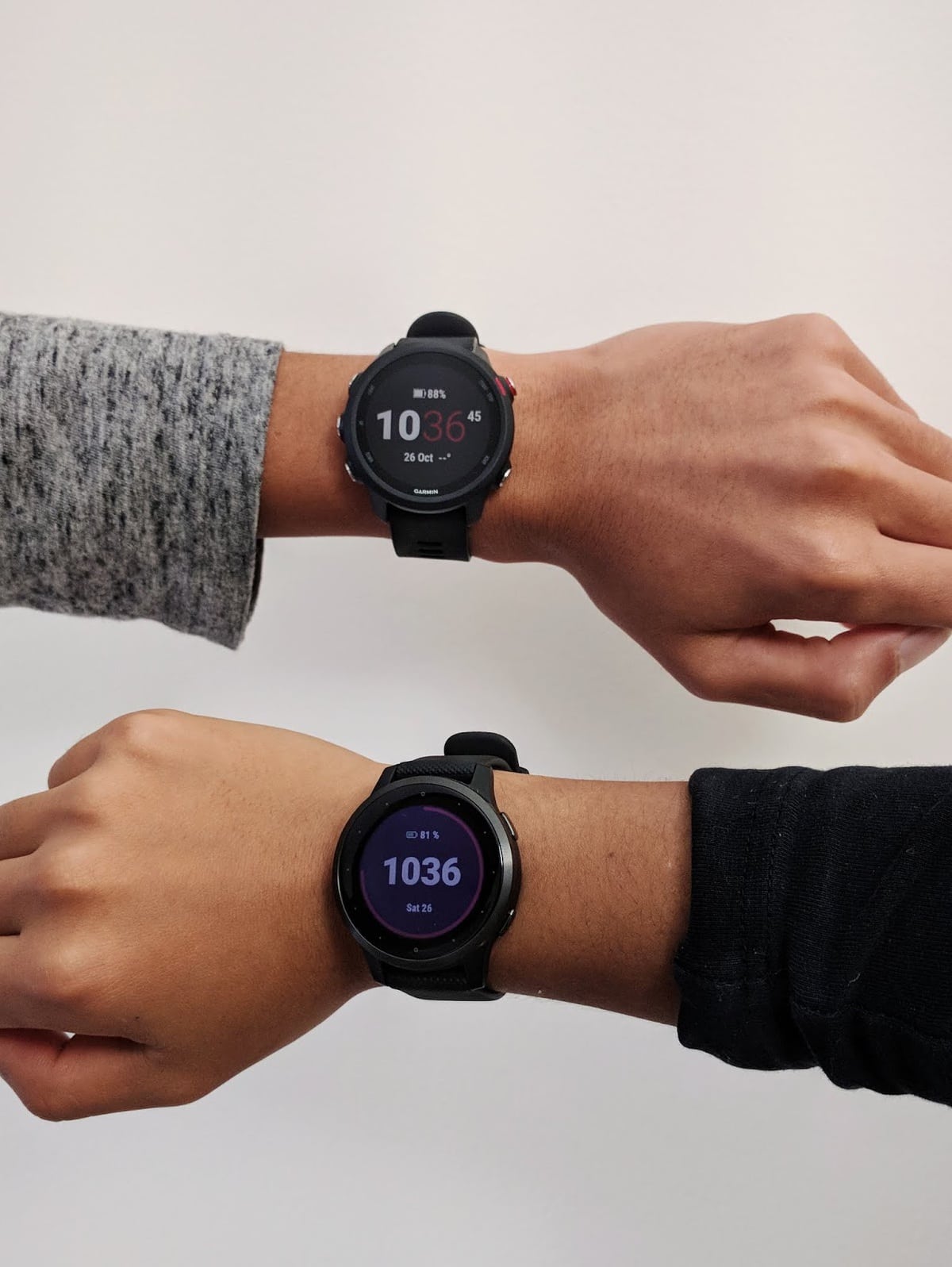 The Forerunner 245 and Vivoactive 4 are some of Garmin’s most popular models, but they have some pretty different functions. In this post, I’ll go over the reasons to choose one over the other.

As a quick background, I’m mainly a distance runner (road and trail) who does a lot of cross-training (swimming, biking, yoga). I like to wear my GPS watches almost 24/7, and also look at the fitness tracking data (a girl’s gotta know if she’s hit her 10,000 steps!). So, I’ll be looking at these watches from not only a running perspective, but also a multisport and everyday fitness wearable perspective. I got to try these watches for a month, and here’s what I thought.

This post contains affiliate links, so I may receive commission on any purchases you make. This doesn’t cost you any extra. If you’re not ready to buy yet, clicking through also helps 🙂 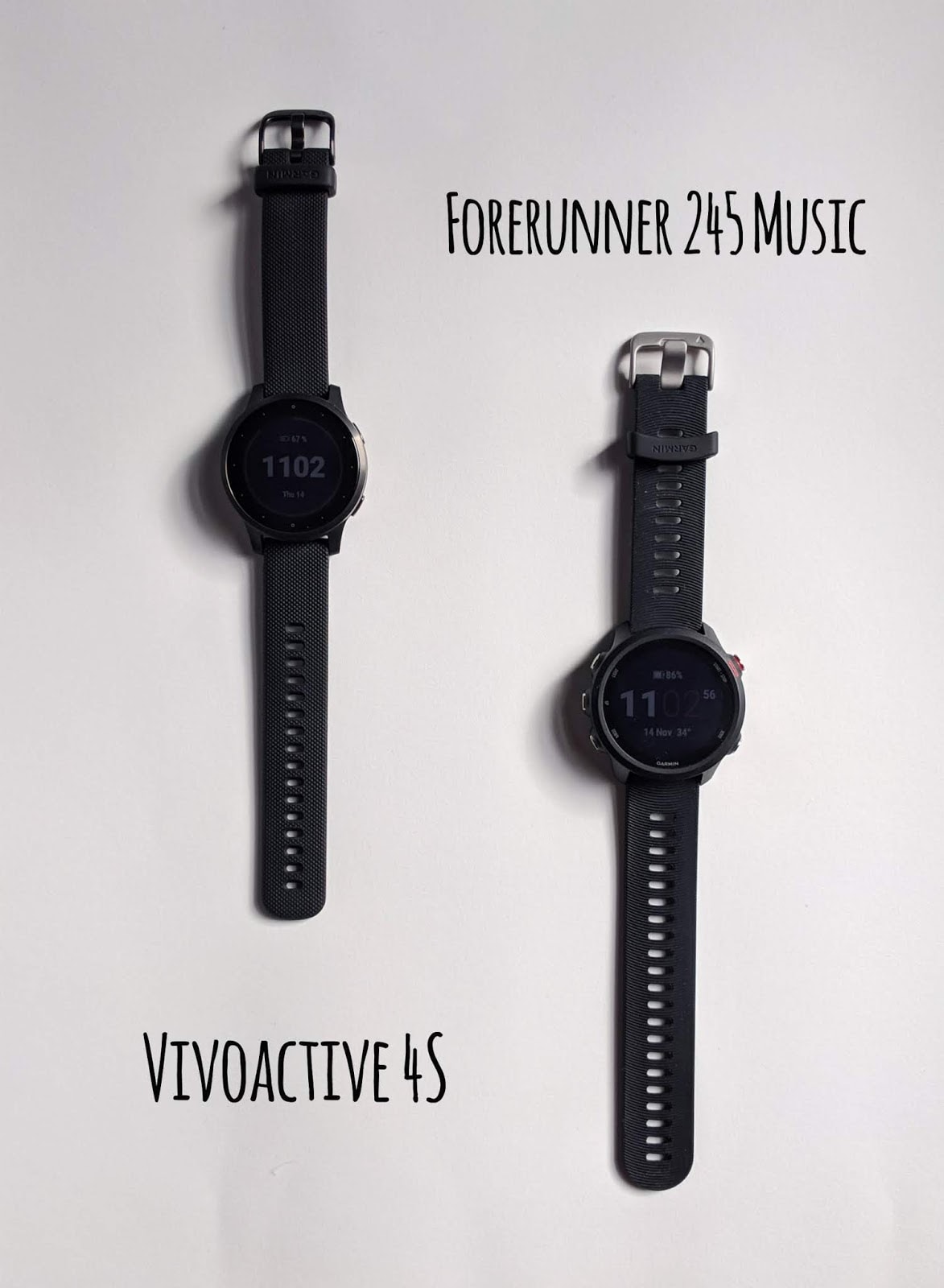 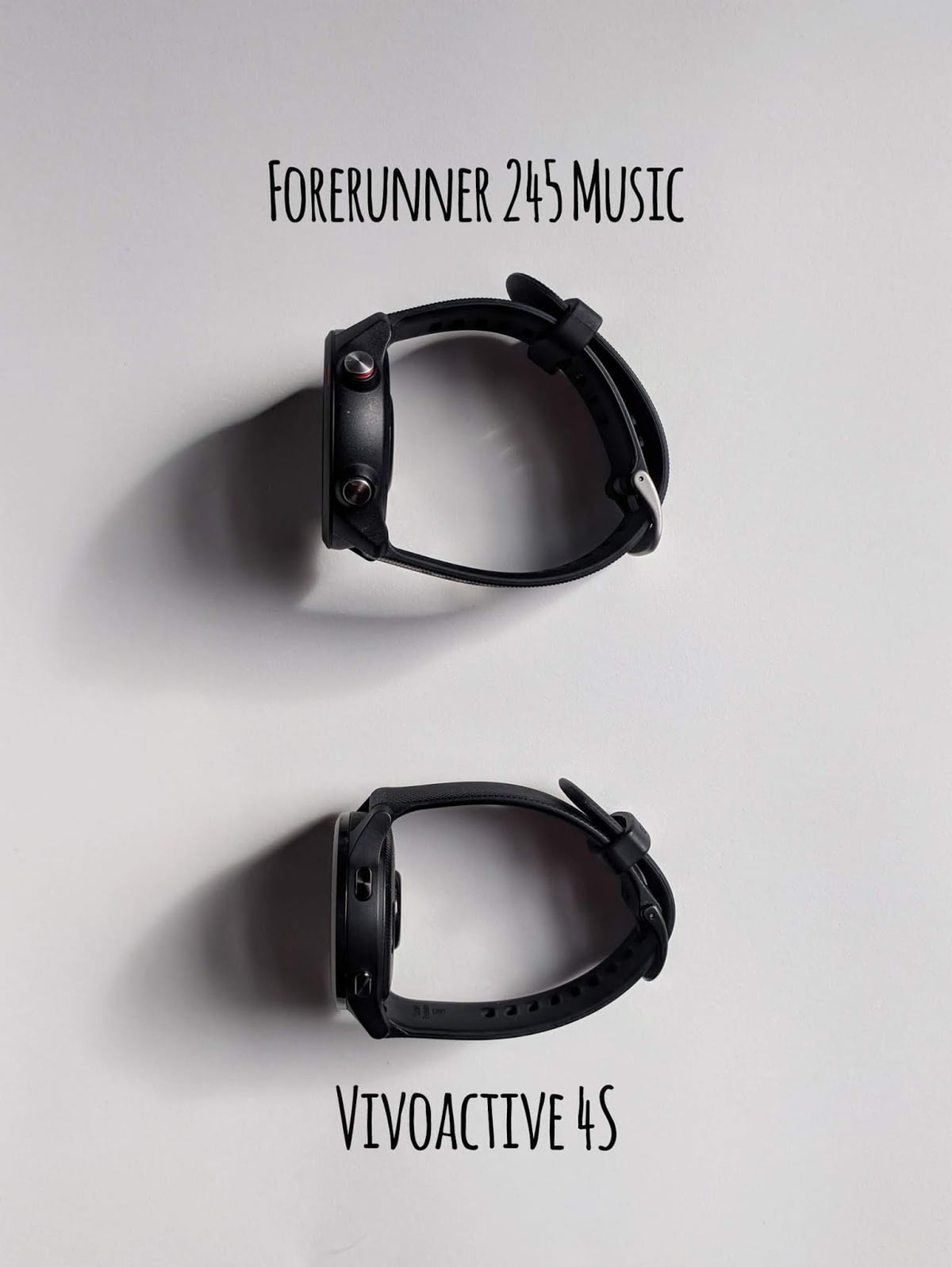 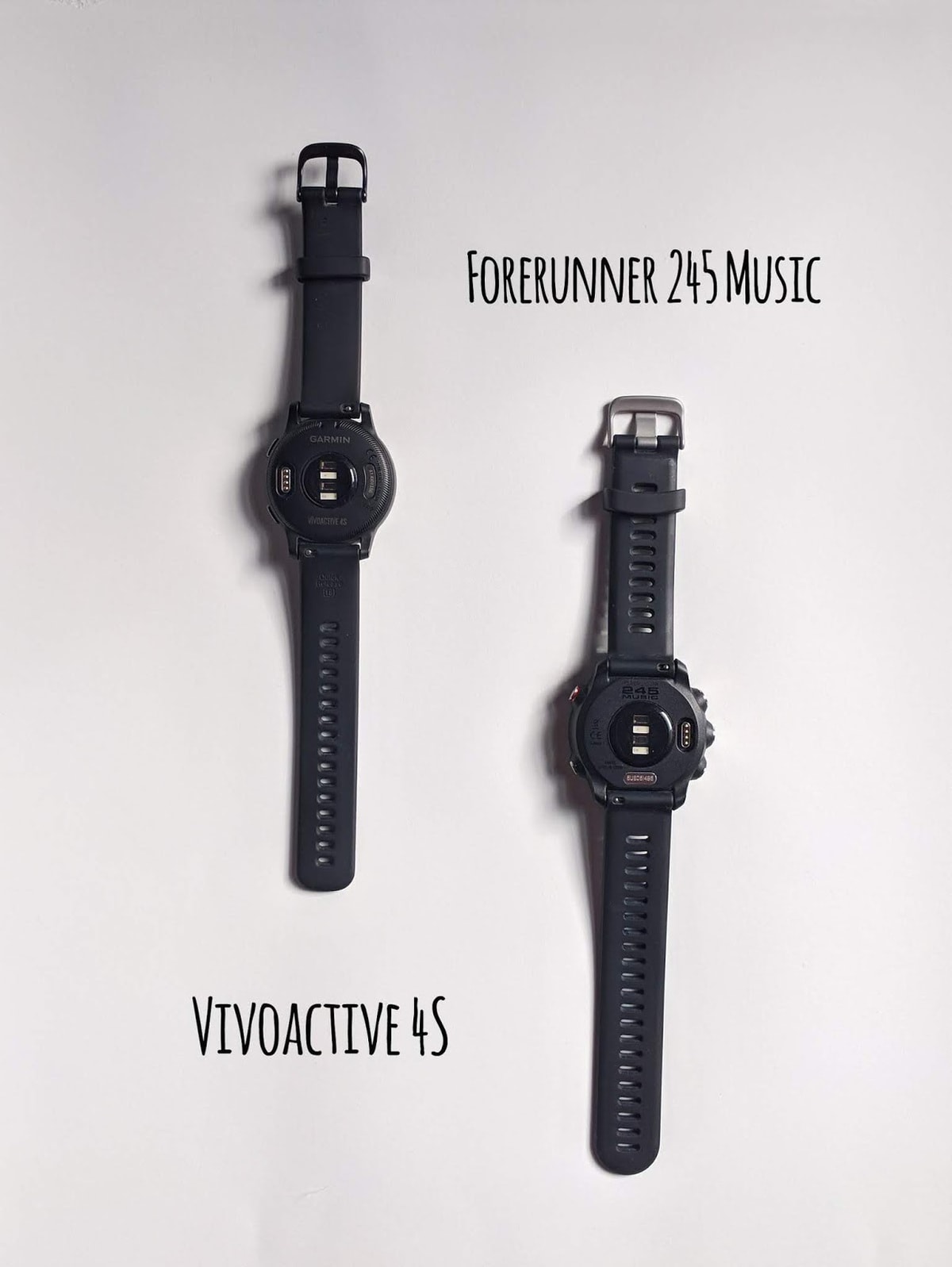 Let’s first take a look at some of the major features the watches have in common. Both have: 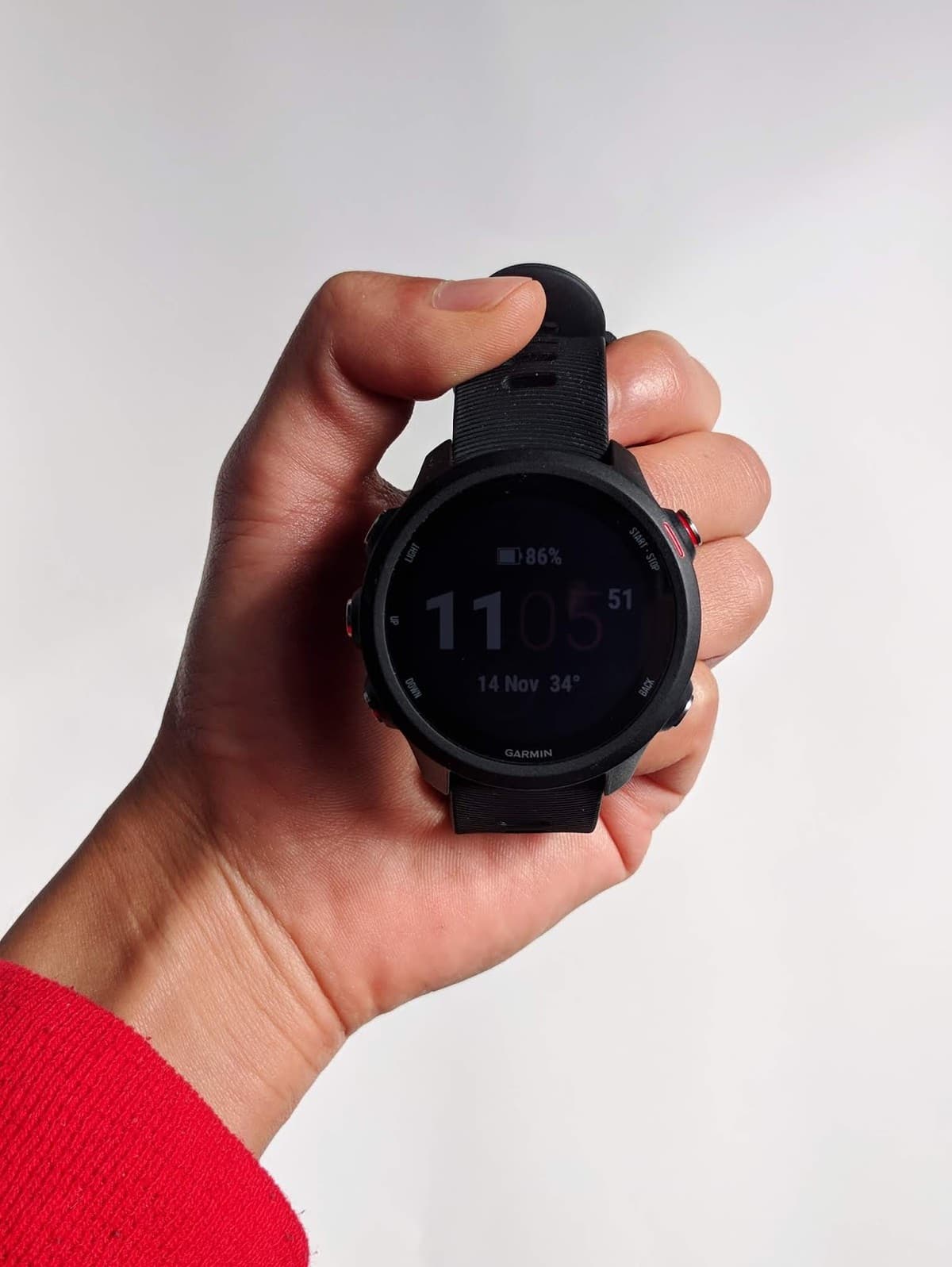 Why to Pick the Garmin Forerunner 245

This watch definitely feels like more of a GPS watch than a smartwatch or everyday fitness tracker. The build is sportier (but still very comfortable to wear), and there is no touchscreen.

If you’re a trail runner, you’ll like the Forerunner 245. There’s a specific “trail running” activity, which has a specific screen for elevation, and a breadcrumb trail with a compass (note that the elevation is not as accurate as the Vivoactive 4’s—more about that later). It also has UltraTrac mode, which periodically shuts GPS off during longer activities, like an ultramarathon. This compromises accuracy, but it does save battery. The battery life is supposed to be 24 hours with GPS, which is far greater than the Vivoactive 4’s 18 hours and the 4S’s 15 hours. If you’re planning to be out on the trails for a long time, this might be your watch. That said, the Forerunner 245 doesn’t have a barometric altimeter, so your elevation stats won’t be as accurate (I’ll go more into this in the next section).

There are also a lot more performance and training metrics, like:

I’ve personally found that the Recovery Advisor tends to be conservative, and tells you to take it easy longer than necessary. Note that “recovery time” doesn’t mean “don’t work out at all”—it just means that you shouldn’t do hard efforts during the recommended period of time. Even then, I’ve been told to recover for 36 hours after a regular swim, which felt off. Still, the feature is still a good source of feedback, and helps you figure out how the activity might’ve impacted your energy levels.

The Race Predictor also tends to be overly optimistic, in my experience. I ran a 1:55 half marathon when it predicted a 1:49 (it also said I could do a 5k in 21 mins, and 10k in 49 mins—while I’ve hit these targets in the past, I was definitely not in that shape then). That said, it could be because I actually don’t run that frequently (2-3 times/week) and cross train the other days. Others have reported that the feature is uncannily accurate. I think it depends on what you’re training for, how often you’re running, and the conditions of the race, of course.

People also sometimes have beef with the Training Status metric, as it will sometimes tell you that your training is “unproductive” (how rude lol) when you’ve been training hard. You have to remember to take the stats with a grain of salt.

Overall, however, these metrics can be helpful to understanding how effective your training is. This is a big draw of the Forerunner 245 over the Vivoactive 4, as you won’t find these features in the Vivoactive 4.

One final feature of the Forerunner 245 are its Audio Prompts, which aren’t available in the Vivoactive 4. You can set up your Garmin Connect app to include announcements during your workout, including: pace, speed, heart rate, lap number, lap time. You must have your phone with you, but if you have the music version of the watch, you can get Audio Prompts directly from your watch while connected to Bluetooth headphones. 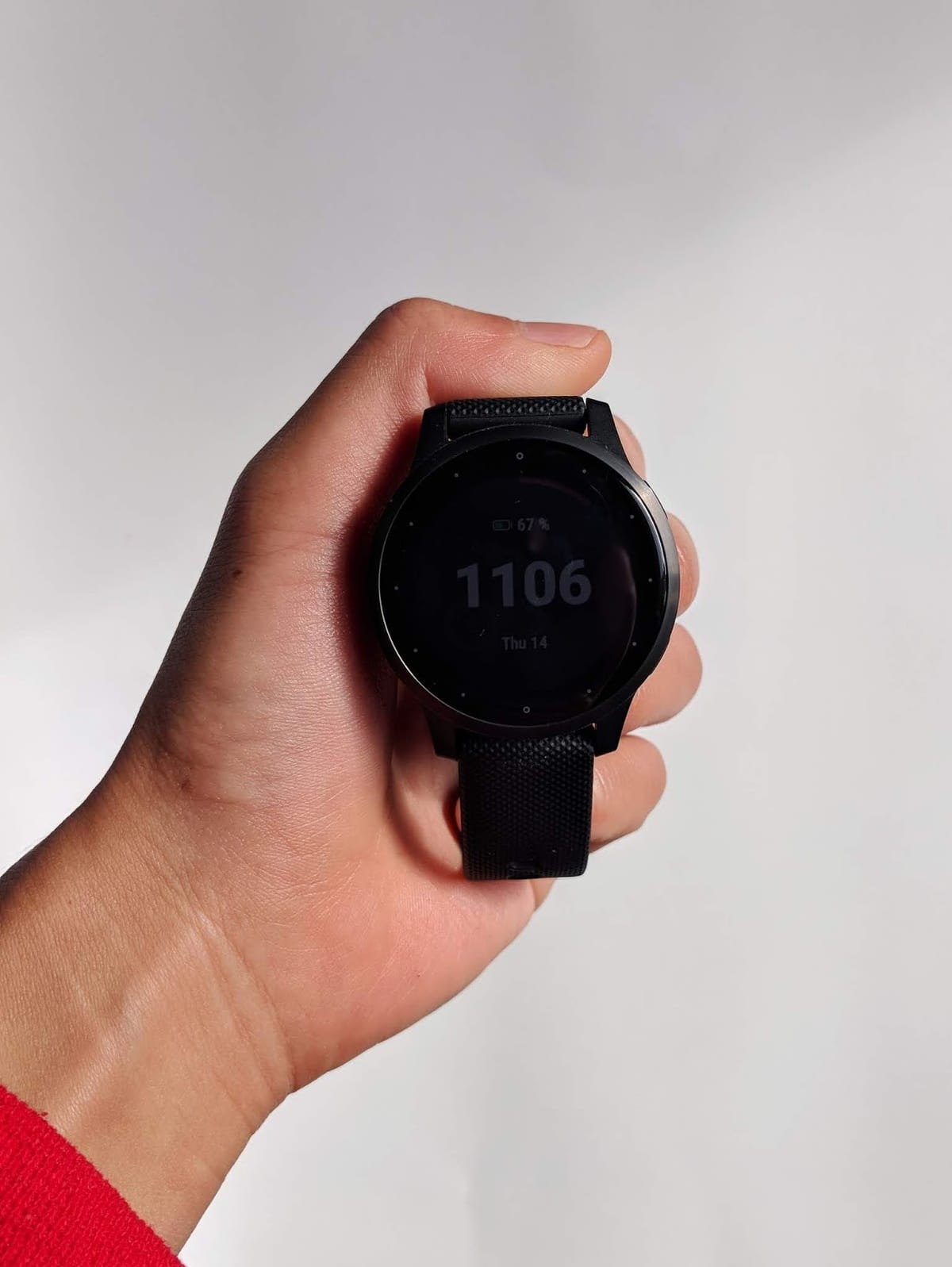 Why to Pick the Garmin Vivoactive 4

Quick clarification: I got to test the Vivoactive 4S, which is basically a smaller version of the Vivoactive 4 (40 mm vs. 45 mm), with the same features. The battery life of the 4 is slightly greater than that of the 4S though, as it has a bigger battery (you get 18 hours vs. 15 hours in GPS mode, 8 vs. 7 days in normal smartwatch mode).

The Vivoactive 4 definitely feels more like a smartwatch, as it has a touchscreen and fewer buttons—you only see two very discreet side buttons, vs the Forerunner 245’s five buttons. The touch screen is responsive, but not overly so; I’ve never had a problem with it turning on when it wasn’t supposed to.

One of the handy features I appreciated was the “shortcut” you could add when you swiped right. It made it easier to access the timer, stopwatch, alarms, flashlight, brightness, or wallet (you could also disable it).

The altimeter also impacts whether or not the watches track the flights of stairs you’ve climbed. The Forerunner 245 doesn’t, and the Vivoactive 4 does. So, if elevation/stairs are really important metrics to you, you might consider the Vivoactive 4 instead.

One cool feature of the Vivoactive 4 are its on-screen workouts. The watch has pre-programmed yoga and Pilates workouts that you can follow through animated on-screen demonstrations. This feature is unique to the Vivoactive 4, Venu, and Fenix 6 series. Other Garmins generally allow you to program your own workouts and follow premade ones, but they’re not animated.

The Vivoactive 4 actually tracks a wider range of activities, including:

Finally, the Vivoactive 4 also has Garmin Pay, while the Forerunner 245 doesn’t. Garmin Pay allows you to make contactless payments with your watch—you don’t need your phone or wallet. I haven’t tried this feature yet, but will report back when I have. Keep in mind that this is only compatible with certain banks and cards, so be sure to check if you want to use this feature. 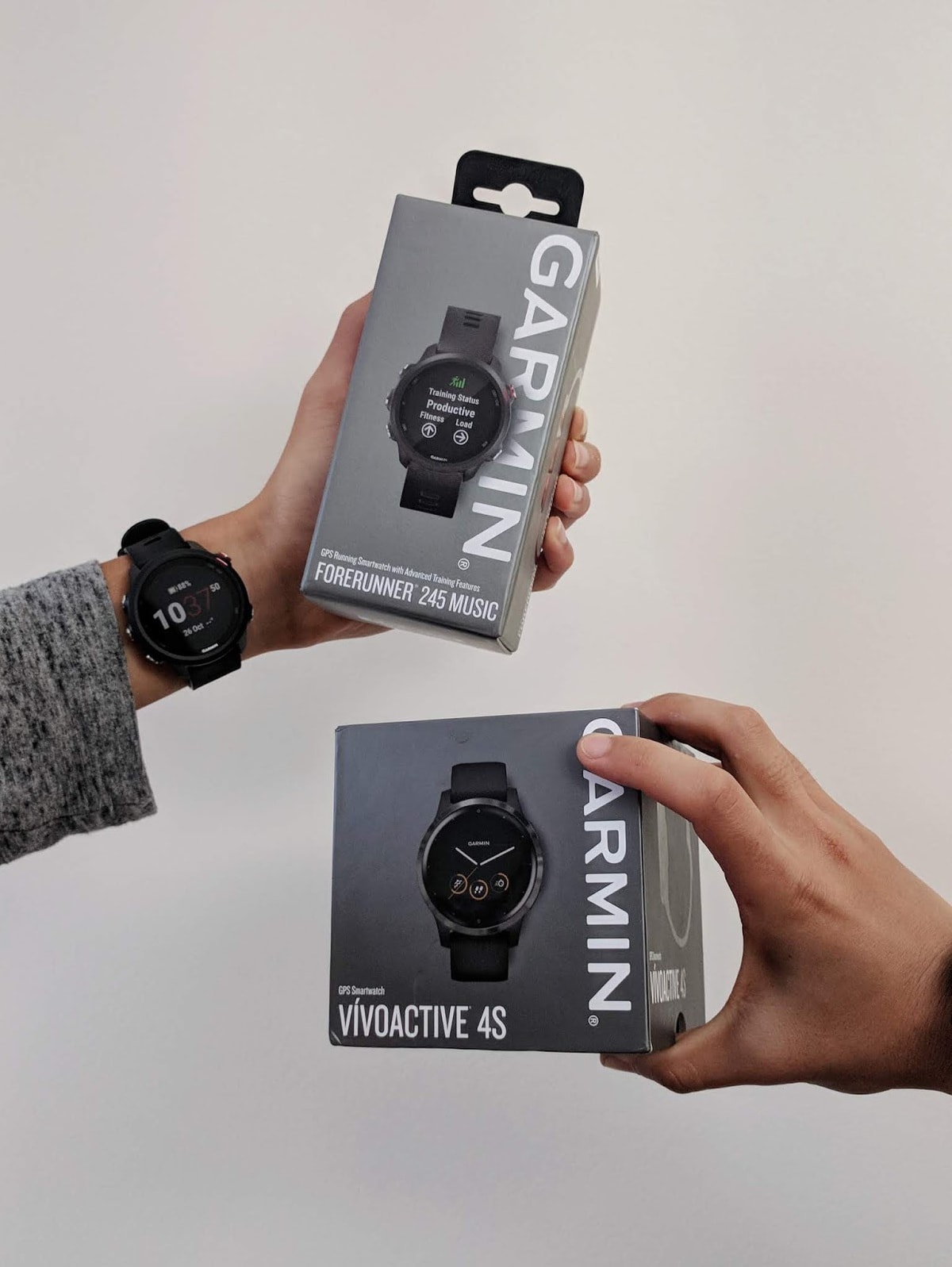 Here’s a quick chart comparing the two. Note that the size and battery life of the Vivoactive 4S are slightly different.

If you want a watch with better battery life, more training metrics, faster GPS, and Audio Prompts, go with the Forerunner 245.

If you want a watch that feels more like a smartwatch (touchscreen, fewer buttons), tracks stairs climbed, gives more accurate elevation stats, and tracks a wider range of activities specifically, go with the Vivoactive 4.

In my previous post on the Garmin Forerunner 235 and Vivoactive 3 (Music), I ultimately went with the Vivoactive 3 Music, which is what I still have today. If I were to keep either of these new watches, I would actually go with the Forerunner 245 (Music).

The main concerns I had with the older Forerunner 235 are now resolved in the update—the heart rate monitor no longer juts out, and the build doesn’t feel as bulky. The training stats are also very valuable as a runner trying to go for PRs. My only qualm would be the lack of altimeter, but the other features outweigh this drawback (remember that you can upload your workout to Strava, which will correct your elevation stats). The Forerunner 245 Music also retails at the same price as the Vivoactive 4 ($350), and the non-music Forerunner 245 is even cheaper at around $300.

Where to Buy the Garmin Forerunner 245 (Music) and Vivoactive 4

If this review helped you, it would mean a ton if you purchased through my affiliate links. I also want to encourage you to buy secondhand or from small, local running stores if you can. I don’t get paid if you do that, so if you still want to show your appreciation financially, you’re welcome to buy me a ko-fi. 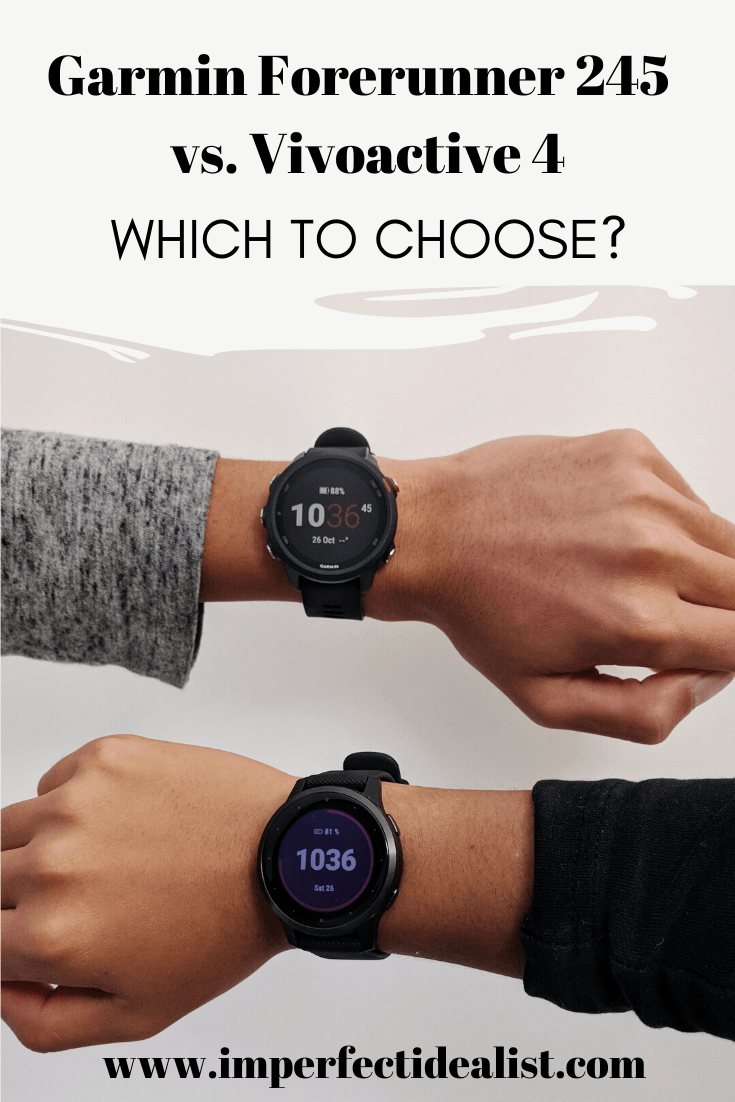 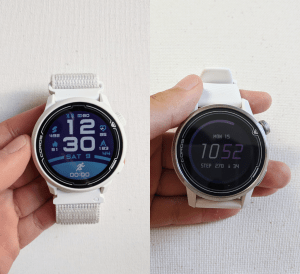 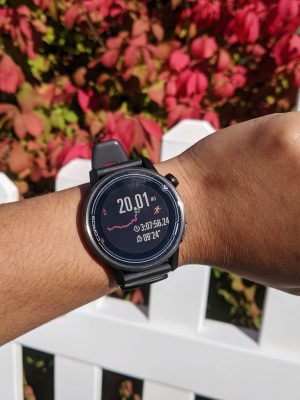 COROS vs. Garmin, From a Marathoner Who’s Had Both 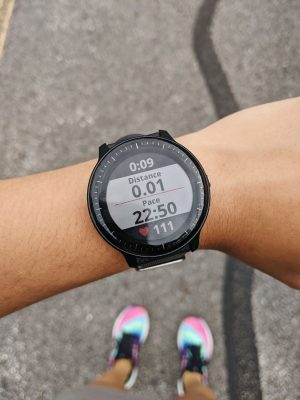