Montreal and Quebec City are the most popular destinations in the Quebec province of Canada. Many travelers visit both in the same trip. But what if you only have time for one?

After spending time in both, here’s my take on Montreal vs. Quebec City.

This post contains affiliate links, meaning that I earn a small commission on any bookings or purchases made through those links, at no extra cost to you. This income helps me keep my blog running and is much appreciated!

Montreal and Quebec City are the largest cities in the Quebec province, but Montreal is more than three times larger with a population of 1,780,000 vs. Quebec City’s 542,298.

As a result, Montreal feels more urban and its tourist attractions are sprawled across the city. On the flip side, Quebec City feels more like a quaint European old town. While there are more urban areas, the main points of interest are in Vieux-Québec (Old Quebec).

Montreal does have an old town of its own, with historic stone buildings, but it really doesn’t compare to Quebec City’s colorful facades. 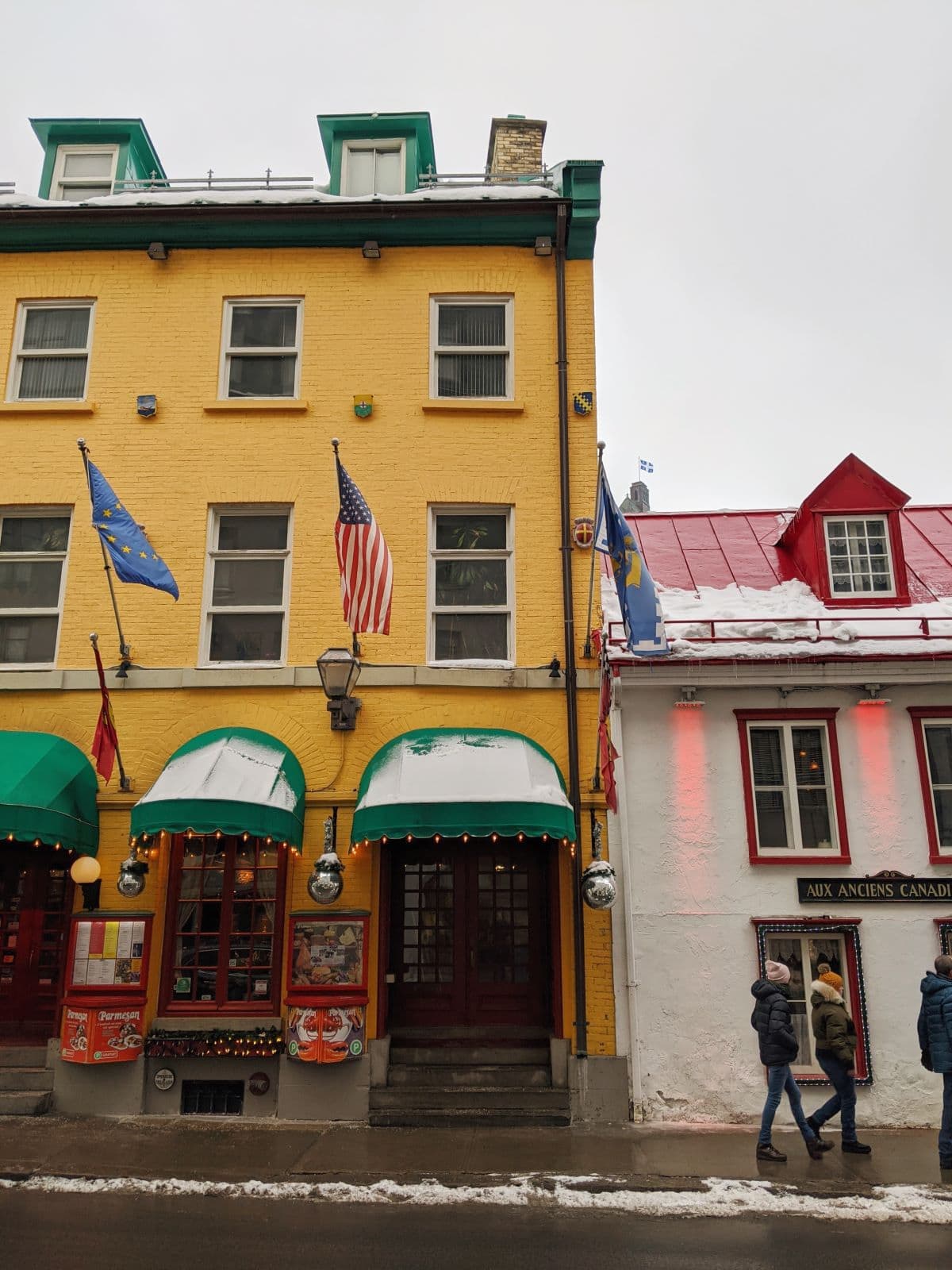 Both cities have pretty similar costs, and cost of living indexes rank them almost equally. Coming from Boston at the time, I found the food prices pretty similar when converted back to the US dollar, and they were maybe slightly cheaper.

Accommodation was also cheaper compared to big US cities, and I was able to find Airbnbs for $20-40/night (USD) for a private room. Because Montreal’s attractions are all over the city, I found it easier to find budget housing closer to the things I wanted to do. To get housing in Quebec City at the same price, I had to stay couple miles outside the Old Town.

For hotels, you can expect to pay $50-200 USD, depending on the amenities. If you’re looking for hotels, here are some options in convenient locations in both cities. 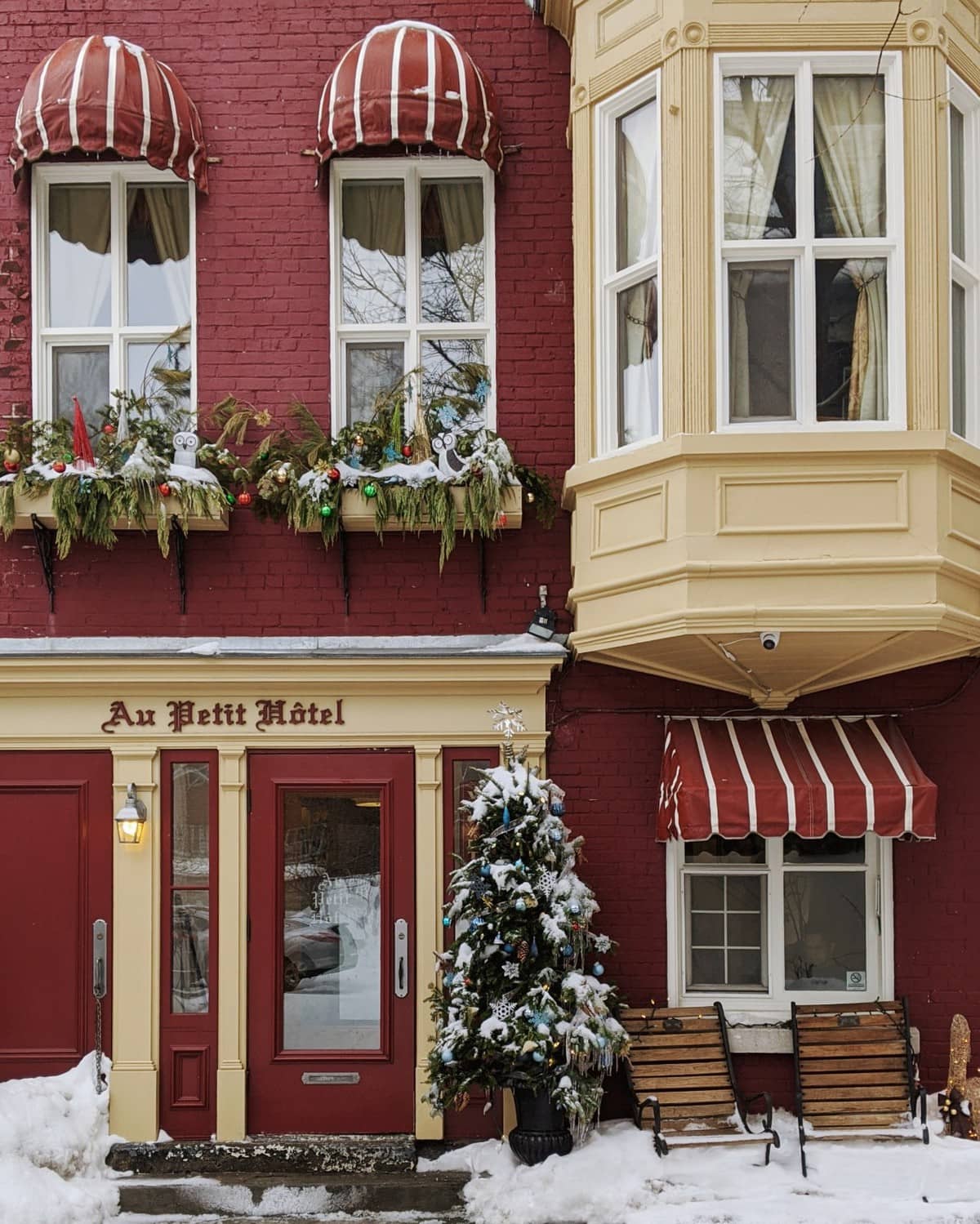 A note on currencies: If you’re coming from a different country, it’s likely enough to have a travel credit card that waives foreign transaction fees (that was how I got around). If you do need cash, I recommend the Wise free borderless account. It allows you to hold 50+ currencies and withdraw the equivalent of 100 USD from ATMs for free each month. If you don’t have the local currency in your account, they’ll draw from the currency that’s the cheapest for you and use the real exchange rate.

I actually ended up getting a Wise account right after this trip because of my issue getting a bus ticket without cash, so I’ll be ready next time!

It’s likely easier to get to Montreal than it is to Quebec City. Montreal has a larger airport and main train station. If you’re coming by plane, public transport takes 30 minutes to get you to the city center, while it takes over an hour from the Quebec City airport.

Within the city itself, Montreal has the metro, which is easy to use and takes you almost anywhere you want to go. Quebec City only has a bus system, and despite speaking and reading French fluently, I found it pretty confusing to understand where to buy tickets with a credit card instead of cash. It didn’t seem possible within the area I was staying, so I ended up never using the bus as a result.

I will say that Quebec City is highly walkable though. Even though I stayed in the suburban part of town, it was a decently pleasant walk into the city, and nearly all the touristy spots are in one place. In Montreal, I did have to take an Uber a couple times since there wasn’t a metro or convenient bus nearby (usually when I was going to/from Mont Royal, the major hill/park in the city). 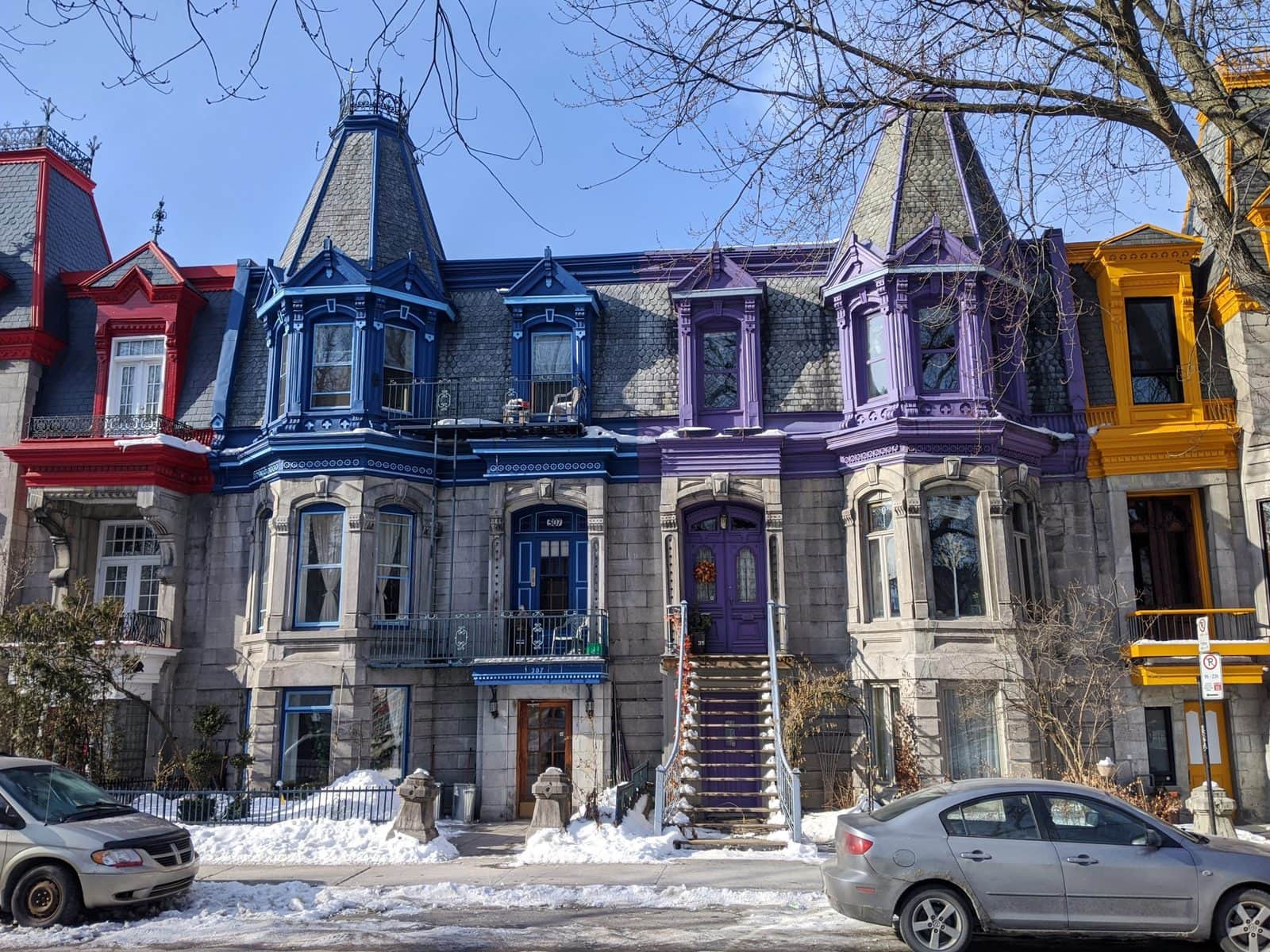 Quebec’s official language is French, but you can get by very well with just English. As an Asian woman, it was actually difficult for me to practice French, particularly in Montreal, because most people would greet me in English (or respond to me in English when I greeted them in French).

If you want to speak French, I found that English is used slightly less in Quebec City than Montreal, so you may have more opportunities to practice.

I was blown away by Montreal’s cute cafes and restaurants, especially as someone who eats plant-based. There were so many great vegan restaurants. I personally loved La Panthère Verte and LOV for food, and for cafes, Le Petit Dep and Pastel Rita were so charming.

Quebec City food seemed to be a bit more traditional overall, and I didn’t find as many good vegan options. Sadly, the most memorable thing I ate was a vegetarian meatball sub from Subway, or maybe a sugar pie (tarte au sucre) from the grocery store haha.

I think this may be partially because I was staying in a residential area; there is definitely good vegan food in Quebec City, but it’s mainly in the city center, so I didn’t try as many restaurants and ended up cooking myself a couple times.

vegan bowl and poutine at La Panthère Verte in Montreal

Quebec City is further north, so it does tend to get a little colder/snowier than Montreal. If you’re visiting in the winter, the snowscapes are especially beautiful, and the city is quite festive-looking.

A perk of Montreal, however, is that it’s home to an underground city known as RÉSO, which is a network of metro stops, restaurants, shops, and more. Having the RÉSO can make big difference if you’re trying to shield yourself from the frigid winter or the humid summer. 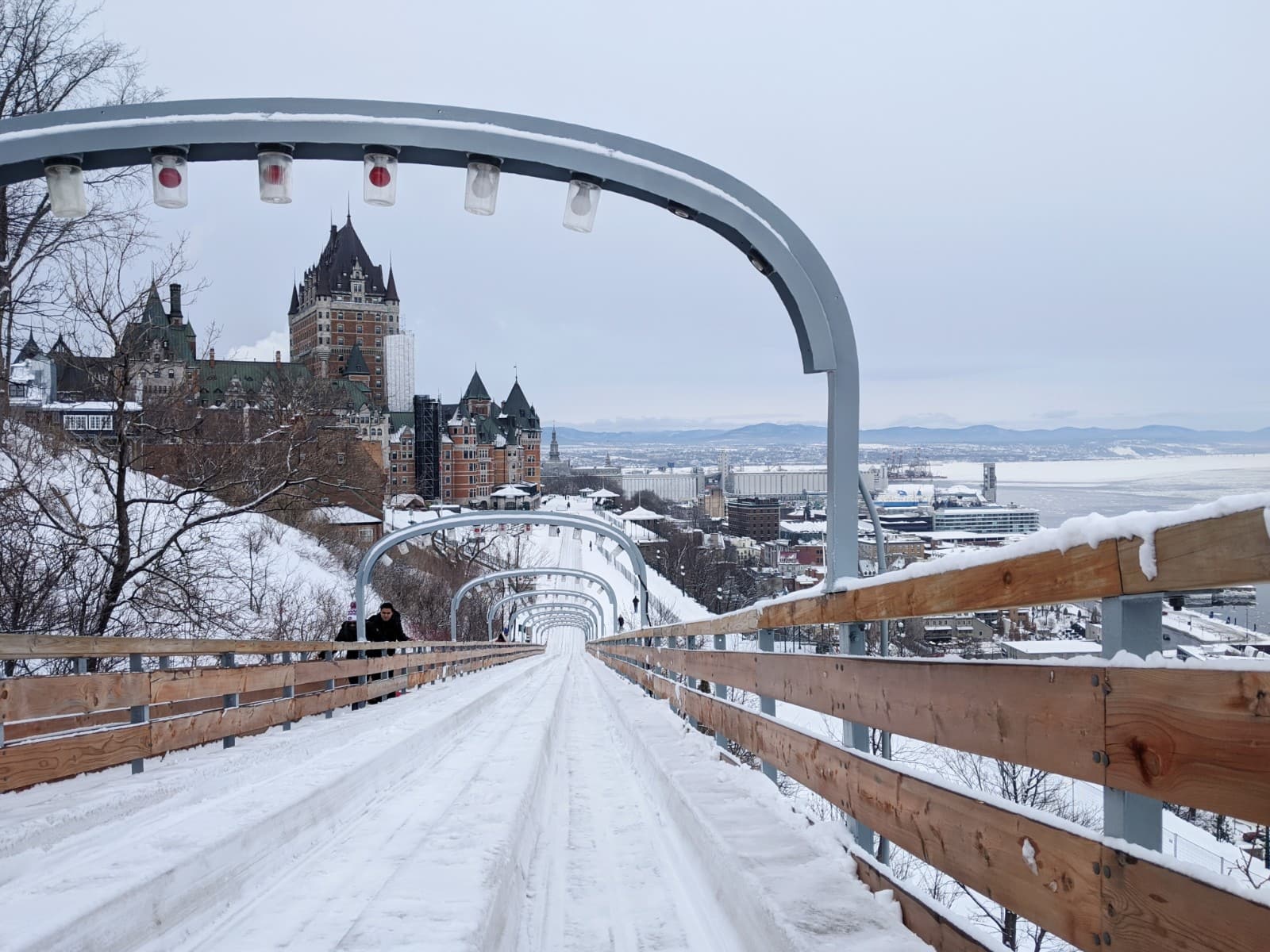 Finally, you want to consider the other places you have on your list for this trip.

Quebec City is closer to the Ice Hotel (a hotel made of ice and snow) and Montmorency Falls.

Montreal is closer to Mont-Tremblant, a ski resort and beautiful mountain town. It’s also just a couple hours from Ottawa, the capital of Canada.

The Hôtel de Glace, about 30 minutes from Quebec City

Montreal is a better choice if you’re looking for a more urban feel, amazing food and cafes, and a more bilingual city.

Quebec City may be better if you want a charming old town experience, all the major attractions in one place, and a festive winter holiday.

If I had to go back and pick only one, I’d say that my time in Quebec City was more memorable, though I really enjoyed the food I had in Montreal.

I also felt that there were a lot more things to do in Montreal. I spent 3 nights in Quebec City, and towards the end, I felt that I was ready to leave, or at least take another day trip. If I had to pick a city to visit again, I’d probably go with Montreal since there’s much more I haven’t discovered.

Ultimately, the choice is yours! Let us know what you’re considering or what you ended up deciding!

I have winter travel guides for both Montreal and Quebec City, so check those out if you want a better idea of things to do. 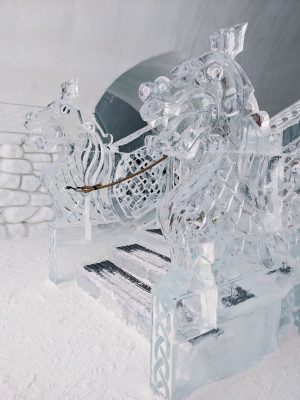 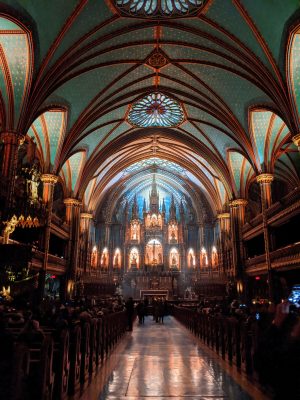 Is Aura Montreal Worth It? Review of the Notre-Dame Basilica Light Show 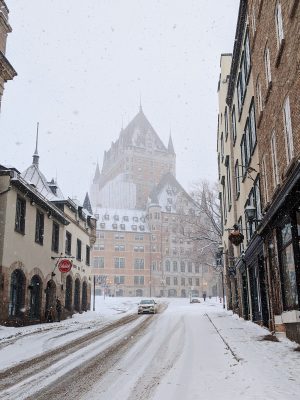 Québec City Winter Itinerary: Things to Do + Where to Stay