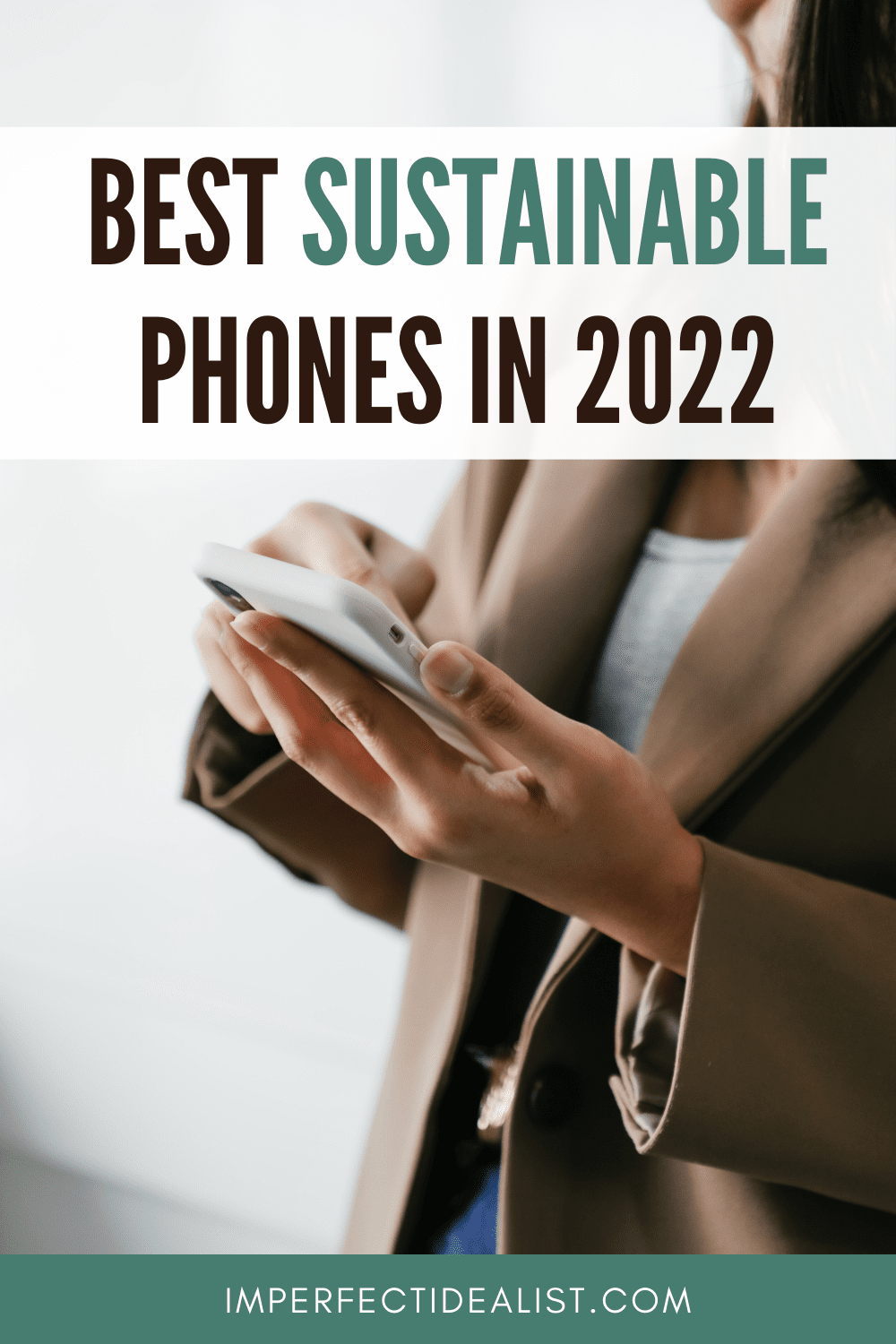 The cell phone industry is notorious for its use of forced labor and extractive mineral mining, leading conscious consumers to wonder whether there are more ethical and sustainable options.

In 2022, there are a couple eco-friendly phone options, but the market isn’t yet competitive.

Still, there are ways to approach your technology more mindfully, which is arguably more impactful than buying a specific phone model.

This post contains affiliate links, meaning I may earn a small commission on any purchases. Availability of affiliate programs did not impact the content of this post, as most product links are not affiliate, and buying nothing is always the most sustainable.

Current Eco-Friendly Phones on the Market

To be honest, there aren’t really sustainable phones that can compete with mainstream options. The sustainable options lag behind in performance and photo quality, and I wouldn’t recommend them unless you’re a light phone user.

So, I’d first recommend used/refurbished mainstream phones, and then I’ll list some emerging sustainable options that might work for some folks. Keep reading for tips to care for your phone as well, as sustainability is ultimately not about consuming, but about reducing consumption and advocating for larger-scale changes.

Because people cycle through tech quickly, there’s an ample selection of used models in good condition. Buying used tech is not only more eco-friendly, but also cost-efficient. You can typically save a few hundred dollars off the original retail price!

I previously bought one of my phones used on Swappa, and it worked just as well as the new phones I’ve gotten (I specifically looked for one in “mint” condition). If you do search for a used phone, I recommend using Swappa or eBay. I find Swappa a bit more trustworthy because they manually approve listings and have 24/7 support.

Just keep in mind that you may not be able to keep a used phone as long as a new one because of battery life and limited security updates (that’s planned obsolescence for you). Look for a phone with at least 85% battery capacity and security updates for at least the next 2-3 years.

If you want a quality, used phone with longer updates, look for an iPhone 12 or Samsung Galaxy S21, as they were released in 2020-2021 and have at least 4-5 years of updates from the release date. For more affordable options, you can go back a model or two, but double-check when their updates end.

Fairphone is a modular phone, meaning that its parts can be changed independently, making it easily repairable—in fact, Fairphone sells separate parts on its site. The latest model (Fairphone 4) has extended warranty for 5 years if you purchase by the end of 2022.

Beyond sustainability, Fairphone takes care to source its materials responsibly, tracking 14 major materials. They often source from ethical artisanal mines when recycled materials aren’t available, though they admit they’re not 100% perfect and working towards fully sustainable materials. The company is also a B Corp, which means they’re rated highly for social responsibility. (Though it’s worth noting that their GlassDoor reviews and reputation as an employer aren’t always raving).

The Teracube 2e is another modular phone that has a replaceable battery and is made from recycled materials. It has 64GB of storage, 3 years of updates, and 4-year warranty.

I wish they would provide more transparency into their process, as they don’t share much about which materials are recycled and what percentage. It’s also unclear if they source the precious metals responsibly, which would make it only marginally better than traditional phones.

4. Mainstream phones with some sustainability measures

Big companies like Apple are listening to consumers and starting to create more sustainable phones. In the latest iPhone 13, 98% of the rare earth elements are recyled. Apple also requires its suppliers to sign a code of conduct and participate in yearly audits (though Apple doesn’t share how their suppliers perform in those audits).

Now, Apple is far from a sustainable company. Heck, they’re known for intentionally slowing phones down during updates to encourage people to buy new phones. Until we see more evidence of holistic sustainability, I’d hesitate to recommend them fully, but it is good to see big companies pay more attention to material sourcing and fair labor.

Samsung is another big player in the cell phone space, and their Galaxy S22 and S22+ use 20% recycled ocean-bound plastic, plus some recycled materials in other parts of the phone. This isn’t as exciting as they make it out to be, but it’s better than nothing (though some may call it greenwashing, which is also fair).

6 Tips for Taking Care of Your Phone Sustainably

Whether the eco-friendly phone options do or don’t work for you, there are still several ways you can approach technology more sustainably, which arguably have a larger impact than what you end up buying.

Americans replace their cell phones every 2 years on average, and several countries in Europe follow a similar timeline. Sometimes these replaced phones no longer work, but oftentimes, they still work perfectly fine. I get it—having the newest features can be incredibly tempting.

To avoid potential FOMO, take the time to consider the features you want. In some cases, it may be worth spending a bit more money on the model you really like, and keeping that for longer.

Contract cell phone plans also often allow you to replace your phone every two years at a discount, and it feels like you’re paying “for nothing” if you don’t take that up. If you want to get off this contract cycle, I really like the pay-as-you-go company Tello. I’m on the $10/month plan, which gives you unlimited talk and text, plus 1GB of data. While I was in Europe, I really liked Lycamobile, which gave me the same thing for 5 euros/month. 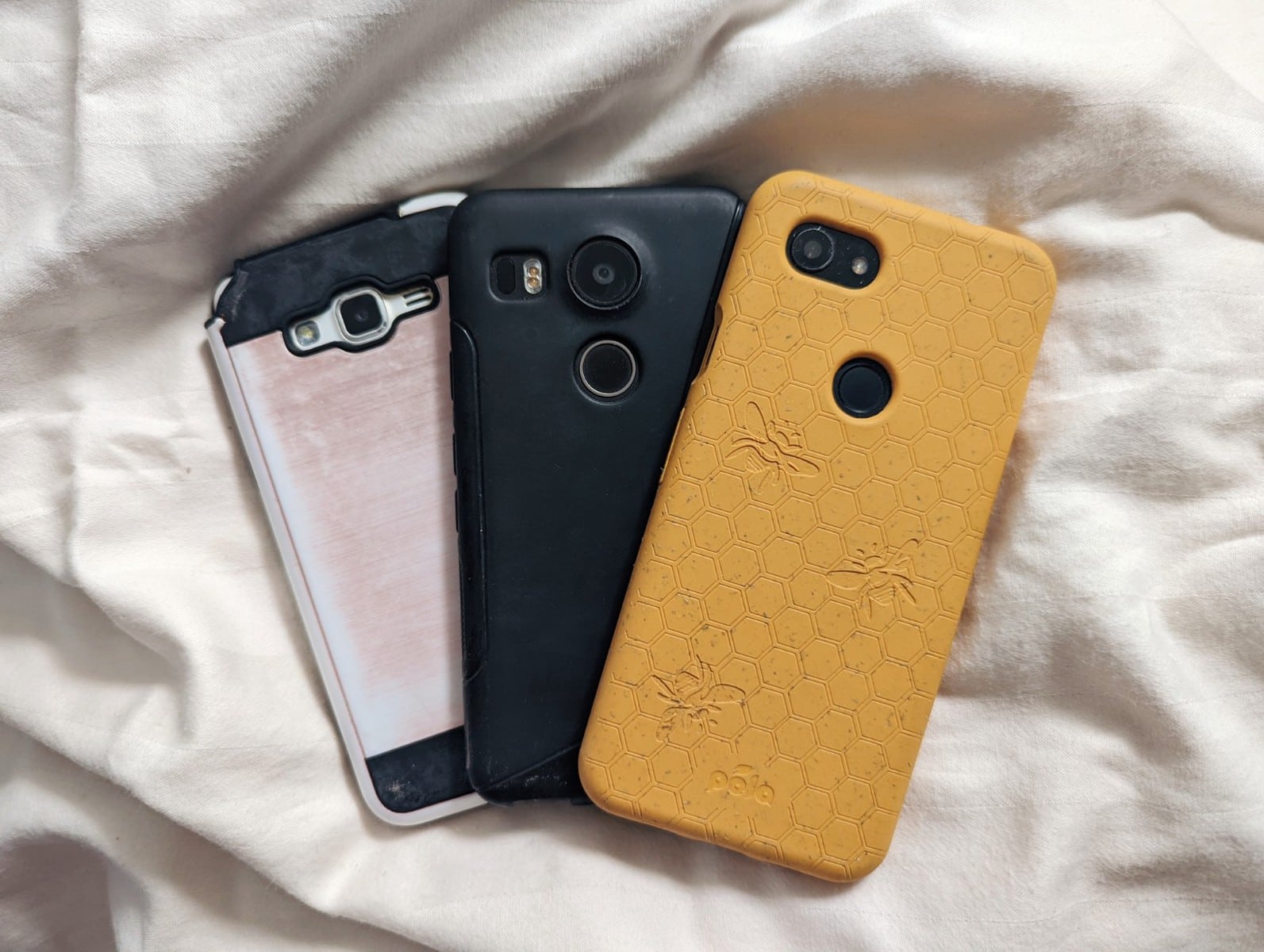 Battery life can deteriorate quickly, but you can preserve yours by charging up to 80% and keeping it above 20%. Experts say that this will keep your battery healthy for longer, as it’s actually not great for lithium-ion batteries to be fully charged or dead. You also don’t need to charge your phone all at once (unless you want to)—they say that charging 5-10% at a time is perfectly fine.

To keep your phone physically protected, you may also want to buy a tempered glass screen protector. I’m prone to dropping my phone and have had the screen protector crack, but I’ve yet to crack my phone screen (knock on wood).

It’s also important to get a protective phone case. There are some compostable options like Pela (iPhone and Android) and Casetify (iPhone only), but compostable cases aren’t the most protective. I actually recently opted for a standard case that’s sturdier, as Pela didn’t offer any for my model at the time, and I also wanted to make sure my phone would be protected. A broken phone outweighs any environmental benefit of a compostable case.

Many common tech issues can be fixed, whether you have a cracked screen or camera. If possible, go to an authorized repair shop for your phone company since they’ll have the original parts.

Unfortunately, repair isn’t always easy or cost-effective. Mainstream phones aren’t modular, so replacing one part usually means replacing a bunch of parts. When I wanted to repair the camera lens (not the camera) of my Pixel 3A, the authorized repair shop said it would cost $150—the price of a whole “new” used Pixel 3A—because they would have to replace the whole back of the phone.

That said, I have had a good experience getting my laptop screen repaired a few years ago, and I used the laptop for 3 years after that.

So, call around to get quotes, and maybe check with your tech-savvy friends who you trust.

You can turn your old phone into an emergency backup phone, which can be useful during outdoor trips. All phones are required to be able to dial 911 even without a SIM card or service plan. This can be helpful if your main phone runs out of battery during the trip. 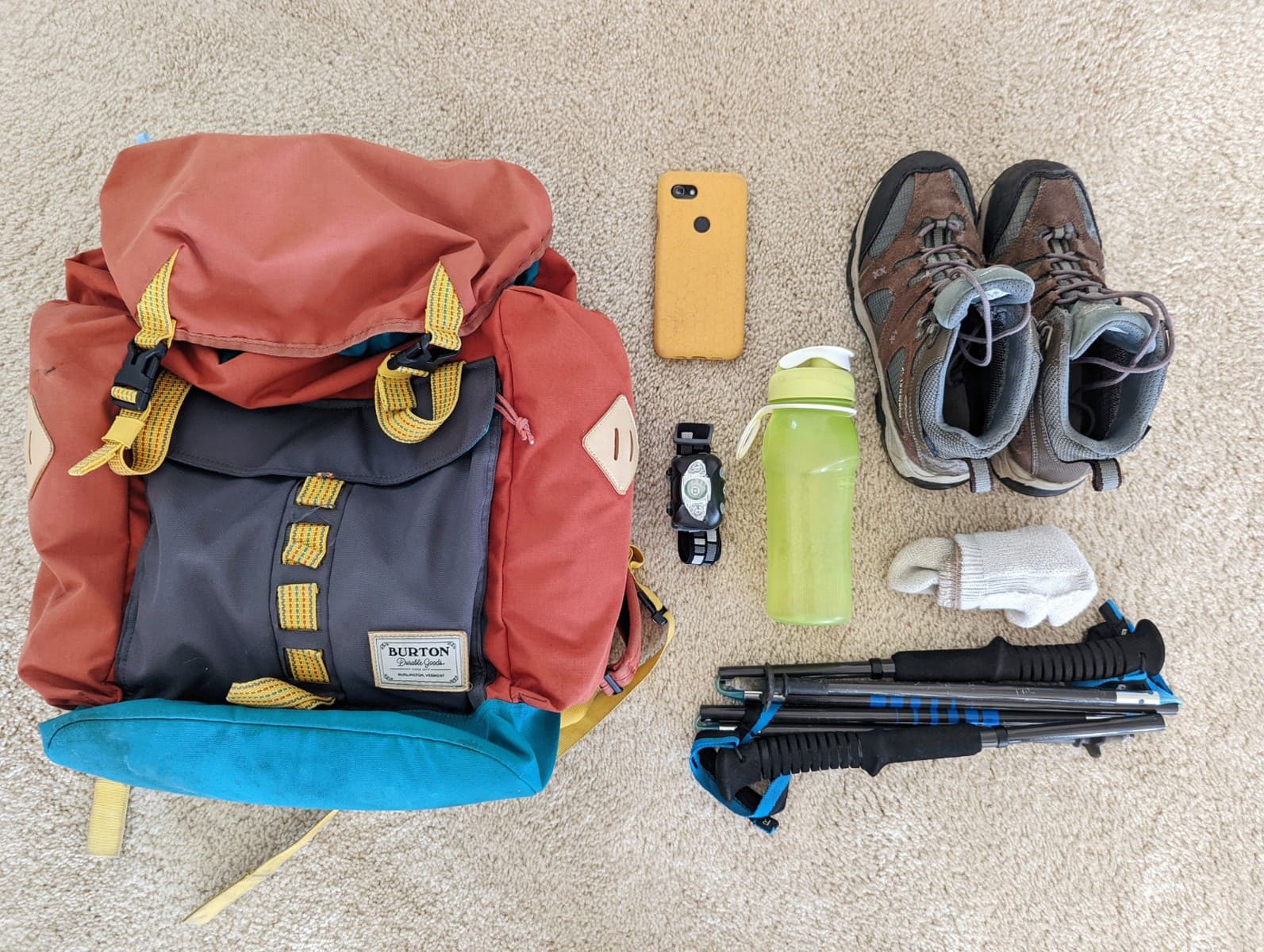 If you have an older Google Pixel, you can also turn it into a free Google Photos backup machine. Google got rid of its unlimited cloud storage after the Pixel 5, but you can sync folders to an older Pixel to still get free photo backups.

Otherwise, if your phone is still functional, you can consider selling it or giving it away (make sure to factory reset it first!). I like Buy Nothing or mutual aid groups for giving things away, and there may also be local charity programs near you.

If your phone doesn’t work, some individuals may still want it, so it doesn’t hurt to post. Otherwise, EcoATM and Best Buy recycle old phones in the US. Recycling tech isn’t the most efficient thing to do, however. Only around 20% of e-waste is estimated to be properly recycled. The rest ends up dumped in the Global South, where it pollutes the environment and causes health problems for locals. So, I’d recommend this only if your phone is really old or unfunctional.

You shouldn’t feel guilty about the barriers to buying phones sustainably and recycling them properly. If you’re taking care of your phone and reducing your upgrades, you’re doing great already.

In fact, just to show you how it’s so difficult to make “perfectly sustainable” choices, I’ll share that I recently bought a new Google Pixel 6.

My Pixel 3A’s camera lens had cracked, so I got it repaired for $50 by a non-authorized repair shop. That was a fine price, but they didn’t do the greatest job (the lens didn’t lie flat), so it cracked again without me dropping it.

After the second time my camera lens cracked, I went to an authorized repair shop for a quote. As I said, they quoted me at $150 since they’d have to replace the whole back of the phone (the original parts simply don’t come separately). At that point, it didn’t make financial sense to repair, especially with the phone’s security updates ending in few months.

I wanted to buy a used Pixel 5 to replace my broken phone, but I decided to go for the new model because of its extended security updates (the Pixel 6 has updates 5 years from the release date instead of 3 years, and I’m partial to Google phones because of their photo quality).

I’m sharing this because these decisions aren’t black or white, and there are so many barriers to keeping your phone as long as possible.

So, what do we do? There is a movement lately in the US for Right to Repair legislation. Manufacturers have been able to limit access to repair by claiming that it violates their intellectual property rights. By limiting access, they can control the repair market and charge high prices, or push you into buying a new phone. Several states have active Right to Repair bills, and supporting your state’s bill can help improve the sustainable technology landscape.

Let us know if you have any other sustainable phone or technology tips!

If you’re interested in other aspects of sustainability, check out my sustainable fashion and living posts. 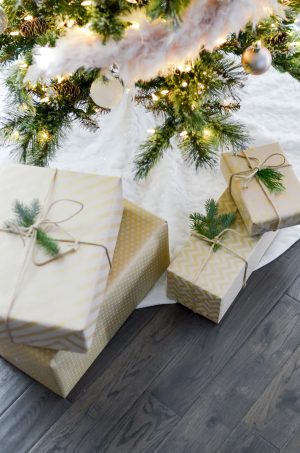 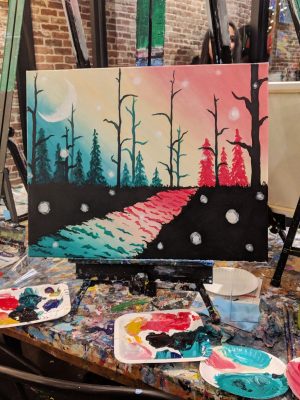 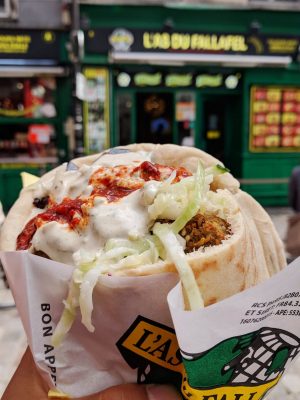 Is it Hard to be Vegan or Vegetarian in France?