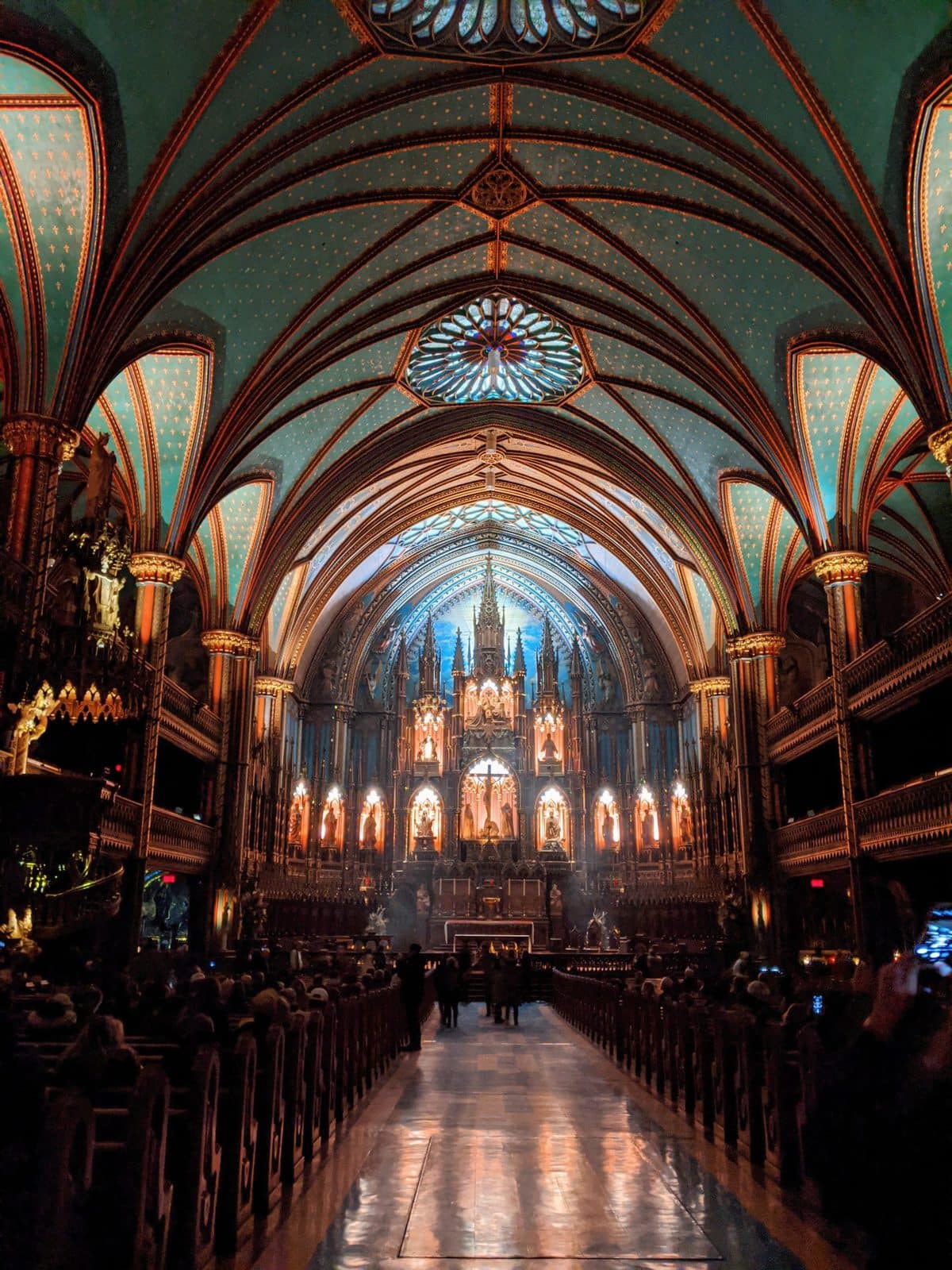 I recently took a trip to Montreal from Boston, and I went to see the Aura light show at the famous Notre-Dame Basilica. In post, I’ll be sharing whether I think Aura is worth the money, as it’s actually pretty expensive (at least by my cheap recent college grad standards haha).

What is Aura Montreal?

The experience reminds me a lot of la Fête des Lumières, or the Festival of Lights in Lyon, France, where there are many light shows projected against major landmarks in the city. The displays work with the architecture of the buildings to create all kinds of animations set to music. This is basically what you get with Aura Montreal, except it’s indoors and in one building.

Aura is split into 2 parts that are supposed to take 45 minutes total, but the experience actually lasts more like 30 minutes. In the first part, you’re welcome to walk around the Basilica and admire the artwork, which is animated and illuminated by lights. You get around 15 minutes for this before the actual light show starts, which lasts exactly 17.5 minutes, according to an online review. During the the light show, you sit in a pew and simply watch as the Basilica is illuminated to very dramatic music. You’ll see scenes like the four seasons, and there’s even this cracking effect across the architecture at one point. 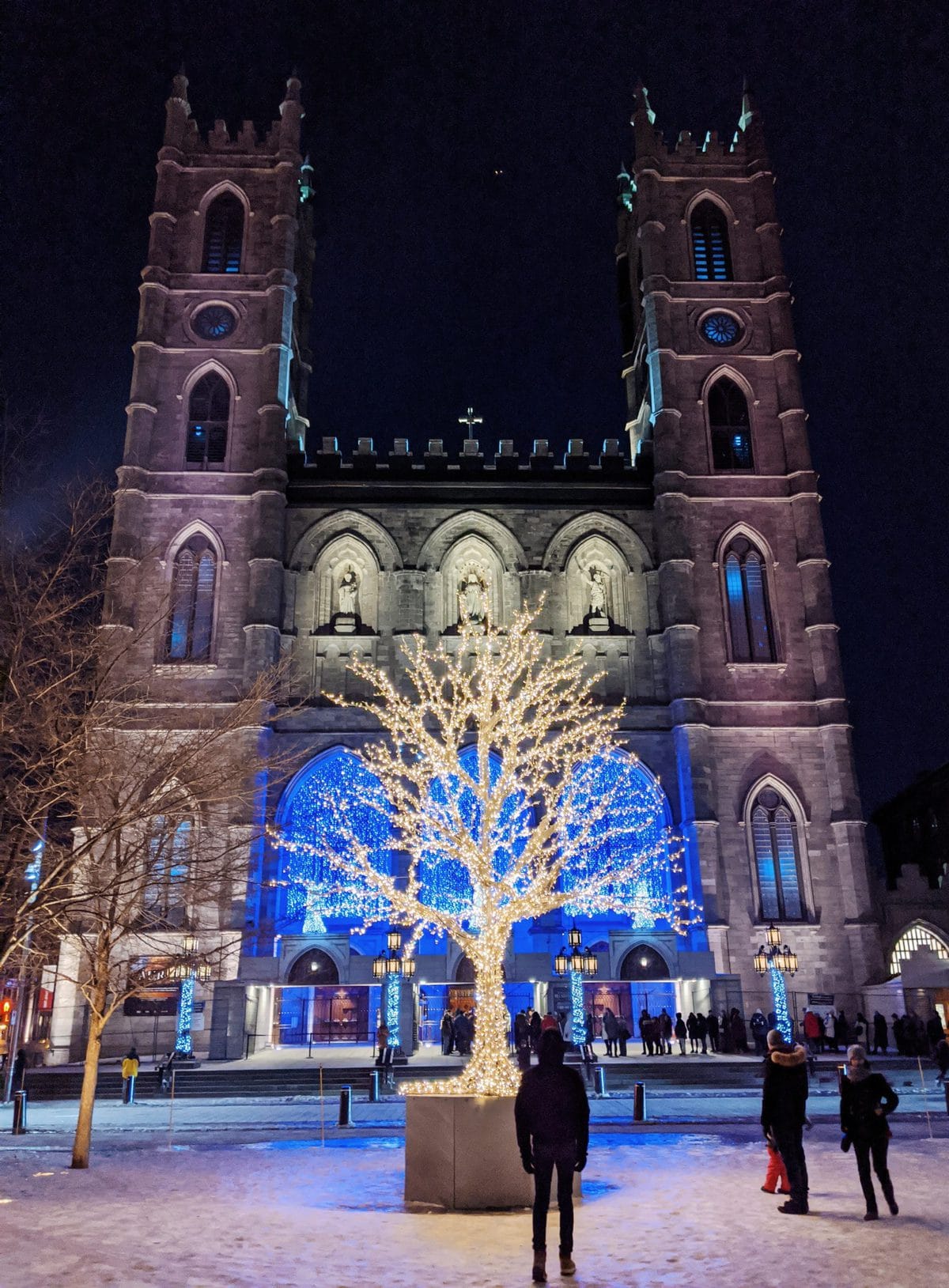 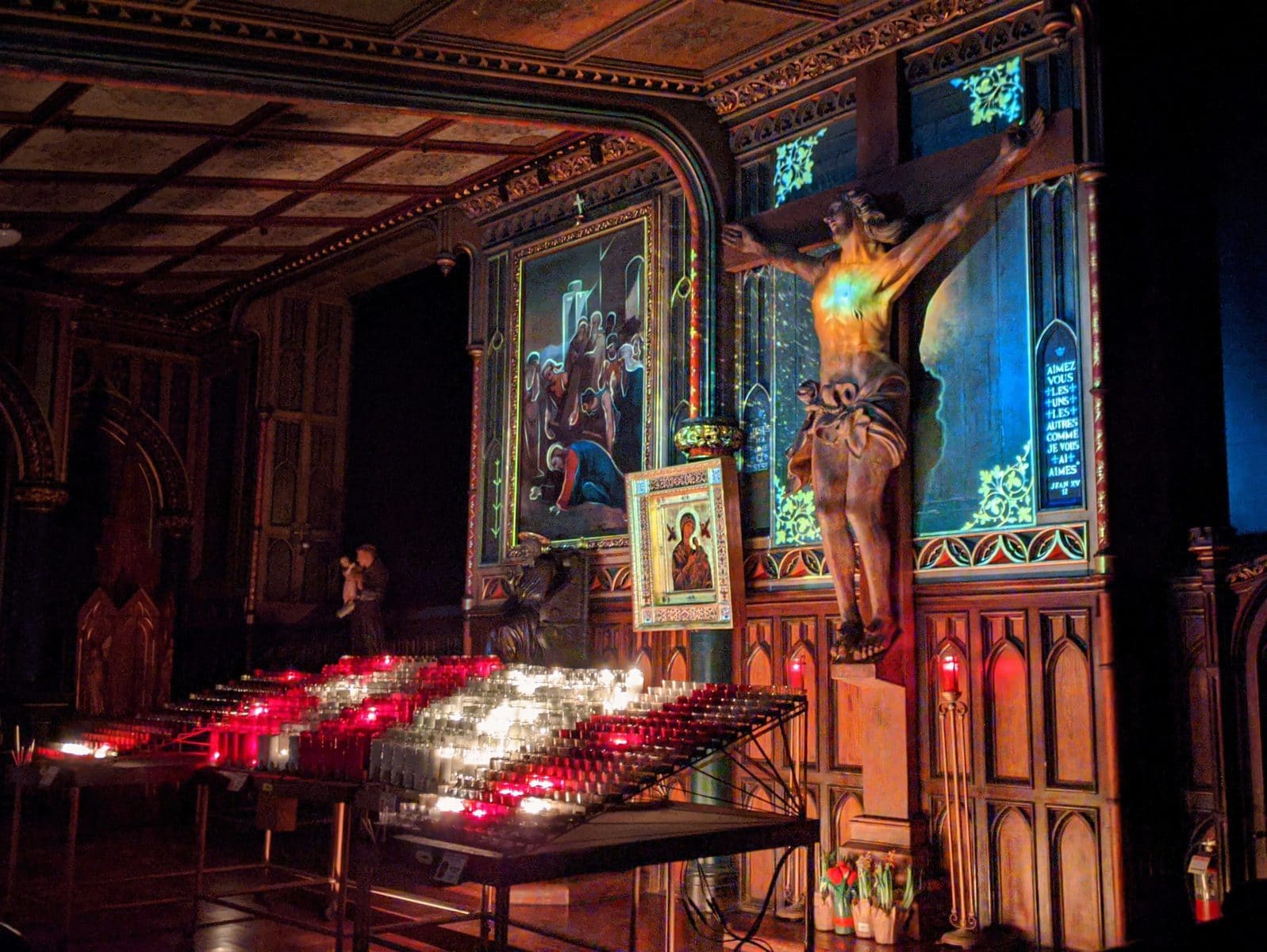 If you have epilepsy, you should probably avoid Aura, as there are many flashing lights at one point. If you have really small children (under 5 or 6 years old), I’m not sure that I’d recommend it either, as the show can be pretty dramatic, loud, and dark—I think would’ve been scared as a small child.

You’re not technically allowed to film or take pictures of Aura, but tons of people had their cameras out in the beginning, during the multimedia displays. I also got some sneaky video clips of the actual show for this blog review and my YouTube channel. I don’t usually break the rules, but I made sure not to use flash to preserve the artwork, and also made sure that no one is identifiable in the footage. I’ll be a rebel just this one time for the purposes of this review 🙂

If you’re interested in seeing video footage of the show, there are a few clips in my YouTube Aura Montreal review (which is basically a video version of this post).

How Much Does the Aura Light Show Cost?

Like I said, Aura is not a cheap experience. Here’s a table of costs in Canadian dollars and US dollars (keep in mind that these are current exchange rates as of February 2020).

One thing to note: to get into the Notre-Dame Basilica at all, even not during Aura, you have to pay 10 CAD for adults, and 5 CAD for kids (includes a tour, and you can take photos). So, if you’re deciding between Aura and just visiting the inside of the Basilica, know that you’ll have to pay either way. Entry is free during prayer hours and Mass, but you won’t be able to take photos. 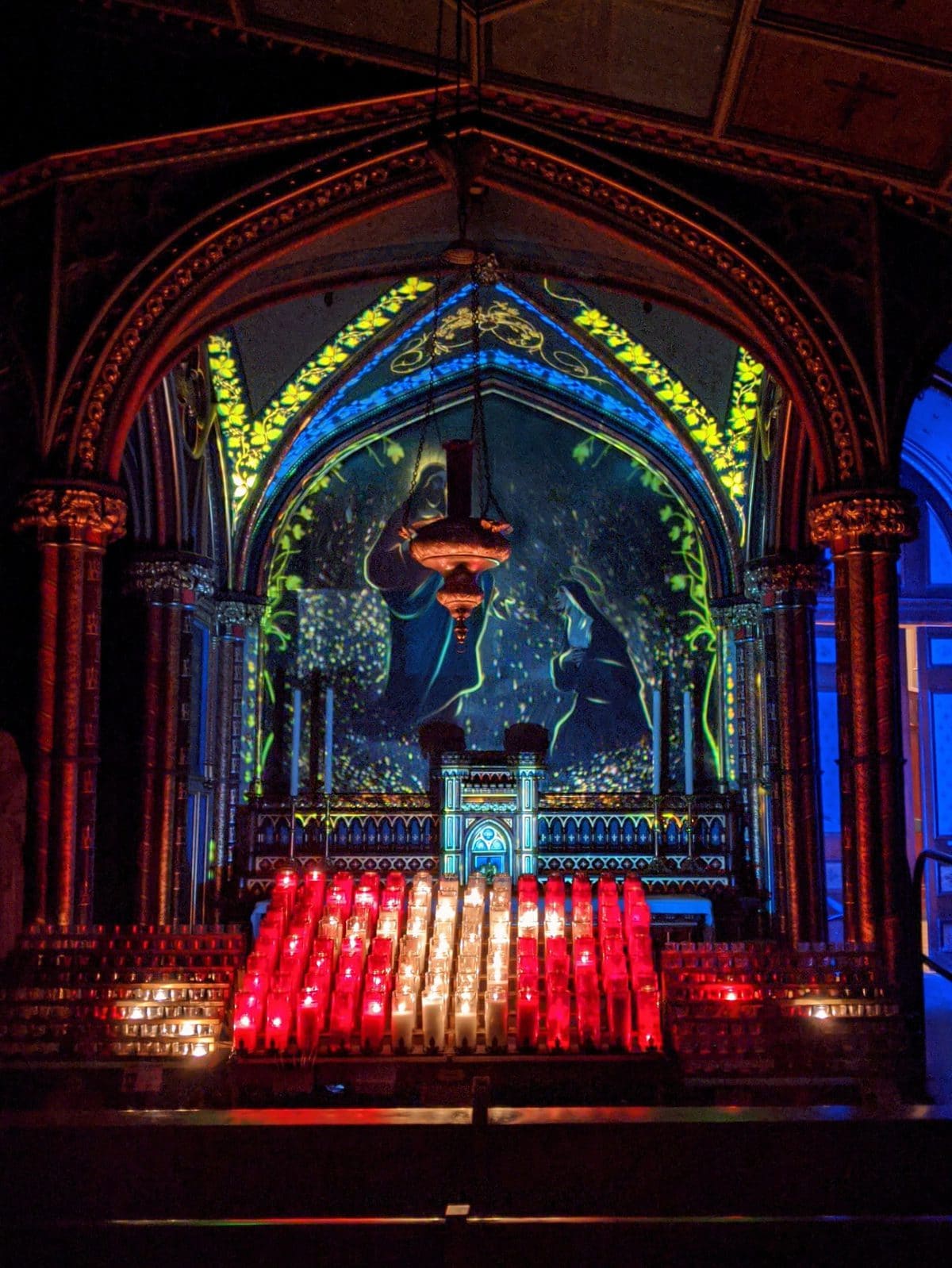 When is Aura at the Notre-Dame Basilica?

Aura is nearly every day at 6pm except Sundays, and some days have two shows: one at 6 pm, and another a couple hours later. You should always check the schedule though, as there are days that don’t have a show, especially if you’re visiting in January.

You can buy tickets online beforehand at least one day before the show. You can also get them at the box office right before the show, if they’re still available. I bought mine in-person since I decided to go last-minute, but you should try to get them online to save some time, and in case tickets are sold out. 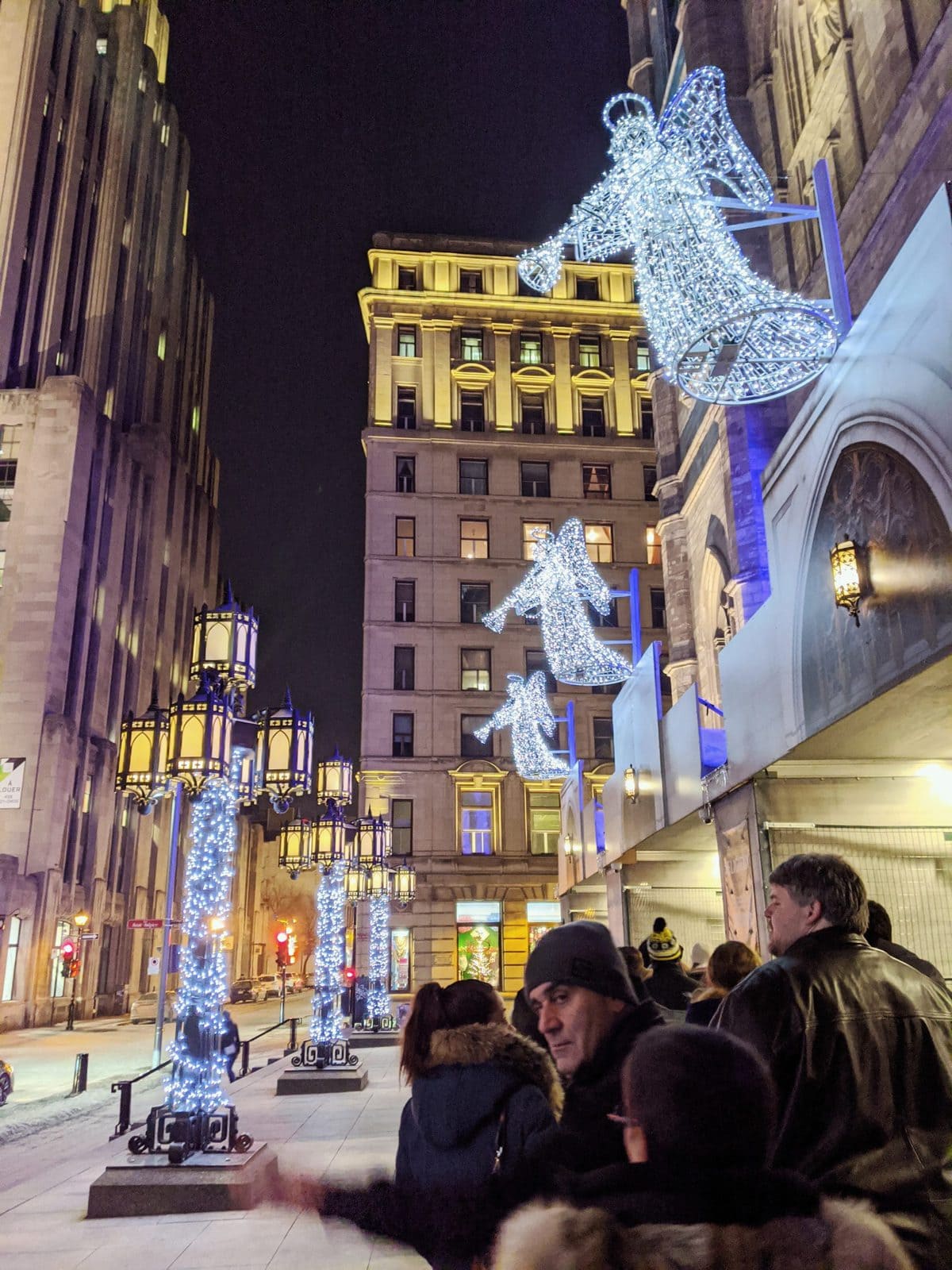 Is Aura Montreal Worth It?

Judging by online reviews, it seems like people are either pretty disappointed by Aura, or incredibly moved by it. Some people even say they get emotional and shed some tears.

Personally, I would say that Aura is not worth it. I just don’t feel that the experience justified the 22 USD price tag. That money could buy two quick meals, or a pretty nice meal, and I would’ve gotten a lot more joy from that. That’s not to say I didn’t like Aura—I thought it was a good experience, but I didn’t find it especially impressive or moving.

This might be because I’ve seen something similar before at the Festival of Lights in Lyon, so it wasn’t as unique of an experience to me. I did find the Basilica really beautiful though, and I’ve seen a lot of church interiors, especially after living in Europe.

Because of the high price, I just think that Aura probably isn’t worth it for a decent amount of people. I don’t know the costs associated with running the show, but if you asked me to put a “fair” price on the experience, I’d say 10-15 USD (13-20 CAD). And this is not to say that I devalue art. I paid 22 USD for Chihuly Garden and Glass in Seattle, and thought that was totally worth it. Aura Montreal just didn’t really speak to me, and if I could go back, I probably would skip it. 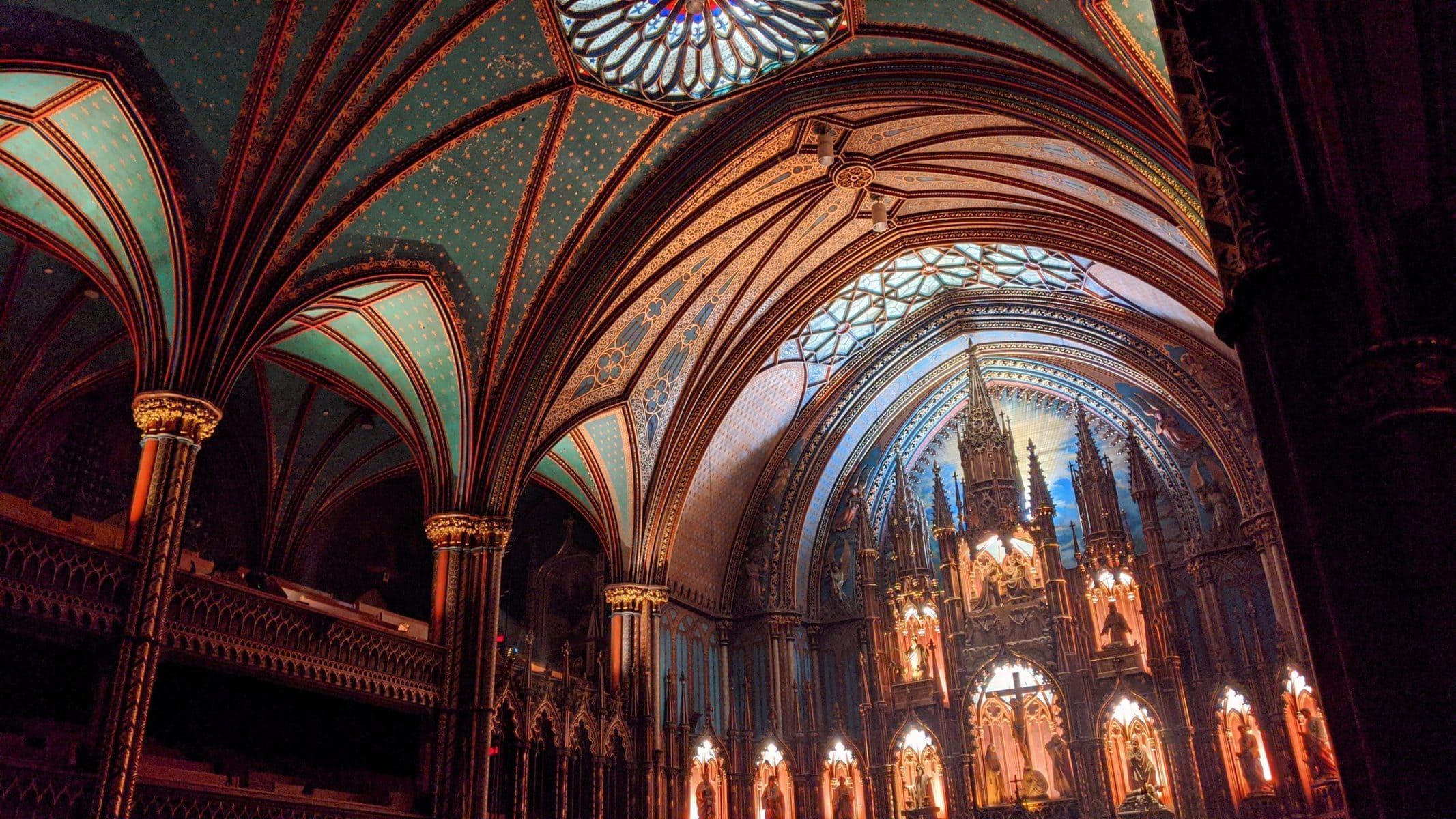 That said, the show could be worth it for some people, especially if you find cathedrals really impressive, religious artwork really moving, and if you don’t think you’ll have the chance to experience a similar type of show. These light shows are pretty common in Europe, but not so much in North America—and a ticket to Aura is way cheaper than a plane ticket to Europe! Another scenario where Aura might be worth it is if you’re also already planning to visit the Basilica during the day and pay 10 CAD for a ticket. In this case, it might be worth it to sort of “upgrade” and go to Aura instead for 20 CAD more.

I hope you found this review helpful! If you’ve been to Aura Montreal, or if you’re considering it, let me know your thoughts, and if you have any questions. 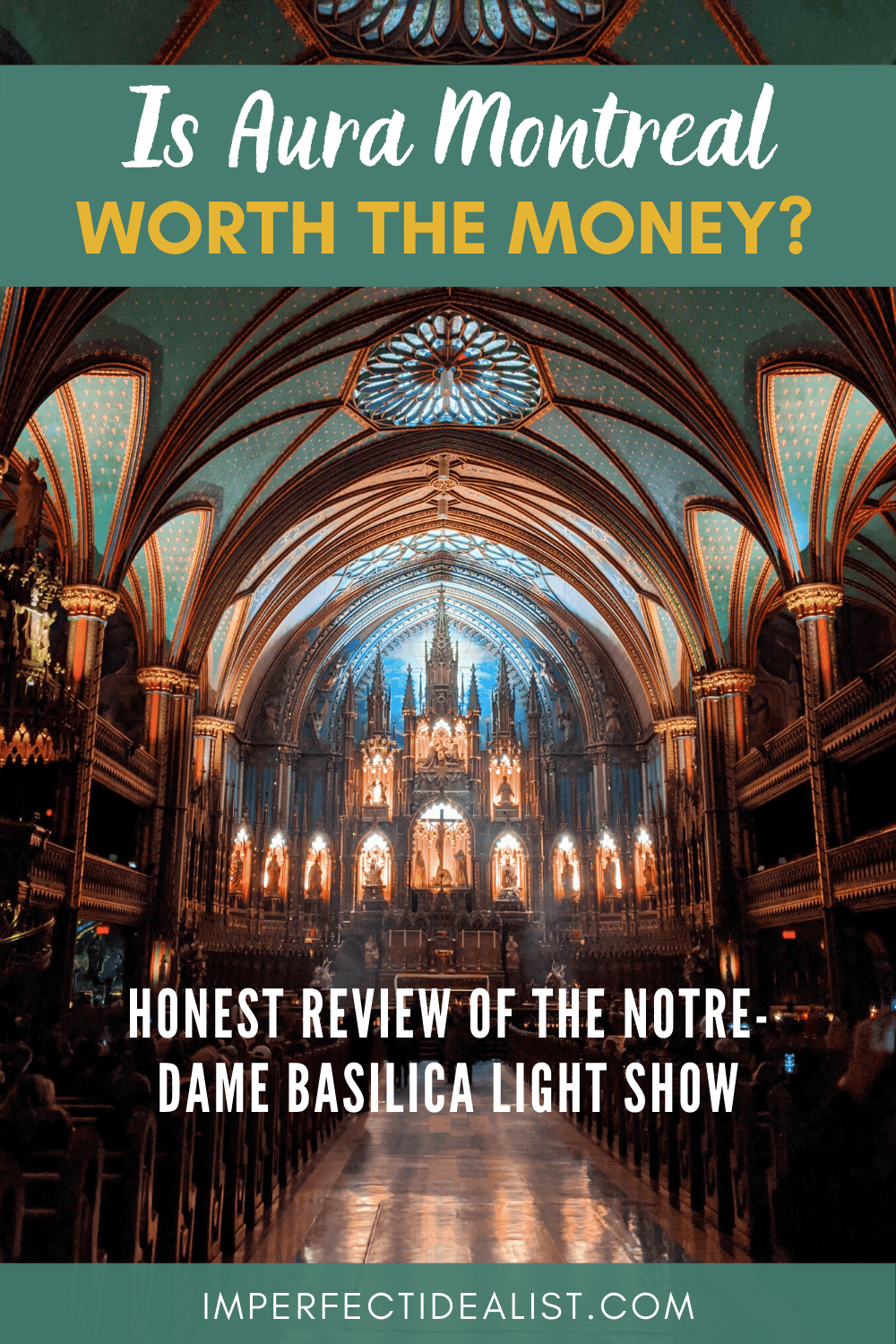